Will new water-saving measures at Egypt's mosques help save water?

The Egyptian ministries of religious endowments and water resources and irrigation are collaborating on a new project to install water-saving nozzles in mosques and churches in order to rationalize water consumption. 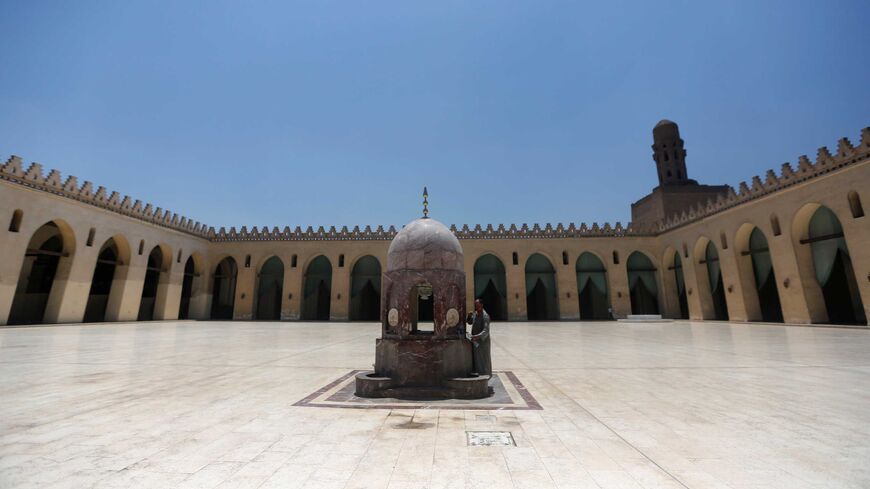 An Egyptian man washes his body before prayers at Al-Hakim bi-Amr Allah Mosque in Cairo, Egypt, May 17, 2018. - REUTERS/Amr Abdallah Dalsh

This pilot experiment is financed and executed by the Ministry of Water Resources and Irrigation in preparation for the installation of water-saving nozzles in mosques throughout the country. It is part of the ministry's water consumption rationalization plan launched in December 2017.

In a statement issued by the ministry Nov. 15, Ati affirmed that the water-saving nozzles, which are available in different sizes to fit all faucets, are easy to install. He said that the nozzles automatically regulate the water flow and are expected to save around 75% of water and reduce waste.​

The head of the Ministry of Water Resources and Irrigation telemetry unit responsible for assessing the experiment, Ayman al-Sayid, told Al-Monitor, “We are assessing the experiment on the faucets at El Sayeda Nafisa Mosque by measuring the quantities of water used before and after the installation of the water-saving nozzles. We read the water meters on a weekly basis. The ministry’s experiment targets places of worship, mosques and churches with large gatherings of worshippers. The experiment also aims to spread the culture of water rationalization to mosques and churches.”

Sayid said that the ministry’s water consumption rationalization plan includes the installation of water-saving nozzles at government departments, schools and universities. At a later stage, the nozzles would be made available to citizens at an affordable price to encourage the demand. “This is not our only mechanism to rationalize the use of water in Egypt in light of the severe deficit in our resources. But we have a number of other mechanisms such as the use of modern irrigation methods to reduce water use in the agricultural sector, which consumes 85% of our water resources,” he added.

Sayid noted that the experiment, if applied nationwide, would not only rationalize the drinking water quota in Egypt, which does not exceed 10 billion cubic meters of water per year, but it "would also reduce the cost of drinking water purification."

He added, "It would save on energy required to pump water to stations and then inject it in water networks to reach households.”

Al-Monitor visited the ablution area for men at El Sayeda Nafisa Mosque and met Ismael Qorni, who has cleaned the mosque as a volunteer for 25 years.

Qorni said, “The new water-saving nozzles were installed on 51 ablution taps and they reduce the quantity of water used in ablutions. They were also installed on 29 bathroom sink taps and three urinals. Twenty-five nozzles were installed in the women’s bathrooms. But these new pieces affect the cleanliness of the toilets. Cleaning these places requires a strong water flow to eliminate germs. Toilet users have been complaining about the slow water flow, which affects the personal purity of the worshippers who perform ablution.”

He said, “Cleaners use buckets filled with water and soap. This cleaning method does not waste water. They have been using these buckets before and after the installation of the water-saving nozzles.”

Al-Monitor spoke to the imam of El Sayeda Nafisa Mosque, Ali Allah al-Jammal, who said, “Although I am the imam of the mosque, I do not know the amount of the water bills so that I can assess the experiment. Water meter data is sent to the Directorate of Endowments in Cairo that pays the water bills.”

Jammal added, “The imam’s preaching functions cover prayers, donations, vows, the affairs of the shrine of El Sayeda Nafisa, the center of fatwas and memorization of the Quran, in addition to security matters. These functions prevent the imam from attending to other administrative matters at the mosque such as following up on water and electricity bills or maintenance of the building. The Ministry of Endowments has introduced the position of an administrative manager for large mosques. This allows the imams of these mosques to devote their time to preaching. This is the case at El Sayeda Zainab Mosque in Cairo. Soon this new position will be introduced to all large mosques across Egypt.”

He stressed that the Ministry of Endowments pays close attention to the issue of water rationalization, as one sermon every four months and a weekly lesson are dedicated to this topic.

Sharaki pointed out that the Ministry of Water Resources and Irrigation has been trying for years to find solutions to provide financial resources for the development of the old irrigation networks. He called on the ministry to focus its efforts on ensuring the maintenance of pumping stations, reducing evaporation and ensuring the maintenance of canals to prevent leakage.

He also called on the ministry to develop crops of the same species cultivated in Egypt that consume less water and are more resistant to climate changes. In addition, Sharaki urged the ministry to direct farmers to grow crops that need no more than the available quantity of irrigation water.