The head of an international association for Islamic preaching has proposed an initiative to annex theater halls to mosques in Egypt, stirring controversy among the country's religious institutions. 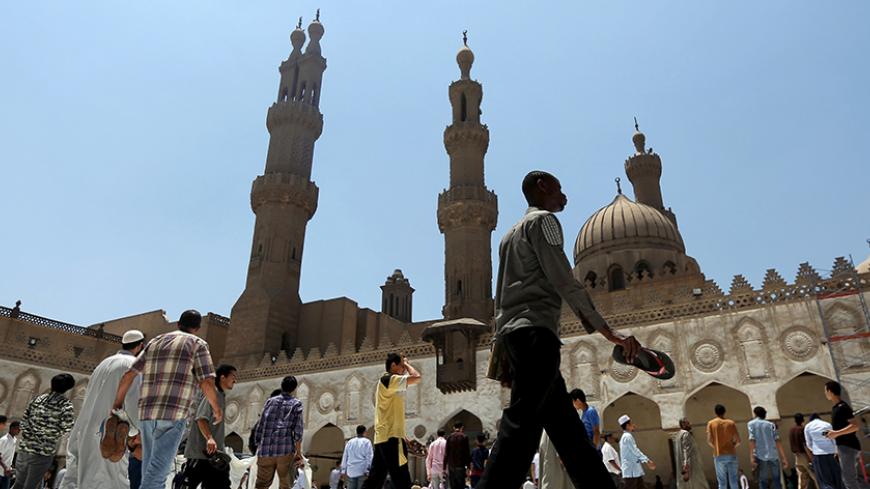 CAIRO — In a press statement Aug. 16, the head of an international organization concerned with the quality of Islamic preaching proposed the idea of “mosque cinemas,” as they are known in the media. It seems that Othman Abdel Rahim did not expect his initiative to receive as much criticism as it has.

Rahim is secretary-general of the Global Association for Ensuring Quality and Assessing Performance of Islamic Preaching, or ITQAN, which is involved with the evaluation and development of religious discourse through the training of Islamic preachers and imams. Its headquarters is in Brussels, with branches in many countries, including Egypt. It is funded by the endowments ministries of several countries as well as the donations of Islamic associations.

Abdel Rahim demanded that the role of the mosque not be limited to worship and for mosques to become “cultural enlightenment centers” and pursue development projects. He added, “Inside the mosque, there should be a Sharia-compliant theater and cinema hall, in addition to development projects. The mosque values should be transmitted to the people through development tracks that use words, images and poetry within Sharia limitations.”

Abdel Rahim noted in the same statement that the theaters should not be inside the mosques but annexed to them, and that their role be limited to displaying social awareness and educational material.

Despite Abdel Rahim’s clarifications, the undersecretary of Awqaf Ministry in Alexandria, Sabri Abada, said in an Aug. 17 interview on ONtv's program al-Sada al-Mohtaramoun that establishing cinemas and theaters in mosques is “nonsense.” Abada explained his stance in a conversation with Al-Monitor, saying, “Mosques are reserved for prayer and worship and must not be involved any other activity, as per Sharia.”

During the show, an altercation broke out between him and Abdel Rahim after Abada accused the latter of treason and of implementing foreign agendas. He also accused ITQAN of deception and of receiving funding and support from an enemy state he did not name.

In an Aug. 16 press statement, Yasser Borhamy, deputy chairman of the Salafist Call, criticized the idea of turning mosques into “cultural centers,” in Abdel Rahim’s words.

“Mosques were established to pray and remember God,” he said, citing a verse from the Prophet Muhammad's hadith, which reads, “Selling or buying in a mosque is not blessed by God. Mosques were only built for that which they were built — praying, remembering God and reciting the Quran.”

Abdel Fattah Idris, who teaches Islamic Sharia at Al-Azhar University, told Al-Monitor, “Mosque management's supervision of theatrical and cinematic shows, as well as cultural and sports events, in a place other than the prayer hall, does not violate Sharia. The evidence Borhamy put forward about banning the establishment of cinemas and theaters refers to the prayer hall. But if these [theaters] are annexed to mosques from the outside, there is no reason to ban them, just like event halls that are annexed to mosques.”

“These activities will help engage children and youths in mosques and will allow them to practice the activities they like, under the mosque’s administration to protect them from deviance due to improper practice of these activities,” he added.

Islamic Research Council member Mohammad al-Shahat al-Jundi told Al-Monitor, “There is not one reason to forbid cinema and theater halls annexed to the mosques outside the prayer hall, provided they offer Sharia-compliant activities. In the days of the Prophet Muhammad, mosques were used to discuss ways to solve the social problems of Muslims. This can be done using animated shows or plays that are more enticing to youths, compared to lessons and sermons.

“The mosque was also used to preach to non-Muslims and to meet delegations from foreign countries coming to find out about the principles of Islam to adopt them. Theatrical shows and movies can serve the same purpose, but in a more attractive way. They can be tools to respond to the distortion of the image of Islam due to extremism,” he added.

Notably, Abdel Rahim’s calls to conduct cultural and artistic activities are not the first of their kind. During a March 14, 2014, phone interview on ONtv, actress Suhair al-Murshidi criticized the way mosques were being managed, saying, “There is terrorism in mosques, but not in churches. Churches have cinemas and theaters, while mosques have been deprived of culture, education and awareness.”

In the face of this controversy, the government stands silent. Abdel Rahim said in the same statement that his call is a suggestion to the Ministry of Awqaf, as part of a global project to improve the performance of mosques. Abada’s refusal of this initiative does not constitute an official reply from the ministry, as he is not its spokesman. Besides, Abada is at odds with the ministry’s leaders and has exchanged accusations with its undersecretary in Asyut of being sleeper agents of the Muslim Brotherhood, as a result of which they were both referred for investigation by the ministry in late August.

Al-Azhar’s stance is also ambiguous, as its deputy, Abbas Shouman, denied in an Aug. 25 press statement any relationship between Al-Azhar and Abdel Rahim or ITQAN, which he said Al-Azhar refuses to deal with. He did not disclose the reasons for this refusal, however. He added that some teachers and Al-Azhar sheikhs coordinate with ITQAN individually and that approval of Abdel Rahim’s project is the purview of the Ministry of Awqaf, rather than Al-Azhar.

The dispute between Al-Azhar and ITQAN dates back to March, when ITQAN established its Egypt branch. Egyptian Minister of Awqaf Mohammed Mukhtar Gomaa had called for ITQAN to be the entity tasked with defining the specifications applied to mosques and the religious curricula, as well as adopted by Imams. Al-Azhar professors rejected this call, considering it an encroachment on their authority, and announced that Al-Azhar is the only body responsible for these specifications.

It seems that the controversy surrounding Abdel Rahim’s initiative regarding the development of mosques was part of an intellectual conflict within Egypt's various religious institutions. Al-Azhar refuses to cooperate with ITQAN, although its scholars approve of the body and the initiative of Abdel Rahim. The Ministry of Awqaf’s undersecretary accused ITQAN and its secretary-general of deception and promoting foreign agendas, though the minister of awqaf himself is a member of the company’s board in Egypt and gave the green light for its establishment March 4.

It seems these conflicts will impede efforts attempts to improve mosques, although such initiatives have been applied in mosques around the world. For instance, the management of Turkey's Fatih Mosque organized theatrical shows in June 2012 and regularly holds a celebration to announce the beginning of Quran memorization sessions in the mosque. Al-Khair Mosque in Seiyun, Yemen, organized a celebration including sports competitions and art performances on a similar Quran memorization event.