In an effort to root out Muslim Brotherhood influence from Egypt’s 150,000 mosques, the Egyptian Ministry of Religious Endowments is imposing a unified Friday sermon for mosques throughout Egypt. 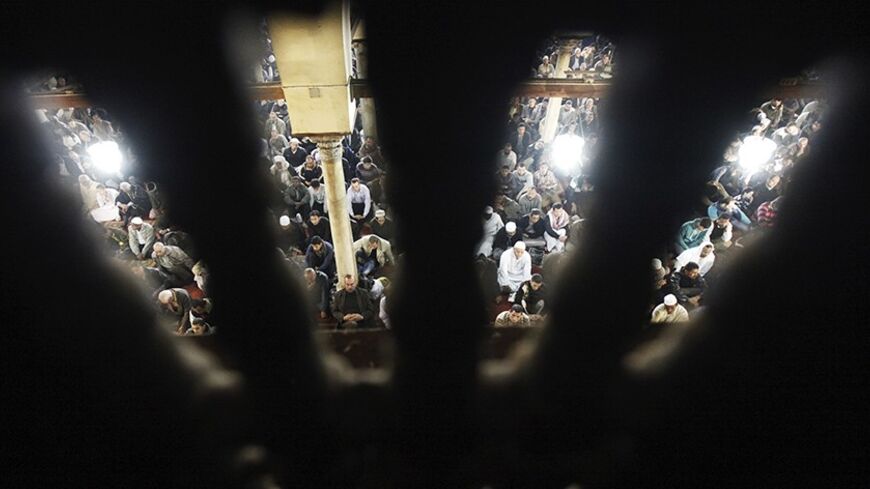 The Egyptian authorities and the Muslim Brotherhood are parties to the ongoing conflict on many tracks — in the streets, in universities, in the courts, in some state agencies — and now the conflict has moved to houses of worship.

The country’s mosques are the scene of one of the episodes of the conflict between the Ministry of Religious Endowments, which represents the state, and some clerics who represent the Muslim Brotherhood’s position of opposing “the coup and defending legitimacy.”

The Brotherhood’s tools inside the mosques do not differ from their tools outside: a harsh discourse that incites the masses against the current regime and that also calls on crowds to gather. Mosques sometimes act as outposts for Muslim Brotherhood snipers. Some have said that this is what happened to the Fatah Mosque when the Rabia al-Adawiya Square sit-in was broken up on Aug. 14, 2013.

The tools of the regime, on the other hand, are represented by the decision to enforce the laws, after they were amended to impose stiffer penalties. The authorities have dispatched clerics from the Ministry of Religious Endowments to the mosques that slipped from government control. Lately, the ministry has imposed harsh penalties for whoever deviates from its religious discourse.

As is usual in most conflicts between the two sides, human rights activists and those not affiliated with either side criticize both the Muslim Brotherhood and the authorities’ decisions.

The roots of the current conflict

Sheikh Ahmad al-Bahi, the coordinator of the Imams Without Restrictions movement, which seeks the independence of the imams from the Ministry of Religious Endowments, said that there are approximately 150,000 mosques in Egypt. According to Bahi, about 105,000 mosques belong to the state, while the rest are owned by either individuals or associations such as the Salafist Call, Ansar al-Sunna al-Muhammadiya and al-Jamiya al-Sharia al-Raisiya.

Bahi told Al-Monitor, “These mosques, from the moment of their inception, have been under the authority of the Ministry of Religious Endowments.” The ministry is responsible for issuing permits for associations and individuals to build mosques and for appointing imams to them, he noted.

Asked about the causes of the current conflict over the mosques between the ministry and some associations, Bahi said, “The ministry holds an annual competition for those wishing to enroll in the imams corps. They must have attended Al-Azhar Secondary School and graduated from Al-Azhar University. No more than 3,000 people a year are selected. The number of current imams do not exceed 60,000, in addition to some preachers who are hired by the ministry for mosques or have an agreement with the civil associations that founded the mosque. In all, there is a deficit of about 50,000 imams relative to the number of mosques.”

Bahi said that the current conflict is over the 50,000 mosques to which the ministry doesn’t send imams. According to him, those mosques are controlled by imams with known Muslim Brotherhood affiliations, regardless of whether those mosques were founded by individuals or associations. Some of them may even be Ministry of Religious Endowments mosques that got their imams when the Muslim Brotherhood was in power.

Bahi pointed out that the Sharia Association is very close to the Muslim Brotherhood’s orientations, while the Salafist Call and the Ansar al-Sunna stay away from political discourse inside the mosque.

Sheikh Mohammad Abdel Razek, the proxy of the Ministry of Religious Endowments, told Al-Monitor that the “idea of a unified sermon came because of the critical situation experienced by Egypt, which needs to unite. … So we decided to address a particular issue every Friday throughout Egypt. And this is done in coordination with the associations, which we repeatedly call to adhere to moderation because we are the only ministry responsible for reviewing religious discourse.”

Abdel Razek added that for the unified sermon the topic and its cornerstones are set and whoever does not adhere to them is prevented from rising to the pulpit until a ministry investigation is completed. That is if he was affiliated with the ministry, but if he was affiliated with an association, the mosque is placed under the direct supervision of the ministry or is sent an imam from the ministry to replace the imam from the association.

Amr Ezzat, the official responsible for the issue of freedom of conscience for the Egyptian Initiative for Personal Rights, told Al-Monitor that the unified sermon has existed for a long time but it was nonbinding and there was no penalty for those who departed from it. But now, according to Ezzat, the legal framework was toughened. That framework is how the ministry supervises the Friday sermons in mosques. The framework imposes a fine or jail time for those who depart from the unified sermon.

He said that the idea of a state monopoly on religious practice is a kind of religious authoritarianism and that “the state is currently seeking to eliminate Muslim Brotherhood ideas in the mosques because of the political conflict, just as the Brotherhood — when they controlled the ministry — tried to control the largest possible number of mosques to spread their ideology and exploit the mosques for political action.”

Ezzat explained that the ministry's current policy is aimed at controlling Muslim Brotherhood mosques because they cause incitement and mobilize against the authorities. He added that the unified ministry sermons try to stay away from any direct political conflict, “but they indirectly support the positions of the state, such as inviting citizens to participate in the referendum and supporting the road map, despite the citizen’s right to boycott. They also say that the demonstrations are fitna [sectarian strife] and, before scheduled demonstrations, they talk about the importance of stability.”

Bahi told Al-Monitor that the imams are now largely satisfied with the performance of the ministry because the latter is not forcing the sermons into the political conflict. But he expressed fear that the security forces may interfere by imposing specific topics or by excluding certain imams or some who succeeded in the annual contest, “as was the case in [President Hosni] Mubarak’s era,” he said.

Bahi stressed the need for supervision of the religious discourse to protect it from being infiltrated by Shiite or jihadist discourse, whether that is done by the Ministry of Religious Endowments or Al-Azhar.

Abdel Razek asserted to Al-Monitor that “the theme of the sermon is uniform and there is no penalty for noncompliance with the script, which ensures freedom,” pointing out that the issues stem from the religious fundamentals that are uncontroversial to any moderate current and that every imam has the freedom to formulate the text of the sermon as he pleases. He explained that the sermon's theme is posted on the ministry’s website about a week before the sermon, which is enough time to gauge the public’s reactions and their satisfaction on the subject.

Regarding the sermon being biased toward the government’s policies, he asserted that the sermon will not be biased in any way and pointed out that not all of what some see as bias is so. He commented on the example of inviting citizens to participate in the referendum, saying, “Citizens’ voices are important, and respecting their voice is a religious duty. Urging people to participate … is a preaching duty and every imam must emphasize that in the Friday sermon.”

Al-Monitor tried to talk with nongovernmental organization representatives, but those contacted refused to make any statements. A number of leaders from the Salafist Call also refused to comment by claiming that the Salafist Call board of directors is not specialized in mosque affairs. Others did not answer their phones, among them Yasser Berhami, chairman of the Salafist Call.

Ezzat said that most Salafist leaders are refraining from commenting for fear of colliding with the authorities.

Regarding the Muslim Brotherhood, Al-Monitor tried to communicate with Jamal Abdul Sattar and Sheikh Salama Abdel Qawi, the two Muslim Brotherhood figures who used to be in the Ministry of Religious Endowment. But Al-Monitor could not reach them, because they had turned off their phones. Abdul Sattar did not immediately respond to a message send to his Facebook account.