Egypt’s Ministry of Religious Endowments began replacing the names of mosques with political or ideological connotations in a bid to counter what it says is political exploitation. 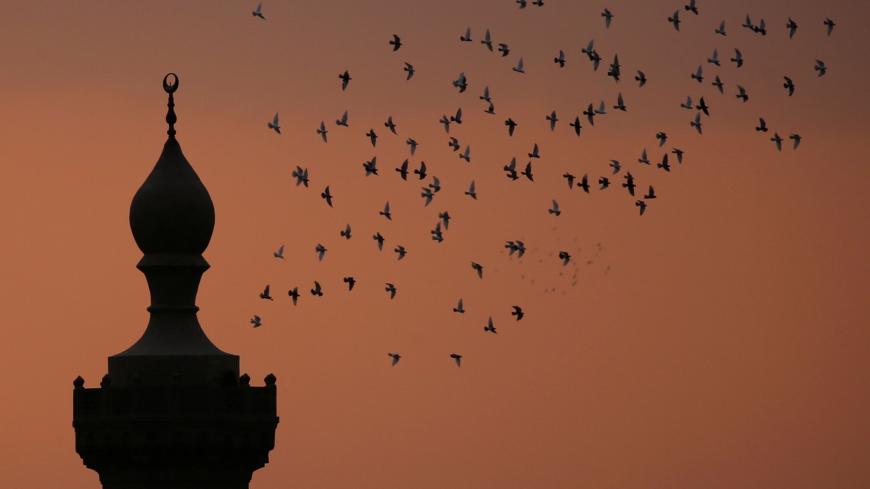 Birds fly during sunset over a minaret of a mosque, Cairo, Nov. 19, 2018. - REUTERS/Amr Abdallah Dalsh

CAIRO — Egyptian Minister of Religious Endowment Mohammed Gomaa issued a ministerial decision on April 1 changing the name of the Hassan al-Banna Mosque in Nasser, Beni Suef governorate, to Al-Huda Mosque. Banna is the founder of the Muslim Brotherhood.

In March, Gomaa had ordered a month-long survey of mosques and zawyas (small local mosques) bearing the names of certain persons, groups or associations with the intention of replacing those names with others devoid of an ideological bent. A well-informed source at Gomaa's ministry who spoke to Al-Monitor on the condition of anonymity said that the survey found more than 100 mosques and zawyas named based on a Muslim Brotherhood association or political faction.

The ministry has issued a series of decisions since 2014 aimed at preventing what it views as the political exploitation of mosques and seeks to subject all mosques — including those supervised by the Muslim Brotherhood, Salafist Call (Al-Da'wa Al-Salafiyya) and other organizations — to its direct supervision. In 2014, a decree issued by the government of Adly Mansour prohibited unlicensed preachers from delivering Friday sermons. It also compelled preachers to abide by a unified Friday sermon on predetermined topics or face punishment.

Among the many other mosques likely to be renamed is Al-Hudaibi Mosque, in the center of Shibin al-Qanater, Qalyubia governorate, named after Hassan al-Hudaibi, the second leader of the Muslim Brotherhood, who was born in that city. Al-Qaradawi Mosque, in Desouq, Kafr al-Sheikh governorate, is named after Yusuf Qaradawi, grand mufti of the Muslim Brotherhood accused of several terrorism-related charges. He fled to Qatar in 2014, when Abdel Fattah al-Sisi was elected president.

Al-Haq Mosque, aka Sheikh Omar Abdul Rahman Mosque, in Nagaa Hammadi, Qena governorate, is named after the spiritual leader of the militant group Gamaa Islamiya, which Egypt has designated a terrorist group. Abdul Rahman, known widely as the Blind Sheikh, died in a US prison in 2017, having been accused of conspiracy in connection with the 1993 attack on the World Trade Center.

The Zomor family has a mosque bearing its name in Giza governorate. Abboud and Tarek al-Zomor, members of Gamaa Islamiya, were implicated in the assassination of Egyptian President Anwar Sadat in 1981. A mosque can be found in Al-Badrashin, Giza governorate, named after the Islambouli family, a member of which, Khaled al-Islambouli, killed Sadat.

There are also several mosques bearing the names of Salafist Call leaders who founded the Nour Party, including Sheikh Mohammed Hussein Yacoub and Sheikh Mohammed Hassan in 6th of October, in Giza, and the mosque of Abu Ishaq al-Hawaini, in Kafr al-Sheikh.

A brief survey of random Egyptians highlighted the divide surrounding the renaming of mosques. For example, in regard to Banna, one person on social media doubted the value of replacing his name, arguing that even if it is removed, people will still know who he is. Meanwhile, a person who supported the decision to remove the name cited a Quranic verse in defense of doing so: “Mosques are for God, so do not invoke anyone with God.”

Jalal, from Nasser, praised the ministry’s decision, telling Al-Monitor, “Several groups, especially the Muslim Brotherhood, have been exploiting mosques. This has misled Egyptian society. Naive Egyptians who believe anything they are told at mosques fall into a trap and turn into extremists. The ministry cannot spread moderation and non-politicized ideas through mosques named after ideological figures. This will reduce the credibility of the ministry’s discourse.”

One man from Alexandria who requested anonymity believes the renaming is political and not actually aimed at depoliticizing mosques. He claimed, “If this was true, the Ministry of Endowments would have also counted mosques named after politicians, including mosques named after Gamal Abdel Nasser and Anwar Sadat and others.”

Al-Monitor contacted a source from the Salafist Call who spoke on the condition of anonymity saying that despite opposing the Muslim Brotherhood, his organization believes it is contrary to Sharia to rename a mosque. He asserted, “This requires the permission of the original owner who donated the mosque building to the Ministry of Endowment or any of his heirs authorized to modify conditions of the endowment, including the name.”

An anonymous source at the ministry disagreed, telling Al-Monitor, “When someone donates a building to be turned into an endowment for Muslims, this endowment shall be placed under the supervision of the Ministry of Endowments, which would be entitled to intervene in its management if it finds that it is being managed against the best interest of Muslims or Egyptians. For example, a given mosque could be used to promote terrorist acts or could be politically exploited.”

Ali al-Qasabi, a sociology professor at South Valley University, told Al-Monitor, “The ministry’s decision should not be challenged as undermining religious freedom or discriminating against religious factions.”

He argued that freedoms are practiced within the scope of the constitution and the public order, stating, “It is the duty of any civil state to implement policies and procedures aimed at protecting the society from the spread of the ideology of religious political factions whose mere existence is contrary to the civil constitution.”

Qasabi further argued, “Egypt is a civil state under the constitution, and therefore no mosque should be named after any political faction or any of its figures. This would be tantamount to political propaganda that exploits religion and the mosque. This is a flagrant and blatant breach of the constitution.”

Reham Salah, co-founder of Almanyon (Arabic for Secularists), told Al-Monitor, “It is a good step by the Ministry of Endowments to stop the political exploitation of mosques by changing politically charged names.”

Salah hopes the ministry’s move will be extended to more theologians. “Scholars like Ibn Taimyyah and Ibn al-Qayeem and others still enjoy immunity from any criticism in Al-Azhar's curriculum,” she said.