After Egypt launched a campaign to unify Friday sermons in mosques across the country, some have questioned the state's real motives behind the move. 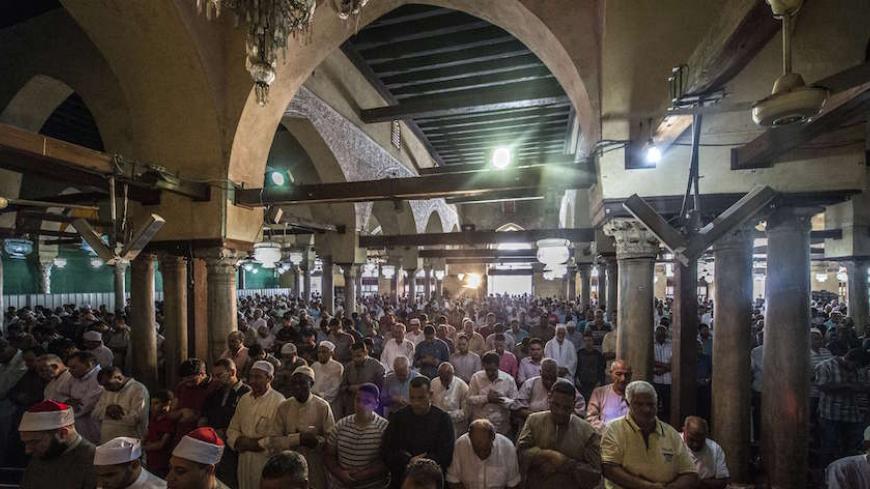 When Egypt’s Ministry of Religious Endowments launched a campaign last week to introduce a unified written Friday sermon, it sparked a lot of controversy. Some questioned whether having a single text read from the pulpits across the country could effectively achieve the ministry’s stated goals, namely preventing those who harbor extremist views from influencing worshippers through the weekly sermon and correctly explaining Islamic concepts through an academic, enlightened and restrained prism.

To push the other imams and preachers to comply with the written sermon, Minister of Religious Endowments Mokhtar Gomaa gave a sermon July 15 at Cairo’s Amr Bin al-As Mosque based on a written text that had previously been posted to the ministry’s website.

However, he stressed in a statement given to the official Egyptian News Agency after the sermon that the preachers in mosques would be free to choose between the written text or a chosen theme.

During a tour of mosques affiliated with the Ministry of Religious Endowments in the governorate of al-Giza, one of the governorates of Greater Cairo, Al-Monitor saw that preachers held to the prescribed topic of "forbidden money" but did not keep to the text released by the ministry. A preacher in one of these mosques, who spoke to Al-Monitor on condition of anonymity, said he had been adhering to the ministry’s chosen topic for the sermon since that guideline was first promulgated in 2014, despite the fact that adhering to a previously decided topic is constricting and prevents him from addressing issues that more directly affect the locals in his neighborhood. He added that while he intends to adhere to the written text or theme in accordance with the ministry’s instructions, he is opposed to this style of preaching.

Ibrahim Abd al-Fattah, a coordinator of the Free Imams Movement, described the unified written speech as a step in the direction of freezing religious discourse in its place and not allowing for renewal. He stressed that the text of the ministry’s sermon would create a barrier separating the preacher from the worshipper and would prevent the latter from receiving the message. “The variety of academic and intellectual levels among worshippers will make it impossible for a single text to succeed in convincing all of them, and will turn the sermon into something more like a news broadcast,” he said.

Abd al-Fattah stressed that while the ministry seeks to exert total control over the mosques, he expects it to fail in controlling ideas being directed at people’s minds. He ascribed that failure to the diverse array of preachers in Egypt, which is replete with those who subscribe to various ideologies, such as the Muslim Brotherhood, the Salafi Call, Ansar al-Sunnah and al-Tabligh wa al-Dawah. According to him, these groups, whose preaching has been severely restricted since 2013, will head off to small prayer spaces and gain new disciples because they will offer a brand of discourse more suited to the audience. This, in his view, will render them stronger and more persuasive among their congregants.

Nuh al-Isawi, the general director of Da’wa Research in the Ministry of Religious Endowments, said in a July 13 interview that after the decision to standardize the subject of the Friday sermon in January 2014, some preachers have not adhered to the weekly topics and have turned in their sermons in directions that reflect their partisan and political affiliations.

Although Isawi conceded that the written sermons were having a negative impact on preachers’ work, he nevertheless attributed the ministry’s desire to apply this standardization as soon as possible to Egyptian society’s need for what he described as control of religious discourse, support for mechanisms delivering a correct understanding of Islam and a repudiation of violence and extremism.

Isawi said that the Gulf states are all adopting a standardized written sermon and there are Egyptian imams who work in those states who are seemingly untroubled by this approach. He also noted that the preachers in Islam’s two holiest mosques in Mecca and Medina adhere to a general written sermon for the sake of public interest.

Still, Abd al-Fattah said preaching activity in Egypt cannot be compared to what is taking place in the Gulf, and particularly in Saudi Arabia. He stressed that Egyptian society is characterized by a great deal of pluralism, which portends the failure of this approach, regardless of whether it proves successful in the Gulf.

Yet Gabir Tayyi’, the head of the Religious Section of the Ministry of Religious Endowments, told Al-Monitor, “You cannot renew religious discourse before first restraining it.” In his view, the written sermon will help to restrain what is said from the pulpit and prevent a poor understanding of religious matters, as well as confront religious rulings from being employed outside their proper contexts.

Tayyi’ defended the written sermon against criticisms directed against it that a standard written text would not be suitable for a pluralistic society such as Egypt, whose residents live in urban, rural and Bedouin societies, each of which has a unique culture. “The sermon will be written in an Arabic that everyone understands, and the selection of sermon topics will be conducted to find common denominators between all society’s individuals,” he said.

Tayyi’ rejected the view of the written sermon as a means to tighten the noose around preachers who do not belong to Al-Azhar’s circles or prevent them from rising to the pulpit. He stressed that the ministry already prevents any non-Azhari preachers from giving a Friday sermon.

He admitted that some imams within the ministry harbor fears about this decision, noting these imams are worried that congregants will take a dim view of them when they read from a paper and are even more afraid of security directives contained in the written text. “We seek to ease these doubts. The Ministry of the Religious Endowments’ sermon last Friday was written [and distributed] and we did not look askance at it. We always reiterate that imams have no relationship to the security forces concerning the written sermon. On the contrary, these sermons are written by the elite of Islamic religious scholars.”

Nasir Radwan, a leader in the Salafi Da’wa in the governorate of al-Beheira in the Egyptian Delta, said that the prescribed written Friday sermon would not touch on all of society’s important issues. He stressed that the preacher and the worshippers in the same mosque are united by shared geographic location and, moreover, both are preoccupied with the same issues. However, in his words, the unified speech would negate any positive influence of shared location and circumstance that otherwise connects the preacher to the worshippers.

"The mosque completes the educational role begun by the family and educational institutions,” according to Radwan. He said that when the preacher deals with issues faced by his society, it positively affects his ability to discharge the educational role through the Friday sermon. He also warned that worshippers might simply depart the mosque before listening to a written sermon that they can easily obtain from the Ministry of Religious Endowments’ website.

Radwan also warned that a written text of the sermon could curb the desire of preachers to research and develop their own sources of knowledge. Radwan said the Friday sermon acts as a sort of weekly training for the preacher in cultivating his own tools and techniques for reaching and swaying worshippers.

Radwan stressed that this step reveals the desire of the ministry to create a single generic type for all preachers, and it constitutes a form of constriction not only on non-Azhari preachers but even on the Azharis themselves. He stressed that generic sermons would deprive religious discourse of its force, its respect for difference and its acceptance of the other, which Islam imbues in its followers.