Egypt keeps Salafist imams out of pulpits ahead of elections

After cracking down on the Muslim Brotherhood, the Egyptian regime is now going after Salafists by restricting access to mosque pulpits. 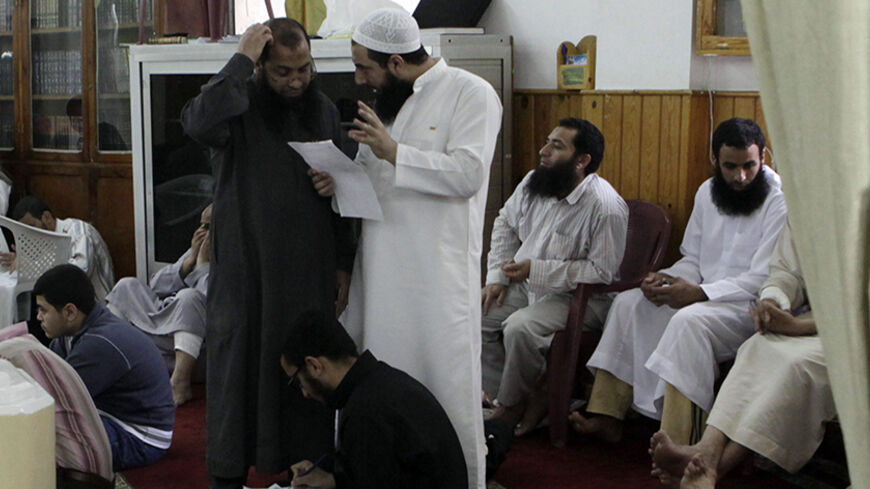 CAIRO — The conflict between the Egyptian government and Islamic political forces continues over the issue of religious sermons, particularly the Friday sermons. This crisis remains one of the thorniest issues, and it has always been a tool for political Islam to garner popularity. The government's decision to ban access to the mosque's pulpits without official authorization from the Ministry of Religious Endowments has renewed the conflict between the Salafists and the Egyptian government. Salafist groups such as the Salafist Call, an Egyptian group seeking to spread Salafi ideology in Islam, accused the ministry of excluding them, as the tests to grant these authorizations include questions in Islamic doctrine to ensure the Salafists’ failure.

Over the last two months, the Egyptian Ministry of Religious Endowments held two such exams. Many of the questions used are known for being disputed by Salafists, most notably those about the ruling of Islam regarding the military salute, standing during the national anthem, women in the judiciary, the concept of the caliphate, the reconstruction of places of worship for non-Muslims, bank profits, women wearing the veil and the establishment of museums for ancient Egyptian and Pharaonic artifacts. Salafists have well-known and radical opinions about all these issues, as they believe that Islam forbids such things.

Sheikh Salah Abdul Mabood, a member of the Salafist Call’s board of directors, told Al-Monitor that including these questions is intended to fail Salafist applicants and prevent them from accessing the pulpits.

It is known that Salafists in Egypt have religious views that are different from those of the Ministry of Religious Endowments and Al-Azhar. For Salafists, for instance, it is forbidden to stand to salute the Egyptian flag or give the military salute, both being considered admiration of idols.

Salafists hold that women holding the post of judge runs contrary to Sharia. They also consider growing a beard an obligation for Muslim men, and that women wearing the niqab is obligatory, not just tradition. They also ban bank loans. Dar al-Ifta al-Misriyyah, Al-Azhar and the Ministry of Religious Endowments all agree that these conventions are not obligatory.

Abdul Mabood emphasized that the Salafist Call objects to the Ministry of Religious Endowments' control over the testing, as the endowment is an administrative body rather than a religious one, such as Al-Azhar. “All Salafist preachers studied Sharia at Al-Azhar, and are well informed about all Islamic doctrines, such as the Hanbali and Shafi'i schools and others," he said. "They cannot force us to answer the questions according to their views. They do not mind alcohol in touristic places, while they put trick questions in the tests and fail us if our answers differ from their views.”

The crisis between the Salafists and the Egyptian Ministry of Religious Endowments escalated when 600 Salafist imams took the ministry’s test and only 18 passed. Their disqualification prompted the Salafist Call to demand that the presidency resolve the crisis and support Salafist imams, who supported the road map on June 30, 2013.

Yasser Al-Borhamy, vice president of the Salafist Call, said in an official statement: “We believe that we were subjected to a clear injustice, because we supported the road map, the constitution and the presidential elections. We have done what was required from us. How are we considered equal to those who want to destroy the state? The presidency is supposed to be familiar with the matter.”

In a phone interview with Al-Monitor, Sheikh Salem Abdul Jalil, the former deputy minister of Religious Endowments, said the crisis is mostly political, as parliamentary elections are approaching in Egypt. The move is intended to ensure that Salafist clerics are kept away from the pulpits where they win popularity. “Salafist groups have always been a problem for the government, just like the Muslim Brotherhood,” he added.

Abdul Jalil further explained, “When I was the deputy minister of religious endowments, we suffered from the practices of the Salafist Call on the mosque pulpits, practices that were not only politically but also ideologically oriented.”

He added that the various religious doctrines have different teachings on religious issues. Some scholars hold that shaving the beard is forbidden, while other Islamic doctrines find otherwise. “The preachers in mosques have to explain to worshipers all views, and should not impose a particular view, as Salafists do,” he said.

Abdul Jalil also criticized the Ministry of Religious Endowments, saying that the body criticizes Salafism while acting in much the same way. “The ministry requires Salafists to answer according to their juristic views in the tests, for authorization to access pulpits, while it would have been better that applicants take six months of training," he said. "Then, they would be followed up on inside mosques to ensure that they have knowledge about the various explanations of religious issues and that they are explaining the diverse issues to the people.

“Unfortunately, both parties have a unilateral message. For instance, the Ministry of Religious Endowments wants the preachers to tell the people that growing a beard is not obligatory, while Salafists want to tell people that having a beard is obligatory. Thus, there are two parties — the first desperately wants to impose its views, and the other is a government party that has no vision and ideology.”

Salafist leaders did not expect to be treated the same way the Egyptian regime has dealt with those affiliated with the Muslim Brotherhood. They never thought they would be prevented from doing their job — to gather people around them by accessing the mosques’ pulpits. After Salafists turned against their former Islamist allies and joined civil parties and the Egyptian army on June 30, the political reconciliation between the Egyptian regime and Salafism did not last long, as now the government is working to separate religion and politics.