The escalating conflict between Muqtada al-Sadr and Nouri al-Maliki has raised further barriers to the formation of a new government. 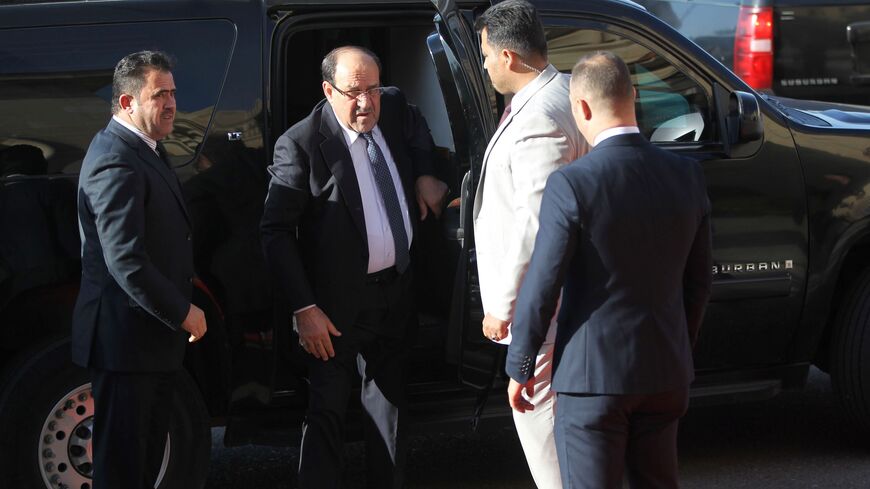 Secretary-General of the Islamic Dawa Party Nouri al-Maliki (C) arrives at a political meeting at the presidential palace in Baghdad on Feb. 27, 2019. - AHMAD AL-RUBAYE/AFP via Getty Images

Muqtada al-Sadr has demanded that Nouri al-Maliki quit politics following the leak of an audiotape in which Maliki violently threatened Sadr and almost all other Iraqi political parties. Sadr also asked the former prime minister's political allies within the Coordination Framework and Maliki's tribe, Bani Malik, to denounce his statements.

“The threat (of killing me) comes from the Dawa Party, which is affiliated with the Sadr family, and from their leader, Maliki,” Sadr tweeted, referring to the tape in which Maliki threatened to take up arms against him.

“The next stage is fighting, and that Sadr wants blood as he speaks of it, and I told Prime Minister Mustafa al-Kadhimi that I do not trust the army and the police, and everyone will defend himself, and I will defend myself while I work for them and we have tanks, armored vehicles and drones,” Maliki said on the tape.

Although Maliki said the tape was fake, it was shared widely and many specialists confirmed its authenticity.

The leak includes the statement “Iraq is going toward a fierce war if Muqtada’s project … does not fail,” and if a war happens, Bani Malik will fight against his enemies. The tape also includes strong attacks against the Sunnis and the Kurds and even the religious seminary of Najaf because of their differences with Maliki in the past.

In his tweet, Sadr asked Maliki to hand himself over to the judiciary in the hope of being forgiven.

Following Sadr's tweet, both Maliki's party and tribe issued statements, creating distance between themselves and the statements mentioned in the tape.

“We will not enter into a conflict with any party,” the Dawa Party announced in a statement on July 19. “We will not be taken into a blind strife among Iraqi people.”

The highest sheikh of Bani Malik, Abd al-Salam Muhsin Armesh al-Maliki, also announced that his tribe will not enter any conflict among political groups and will distance itself from the current conflict.

This all comes while the Coordination Framework attempts to form the new government in Iraq. Maliki was one of the main candidates, but it would be very difficult now for him to be nominated, especially since some parts of the statements in the tape can be prosecuted based on Iraqi law.

The parliament had scheduled a session to select a president on July 18, but it was canceled due to the controversy over the leak.

Although Sadr had withdrawn from Iraqi parliament last month to break the political deadlock, his social and political influence still means that no government against him can be formed.

Last Friday, Sadr set conditions for forming the new government, including ending the militia presence and distancing the Popular Mobilization Units from politics. This clearly shows that Sadr is still willing to play a central role in Iraqi politics, using his widespread social base.

Under these circumstances, it seems unlikely for now that the Coordination Framework can form a government. The only solution seems to be an early election, which requires at least a year of preparation in Iraq.

The caretaker government will face great challenges during this time to manage the country without a budget and work on amending the electoral law demanded by the political parties and also by a ruling of the federal court.