In the decade-old Turkish diaspora, thousands of Syrians have started businesses that fill niches in Turkey and open up new export markets — but economic and political challenges are rising. 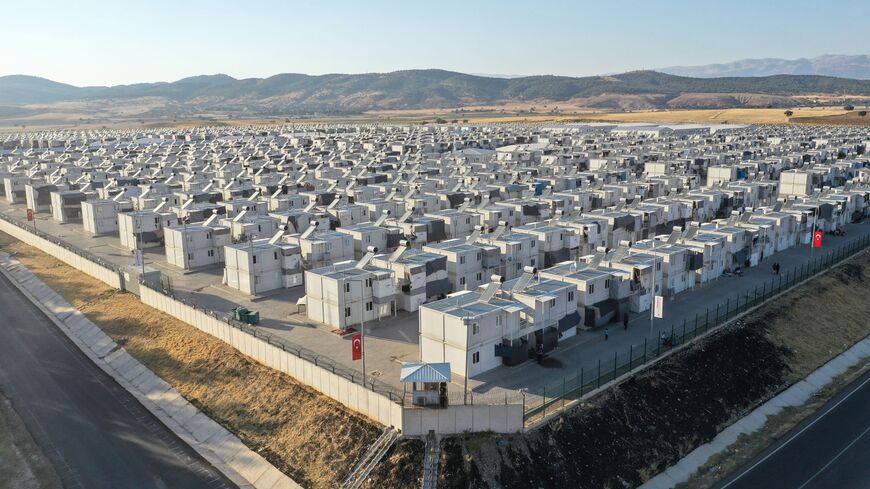 A general view of the Kahramanmaras refugee camp which is hosting 11,500 people from northern Syria on Sept. 19, 2019, in Kahramanmaras, Turkey. - Burak Kara/Getty Images

When Saad Al-Nassife came to southern Turkey from Syria in 2012, he was barely getting by in construction. Facing Turkish competition, he found a niche through some other laborers' connection to Aleppo’s long tradition of Syrian stonemasonry. They founded SMM Stoneworks to fill a gap in Turkey. Knowledge in this traditional sector enabled SMM to weather the current socioeconomic storm other Syrian companies now face in Turkey.

Syrians have established between 11,000 and 14,000 businesses in Turkey since the Syrian uprising. Factoring in the black market, the number could be easily double or triple that. They have succeeded in exports, connecting their clients and social capital to Turkey and helping expand the domestic supply chain. Syrian-owned companies also cater locally to the Syrian diaspora and sectors that require specific expertise or that are labor-intensive, including stonemasonry, shoe manufacturing, textiles, carpentry and more.

But Syrian businesses across the board are facing a suite of challenges in Turkey today — from the lingering COVID-19 pandemic to economics and now politics.

Aleppan stone figuratively and literally reflects the history of this great merchant city. Aleppo’s ancient citadel sits atop an outcropping of natural limestone, and the Masjid al-Nuqtah contains stone believed to be stained with the blood of Husayn, the grandson of the prophet Mohammad. And its nickname, Aleppo al Shabaa, or Aleppo the White, refers to the city’s bright appearance.

In 2016, SMM surpassed its goal to earn a million Turkish liras as it employed 126 stone masons to restore and replace stones in mosques and old houses across southern Turkey, as well as to construct new restaurants and villas.

These positive developments have not been lost on local government officials. Onder Yalcin, the head of Gaziantep Municipality’s Migration, said, “Syrian migrants addressed labor shortages, in stone carving and more. The appearance of the city has changed for the better.” He cited how the renovations benefit Gaziantep’s growing tourism sector as well.

SMM believed that 2020 would be their best year yet, but then the COVID-19 pandemic hit.  And the pressures on Syrian businessmen have only increased since then due to Turkey’s current economic crisis. A survey by Building Markets from last month found that the majority of Syrian companies in Turkey believe the recent economic crisis has had a stronger negative impact than the pandemic. Syrian businesses in the domestic market have been hit hard, but exporters have become more competitive. The current environment has signaled to many Syrian companies, including SMM, to shift their focus to exports in exchange for hard currency.

The latest challenge for Syrian businessmen in Turkey has been political. Turkish politicians have seized on growing anti-refugee sentiment by blaming the economic disarray on Syrians. The amount of Turkish citizens who say Syrians need to definitely be sent back has quadrupled in three years and grown further in the current financial downturn. Last month, Turkish President Recep Tayyip Erdogan stated he intends to resettle 1 million Syrians in “safe zones” back in Syria. There have also been calls for a new Turkish military offensive into northern Syria — the same areas these Syrians would presumably be resettled in.

Whether this mass deportation will happen, the threat alone is affecting Syrian businesses. Syrian businessmen working in textiles told Al-Monitor on condition of anonymity that it has become more challenging in recent months to obtain work permits or to ease mobility restrictions for Syrian nationals. Access to finance, already a key challenge for Syrian businesses, will only become more difficult, many fear.

Tammam Al Baroudi, a food supplier and the executive vice president of the Syrian Economic Forum, based in Gaziantep, is not fazed, however. “This talk is only for the elections. No one will make us leave. In Gaziantep, there are 500,000 Syrians who rent more than 100,000 houses and 5,000 offices. What would happen to the local economy if we leave?”

Similarly, Selim Koru, an analyst at the Ankara-based think tank TEPAV, told Al-Monitor, “I understand that they're concerned, and they should be, because their lives can be made more difficult, but I think they're in the country to stay in the long run. So their economy is only going to grow.”

Al Baroudi went on, “I know of ten Syrian companies in Gaziantep who export more than $10 million in Turkish products each year alone. Syrians have brought Turkey new customers—from Algeria to Saudi Arabia,” citing Syrian businessmen’s preexisting relations as well as their knowledge of the language and business culture in the Arab world. Al Baroudi concluded ecstatically, “We export everything. Everything! You don’t believe it.”

This month, in Istanbul’s glitzy new Galataport mall, SMM constructed the stone columns for a public exhibit on Gobeklitepe, one of Turkey’s most important archeological sites. “Can you believe this?” Al-Nassife told Al-Monitor. “Only a few years ago we used to sleep on-site during a job, and now we have all this,” pointing to the factory and his employees meticulously carving outside.