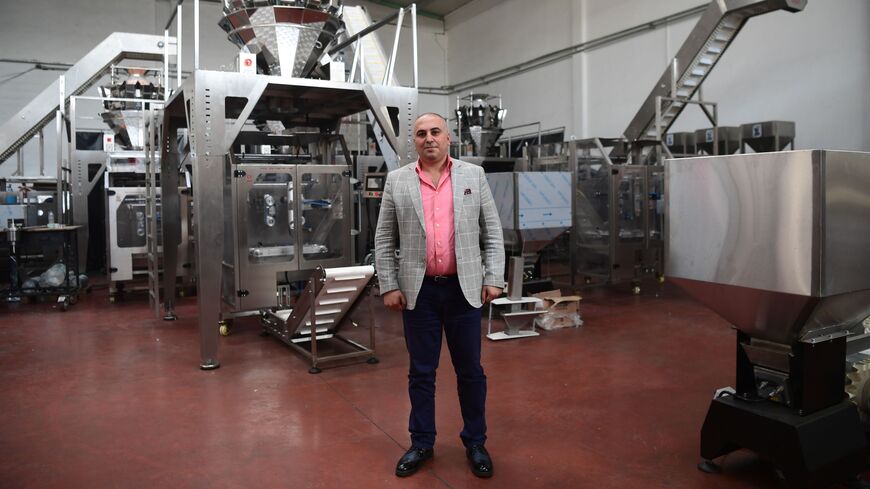 Amer Hadri, founder of the Zirve food machinery maker, stands in Gaziantep in southwestern Turkey on May 2, 2018. Hundreds of Syrian businesses are thriving in Gaziantep, home to around half a million Syrians who fled the civil war south of the border, in a boost both for the displaced community and their host country. - OZAN KOSE/AFP via Getty Images

Syrian investors pumped approximately 58.7 million Turkish liras (about $7 million) into 124 companies during the first quarter of this year, according to statistics published May 1 by the Union of Chambers and Commodity Exchanges of Turkey.

While this was only a fraction of the more than 3,200 foreign companies established in Turkey in cooperation with local Turkish partners in the first quarter, it still shows the value of Syrian investment in the country.

The large number of Syrian refugees in Turkey — it was estimated at 3.6 million last year — has helped lead to a 5% overall increase in the number of companies registered in Turkey.

As of December 2019, the number of Syrian-owned companies in Turkey was about 13,880, accounting for 29% of the foreign-owned companies in the country, with a capital of about 4 billion Turkish liras ($480 million), the Turkish trade minister said in January 2020. Most of these companies are active in construction, wholesale trade to and from abroad, food products, clothing and the rental of real estate. The total capital of foreign companies in Turkey is estimated at 151 billion Turkish liras ($18.2 billion), the minister added.

In September 2018, the Economic Policy Research Foundation of Turkey released a report based on information obtained from several Turkish chambers of commerce and industry indicating the number of companies established by Syrians in Turkey exceeded 10,000; 40% were jointly owned by Syrians and people of other nationalities and 60% were owned solely by Syrians.

The study said the companies have activities in various economic sectors and provide job opportunities for about 44,000 Syrian workers in Turkey.

Some 22% of these companies are based in the southern and southeastern provinces along the Syrian border where many Syrians fled following the start of Syria's civil war a decade ago. Around 55.4% mainly export their products. The Syrians' contribution to the Turkish economy was estimated at more than $500 million in addition to the job opportunities they provide to both Turkish and Syrian workers, according to the foundation.

Tamam al-Baroudi, director of the Syrian Economic Forum, a nongovernmental organization based in Gaziantep that provides economic studies to Syrians, told Al-Monitor, “We can’t assume that the nearly 14,000 companies mentioned by the Turkish trade minister are still active. In the past few years, many Syrians have established companies in Turkey to obtain work permits and then Turkish nationality, which is exceptionally granted to Syrians who own companies or have work permits.”

He added, “The big companies, however, established in partnership with Turks, had a great role in benefiting the Turkish economy since the government collected taxes from these companies.”

Baroudi also said, “Some Syrian [investors] are not familiar with the licensing procedures [in Turkey], others find it a difficult task given the language barrier. Some small business owners cannot afford to pay for the license. After our project ended in 2018 [due to the expiration of the funding], other organizations such as Sened [another nongovernmental organization based in Gaziantep to support Syrians in the city], continued working to help Syrians get licenses for their companies.”

Baroudi said, “Licensed Syrian companies are divided into several types. Some are private companies such as restaurants or small factories, which are considered small companies. Other companies are the limited companies, which include activities such as import and export, production, as well as large factories and plants, which well contribute to the Turkish economy.”

Galal Bakkar, a Turk of Syrian origin and owner of the Eco Link Group in Turkey, a private company that provides consultancy and economic plans, told Al-Monitor, “Syrians in Turkey have transformed from being refugees to being a small community within Turkish society. Not all Syrians are classified as refugees now. Some of them are businessmen and capital owners. Others have acquired Turkish nationality. The number of Syrian companies in Turkey indicates that Syrians have become a productive social category. Turkey has benefited from these companies as they were its gateway to export Turkish products to northwestern Syria, where goods are now mostly Turkish. This is not to mention marketing Turkish products to the Syrian community in Turkey.”

He added, “The economic relations between Syrian and Turkey, especially in the Turkish south bordering Syria, are not something new, as this practice has been around for decades, even before the Syrian displacement to Turkey upon the outbreak of the Syrian revolution. According to information from Turkish officials, the volume of Syrian investments in Turkey before 2011 amounted to about $500 million, but these were indirect investments. This means that Syrians who were in Syria [before the war] invested in projects inside Turkey through partnership contracts with Turks, and received a certain percentage of profits. Today, Syrian investment in Turkey is direct, as Syrians are funding and operating their projects without any partnership with another party.”

Metin Turan, a Turkish journalist at the TRT channel and the president of the Arab Association in Turkey, told Al-Monitor, “The Turkish economy mainly relies on taxes, which Syrian companies working in different economic, cultural and commercial sectors pay. This is not to mention the quality of their products and the fact that a fair proportion of the Turkish population likes to deal with Syrian companies.”

He added, “Also, Turkish companies seek to enter into partnership with Syrians in order to market their goods in the Arab world. Syrian companies have achieved great profits for their Turkish counterparts through this strategy. Syrians also contributed to promoting and marketing Turkish television products such as movies and series in the Arab world. One can say that the Syrian community is a productive one in Turkey. Had it not been for the language barrier, I believe many more partnerships would have been accomplished between the two sides, which would be beneficial to everyone.”

Baroudi said, “We have worked in the forum over the past years on several projects to help Syrians in Turkey, especially in the city of Gaziantep in the south, mainly to secure licenses for their projects and establish commercial companies.”