Businesses boom as Syrians put down roots in Turkey

Ankara has acknowledged the prospect of at least 1 million Syrian refugees never leaving, as many set up companies, buy property and open schools. 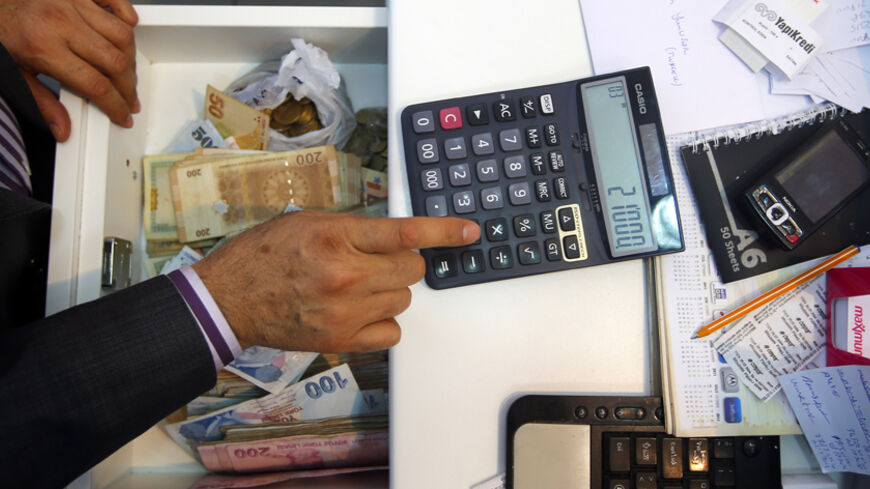 A money changer calculates the exchange rate of Turkish lira to Syrian pounds at his office in the southern Turkish town of Reyhanli, Nov. 29, 2012. - REUTERS/Laszlo Balogh

MERSIN, Turkey — In a bustling office on a palm-lined street along the Mediterranean shore, Ahmet Ammar Restom is busy answering phones, rifling through papers and greeting clients. He looks like any another businessman, but in the eyes of the Turkish authorities he is a refugee — and he doesn’t like it.

“When I go to government offices to sort out problems, I’m treated as a refugee. But I’m a businessman,” the Aleppan merchant told Al-Monitor, proudly sharing the documentation for his latest shipment of cooking oil exports. “I don’t take any aid [from the Turkish state]. On the contrary, I am aiding the state — I pay taxes.”

Restom is among a growing number of Syrians who have started businesses in Turkey, many with little intention to return home one day. After registering 489 companies in 2013, Syrians set up 1,004 companies in the first 10 months of 2014, becoming the largest group of new foreign entrepreneurs in the country, according to Turkey’s Union of Chambers and Commodity Exchanges. In addition to the wealthier, larger-scale businessmen who register their companies, hundreds of Syrians have opened small shops and restaurants, often under the table.

These industrious newcomers certainly offer financial relief for Turkey, where the bill for providing for nearly 2 million refugees has swelled to $5 billion, according to Prime Minister Ahmet Davutoglu. Official statistics show that only about 221,500 Syrians remain in the 22 camps in the border regions. Scattered across the country, the rest struggle to earn their bread and often live in squalid conditions, and Syrian beggars are now a fixture in urban centers.

Under Turkish law, the Syrians are not technically refugees but “guests” under “temporary protection.” Yet, with Syria's civil strife dragging on, Ankara has acknowledged that the “guests” are here to stay. The Syrians are unlikely to return home “for a long time to come,” Deputy Prime Minister Numan Kurtulmus said Nov. 25, calling for “permanent policies” to deal with the problem. Despite widespread public discontent, Ankara is currently drafting legal measures to grant Syrians work permits.

According to Mazhar Bagli, deputy chair of the ruling Justice and Development Party, at least 1 million Syrians are expected to stay in Turkey even after the war ends.

This prospect is clear in the Mediterranean city of Mersin, where at least 45,000 mostly well-off Syrians are slowly putting down roots. Shops with Arabic signs, luxury cars with Syrian plates and private schools for Syrian children are now common across the city.

“Even if the war ends, Syria will not recover for 25 years. Both Turkey and Syria are my motherlands now. … We want to have equal rights with the Turks. We want Turkish citizenship,” said Restom, voicing a common expectation among Syrians.

Mersin — some 300 kilometers (185 miles) from the Syrian border — has lured Syrians with favorable business and living conditions. The pretty coastal city, home to Turkey’s largest commercial port, is a gateway for trade with the Middle East and offers abundant accommodation, including summer vacation homes, many of which are now rented by Syrians. It has a sizable population of ethnic Arabs who serve as a social link between the locals and the newcomers.

Citing sources in the banking industry, Ali Altinel of the Syria Trade Office, a consultancy in Mersin, estimates that some $10 billion of Syrian money has flowed into Turkey’s southern provinces in the past three years, and most of it is now invested in business.

About a fourth of the Syrian companies set up in Turkey this year are based in Mersin. After a sharp decline in bilateral trade due to the war, exports to Syria from Mersin alone shot up by 331% in the first seven months of this year, with the Syrians exporting mostly flour, cereals and cooking oil, according to the local trade chamber.

For some Syrian merchants, starting a business in Mersin meant little more than relocation. They maintain their long-established trade links with Middle Eastern countries while also exporting goods to their war-ravaged country.

One of them, Zakaria Darwish, said he has transferred 20% of his assets to Mersin and was working to move the rest. He has brought along his employees from Aleppo, has already married a daughter off to a Turk, put his younger children in a Syrian school in Mersin and plans to buy the home he currently rents.

“Our future is here. Life is better and people have more freedom here. The Syrians who fled to Turkey are the luckiest ones,” Darwish told Al-Monitor, stressing that difficulties stemming from the Turkish bureaucracy and Syrians' ambiguous legal status have been his only problems.

In a neighborhood not far from Mersin’s long seaside promenade, a whole street is lined with Syrian establishments: two barber shops, several groceries, a restaurant, a cafe and two elegant buildings housing a private school and a community center. The groceries sell Syrian foods, including the traditional bread, supplied by a nearby Syrian bakery. Ads in Arabic advertise a wide range of products and services — from shisha charcoal to preparatory courses for Syrians who wish to sit for Turkish university entrance exams.

Syrian students, like 21-year-old Meral from Manbij, a town near Aleppo now under Islamic State (IS) control, are already enrolled in the local university. “I plan to stay in Turkey,” she said. “What would I do in Syria, with [President Bashar al-] Assad in Aleppo and IS in Manbij?”

Syrians have opened 10 schools in Mersin, said Ahmed al-Muhammad, an administrative officer for one of them. While most cater to the children of the well-to-do, his makeshift school — 11 tiny classrooms in a former warehouse — provides education to 800 students in the city's outskirts, where impoverished Syrian families live.

The school, whose 30 teachers are themselves refugees, receives no aid from the Turkish state and barely survives with donations from a Syrian association in France, Muhammad told Al-Monitor. He added it recently received money from the Western-backed Syrian interim government, based in the Turkish border city of Gaziantep, to buy new textbooks printed in Turkey and purged of Baathist propaganda.

While Syrians are building new lives in Mersin, their Turkish neighbors have mixed feelings. Some have embraced the newcomers and are readily helping them. Others grumble about rising rents, unregistered trade and job competition.

Altinel, himself a businessman, complained of illegal Syrian workers, “unfair business competition,” price undercutting and fraud. He said, “They are getting in the way of our businesspeople and harming them. I’m rather pessimistic.”

In a survey released in November, Ankara’s Hacettepe University warned that Turkish acceptance of the refugees had reached its limits, and hostility might explode. The survey found that more than 70% of Turks see the Syrians as an economic burden and say they should remain confined to refugee camps. About 47% are opposed to work permits for Syrians and almost 50% are averse to having Syrian neighbors. The study concluded: “Turkish society has displayed a high level of social acceptance for the Syrians and tried to support them so far, but unless the process is properly managed, xenophobia is likely to spread fast, with some groups propagating hatred and engaging in attacks.”

Imad Arap contributed to this report as an interpreter.