While Europe panics over 224,000 refugees, displaced Syrians have reached 330,000 in Istanbul alone. 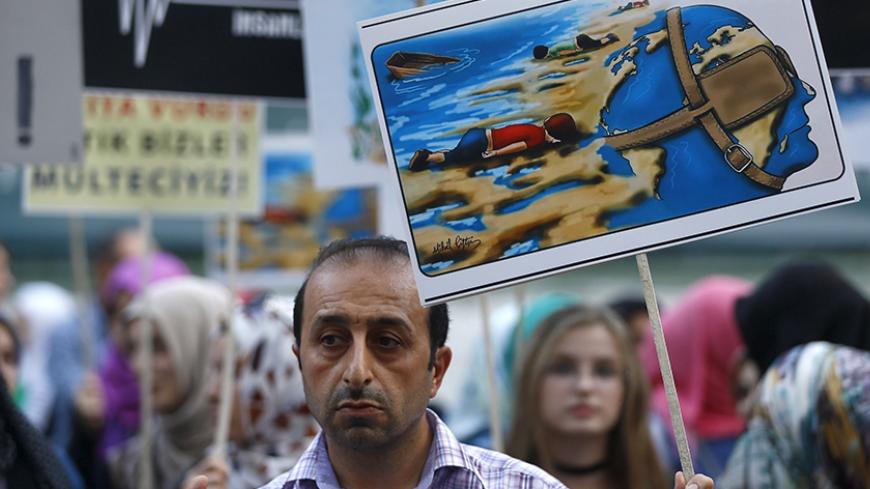 A man holds a poster with a drawing depicting drowned Syrian toddlers during a demonstration for refugee rights in Istanbul, Turkey, Sept. 3, 2015. - REUTERS/Osman Orsal

According to information released by the UN High Commissioner for Refugees, the number of refugees heading to Europe this year has reached 224,000. Most of them are Syrians.

The heartbreaking photos of the lifeless body of 3-year old Syrian toddler Aylan on Turkey’s coast inspired feelings of compassion in the European public and the various governments. Nevertheless, with the exception of Germany, many are still grumbling over receiving small numbers of refugees.

According to Association for Solidarity with Refugees, the number of Syrians in Turkey has exceeded 2 million. Of them, 260,000 live in tents and prefabricated cities.

The Interior Ministry says the Syrians have dispersed to 72 of 81 Turkish provinces. According to last year’s numbers, Istanbul alone had 330,000 Syrians, more refugees than the whole of Europe. Istanbul has become the new “capital” for Syrians. Gaziantep hosts the second largest group with 220,000, followed by Hatay with 190,000.

But the events of last year have increased these numbers. According to Sabah columnist Yavuz Donat, who tours the country nonstop to report on local conditions, the governor of Hatay told him there are now 320,000 Syrians in the city.

Syrians do everything possible to survive. Donat reported that in 2014, 11 million liters (2.9 million gallons) of illegal fuel was confiscated in Hatay, but at least four times as much was finding its way to the market. He wrote, “The man comes to Turkey, buys a horizontal driller, takes it to Syria. He lays the pipe underground across the border. Then a tanker comes to his side and pumps it to a tanker waiting on the Turkish side.” At least 20 such operators were arrested and the problem was resolved.

How do the Syrians in Istanbul survive?

Last year, Kanal D television aired a program showing the struggle of refugee children in the Eminonu district. Barefoot little children and ragged women were shown in their daily efforts to collect 50 Turkish lira ($16) to pay for their hotels. Children were seen running away in panic at the news the police were coming. Their joy at finding cucumbers and salad greens in a garbage pail was truly heartbreaking.

There are artists, writers and educators among the Syrian refugees. Their drama is covered in a new documentary, “Selam,” which aims to make them visible and help them adapt. Each chapter of the 12-segment documentary will cover the life of one Syrian artist. The first 18-minute segment is already on YouTube.

Not all Syrians are as fortunate. There is severe exploitation and frequent reports of Syrian women being forced into prostitution in many cities, especially in Istanbul.

The poor refugees suffer the most. Better-heeled Syrians are setting up companies in all parts of Turkey. In the first half of 2015, of 2,395 companies set up with foreign capital in the country, 750 belonged to Syrians.

Syrian businesses generally operate in the fields of restaurants, construction, textiles, shoemaking, real estate, travel agencies, transportation and foodstuffs. They largely employ Syrians. Many Syrians who work for Turkish companies are made to work in fields and on construction sites at low wages and without insurance. There is no occupational safety for them in these dangerous positions. The most recent tragedy happened in Hatay on Sept. 11, when a small truck crammed with 51 Syrian construction workers turned over, killing seven and injuring 38 of them.

For those without jobs, life is worse than miserable. In Istanbul alone, 3,000 of them live by begging.

Gaziantep's Industrialists and Businessmen Association head Cuma Cekici told Sabah, “Unfortunately, there are doctors and teachers among the Syrians who come to us for any kind of work, even as porters.”

Last year, the Middle Eastern Strategic Research Center and the Economic and Social Studies Foundation of Turkey carried out an exhaustive study in the areas where Syrians live and listed the problems they face in their integration process. They found:

On June 20, World Refugee Day, the Association for Solidarity with Refugees listed the problems faced by Syrian refugees in Turkey:

There are frequent clashes between the local population and Syrian refugees in Istanbul, Gaziantep, Hatay, Sanliurfa and Kahramanmaras. With 6 million Turks already unemployed, Syrians are forced to work cheap. When Turks lose their jobs to the refugees, fights break out.

Many Syrians opt to live on the fringes of cities together with their compatriots. While this offers them some level of protection and solidarity, it makes their integration much more difficult and also makes their area a target.

Last year, there was an attack against Syrian-owned businesses in Istanbul’s Ikitelli district. This year, in an altercation made to look like fighting among children, Syrian-owned shops were stoned, even shot at. Two restaurants, a barber shop and a house were set on fire in Basaksehir. There was no loss of life only because the business establishments and house were empty. A group of Syrians left the district after the attack. What the local headman of the district said summed up the Syrian crisis in Turkey:

“We had about 10,000 Syrians move into our neighborhood over the past three years. Our population rose to 50,000 and rents went up from 400 to 1,000 lira [$327]. In textile workshops, Syrians are employed at half the legal wages. Now we have an unemployment problem for Turks with a surge of narcotic use and burglaries. It can only get much worse here.”