Saudis side with Egypt on Nile dam

Saudi Arabia has explicitly and officially voiced its support for Egypt in the Grand Ethiopian Renaissance Dam crisis. 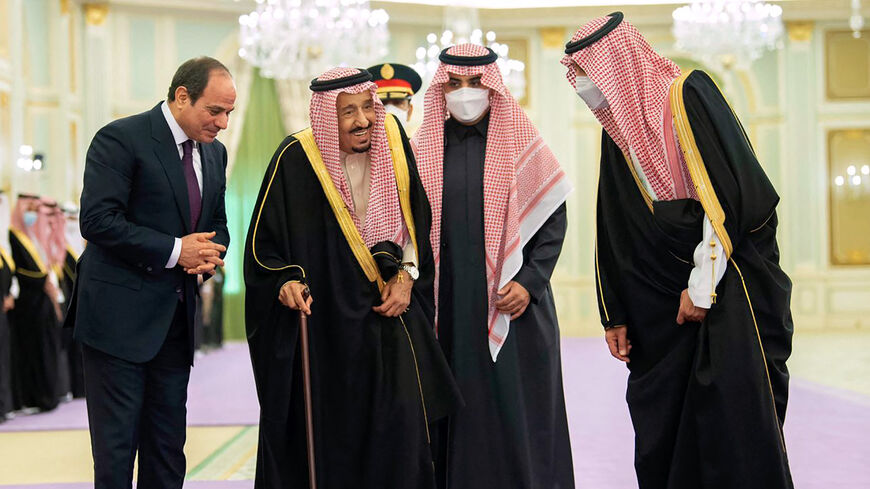 The Kingdom of Saudi Arabia officially declared its support for Egypt’s position in the Grand Ethiopian Renaissance Dam (GERD) crisis, backing all measures taken by Cairo to protect its national security regarding this crisis.

Riyadh has strong economic influence in Addis Ababa and highly values Egypt’s cooperation on many issues, including the confrontation with Iran.

The Saudi position was voiced in a joint statement following a meeting between Egyptian President Abdel Fattah al-Sisi and Saudi Crown Prince Mohammed bin Salman during his visit to Cairo on June 21.

The statement said, “With regard to the Renaissance Dam issue, the Saudi side affirmed its full support for Egypt’s water security being integral to the Arab water security and urged Ethiopia not to take any unilateral measures regarding the filling and operation of the Ethiopian Renaissance Dam.”

It added that Saudi Arabia “stressed the importance of negotiating with good intention with Egypt and Sudan to reach a legally binding agreement in this regard, in implementation of the presidential statement issued by the Security Council in September 2021, in order to avoid damage caused by this project to the downstream countries, and to enhance cooperation among the peoples of Egypt, Sudan and Ethiopia. The Saudi side expressed its full solidarity with the Arab Republic of Egypt in all the measures it takes to protect its national security.”

Ethiopia would like Saudi Arabia to increase its investment projects. President of Ethiopia Sahle-Work Zewde announced in 2019 that her government aims to encourage Saudi investors for more investments in Ethiopia in various sectors.

The Saudi stance on the GERD comes in light of Emirati-Saudi competition especially for obtaining investments and buying assets in Egypt. For its part, Cairo is tapping into Saudi support on the GERD crisis to counter the United Arab Emirates’ stance, which seems to have taken a neutral stance.

The UAE’s support for Ethiopian Prime Minister Abi Ahmed in his war against the Ethiopian Tigray Front has stirred Egyptian discontent.

This was confirmed in a report dated June 21 by the Arabic Post newspaper, which indicated that Egypt is frustrated and disappointed with the UAE regarding its position on the GERD.

Meanwhile, Saudi support for Cairo on the GERD triggered more discontent between Saudi Arabia and the UAE, pushing Egypt and the kingdom closer.

Mada Masr newspaper quoted in an article published June 20 Egyptian government sources commenting on this issue. “The unease that both Cairo and Riyadh feel regarding the political choices of the newly appointed UAE ruler Mohammed bin Zayed has helped bring Egypt and Saudi Arabia closer despite some disappointments on both sides that cannot be disregarded,” the article said.

It continued, “Egypt is particularly ‘upset’ with bin Zayed’s choices in Ethiopia and Libya, and the Saudis are still ‘angry’ with the UAE policies on Yemen.”

Observers believe the Saudi support is a trump card Egypt can use to encourage the UAE to play an influential role in resolving the GERD crisis and breaking its neutrality. This is especially true in light of Abu Dhabi's attempts to overcome its predicament with Cairo and broker a deal between the three GERD countries, namely Egypt, Sudan and Ethiopia.

In an article dated May 16, Mada Masr quoted an Egyptian government official and an informed political source in the Gulf as arguing that the “UAE’s footprint in Ethiopian politics may only continue to grow, as it has made a US$20 billion economic development proposal to Sudan, Egypt and Ethiopia in order to bypass the political deadlock over the filling and management of the Grand Ethiopian Renaissance Dam.”

“The deal, which has brought the three countries together for technical talks, would see the Emirates invest in projects across the three Nile Basin countries over the course of seven years, ‘establishing a mechanism that will make it impossible for any of the three countries to harm the interests of the other two countries,’” the article added.

However, Saudi support for Egypt on the GERD, in addition to Riyadh’s announcement of more investments in Cairo estimated at $30 billion, does not come without a price for Egypt, especially with the approaching visit to Saudi Arabia by US President Joe on July 15.

According to Al-Araby Al-Jadeed newspaper, in an article dated June 20, 2022, "The main goal behind the Saudi Crown Prince's visit to Cairo is to unify positions to appear before the US administration and US President Biden as one team ahead of the latter's visit to the region.”

The newspaper added, "The important strategic point for the Saudi side, which the Crown Prince was keen to discuss with Sisi, is the issue of confronting Iran and forming an Arab NATO."

“The Saudi support is an important step to back Egypt's attempts to solve the GERD crisis,” Tarek Fahmy, a professor of political science at Cairo University, told Al-Monitor. “Egypt needs the support of influential and powerful countries in Ethiopia, such as Saudi Arabia, amid the looming third filling of the GERD and in light of Egypt's attempts to hold negotiations to compel Ethiopia to conclude a binding agreement on the filling process.”

Ethiopia is set to complete the process of the third filling of the GERD next August. In the meantime, all attempts to push the crisis to the negotiating table again are frozen with no signs of solution on the horizon, in light of Egyptian official demands for the return of negotiations on a binding agreement on the mechanism of filling the dam.

Fahmy explained, "The Saudi support for the Egyptian position on the GERD crisis remains, however, mere diplomatic support. Cairo needs more Saudi pressure on Ethiopia, such as declaring a freeze on any investments in Ethiopia in the coming period if the GERD crisis drags on.”

He added, "Cairo will seek to persuade Saudi Arabia to ask Washington to play a role in resolving the GERD crisis and exert pressure on Ethiopia. Saudi Arabia's official announcement of support for Egypt in the dam crisis may push other countries to openly voice their support for Egypt or mediate between Egypt and Ethiopia."