Close UAE-Ethiopian relations remain a source of concern for Egypt, especially after tension escalated between Cairo and Addis Ababa over the GERD crisis. 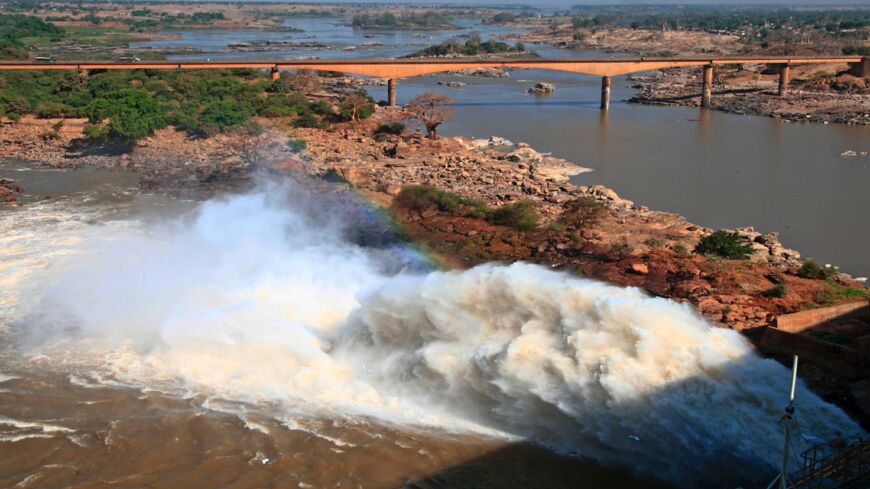 A picture shows water bursting out of the Roseires Dam on the Blue Nile River at al-Damazin in southeastern Sudan, on Nov. 27, 2020. The Roseires hydropower complex is located 105 kilometers east of the Grand Ethiopian Renaissance Dam. - EBRAHIM HAMID/AFP via Getty Images

Emirati-Ethiopian relations are still a source of concern for Egypt, especially as the dispute over the Grand Ethiopian Renaissance Dam (GERD) intensifies between Cairo and Addis Ababa.

The United Arab Emirates’ position on the GERD crisis remains unclear, unlike the positions of other Gulf countries such as Saudi Arabia and Bahrain, which issued statements stating their support for Egypt in maintaining its water security.

However, the UAE took a neutral stance without clear bias toward Egypt, as it issued a statement on March 31 calling on “the importance of working through applicable international laws and standards to reach a solution acceptable to all and that secures the rights and water security of the three countries.”

As the GERD crisis escalated, the UAE announced on April 1 sending aid to the Tigray region in Ethiopia. UAE Ambassador to Addis Ababa Muhammad al-Rashidi noted that “the aid comes within the framework of strong relations with Ethiopia.”

However, on April 7, Mada Masr newspaper quoted an Egyptian source as saying that “the UAE offered to the head of the Sudanese Sovereignty Council, Lt. Gen. Abdel Fattah al-Burhan, to separate the Sudanese-Ethiopian file, whether with regard to the borders or the potential repercussions of the GERD, from the Egyptian concern about the repercussions of the GERD on Egyptian water resources,” which weakens the Egyptian-Sudanese alliance against Ethiopia.

On Dec. 21, 2020, Mada Masr newspaper also cited an informed Egyptian source as saying, “Egypt discovered that the UAE was not interested in one of the main Egyptian security concerns in the region, as Abu Dhabi was unwilling to exert the pressure that Cairo wants on Ethiopia in order to facilitate a political and legal settlement regarding the construction, filling and operation of the GERD.”

On March 31, the Abu Dhabi Chamber of Commerce and Industry organized, in cooperation with the Ethiopian Embassy in the UAE, a virtual seminar to discuss opportunities for Emirati investments in Ethiopia. Suleiman Dedefo, Ethiopia’s ambassador to the UAE, said during the seminar, “Between 2002 and 2020, 121 Emirati companies entered the Ethiopian market in many investment sectors, with a capital of over 2 billion Ethiopian birr ($47.7 million), and created permanent and temporary job opportunities for more than 10,000 Ethiopian citizens.”

Also at the seminar, Assefa Mulugeta, director-general of the export promotion department at the Ethiopian Ministry of Trade and Industry, revealed that “the volume of trade between Ethiopia and the UAE between 2010 and 2019 amounted to over $450 million.”

The Emirati support for Ethiopia extended militarily, as the Tigray People's Liberation Front (TPLF) accused on Nov. 15, 2020, the UAE of supporting the Ethiopian government in its war against the TPLF by providing the government forces with drones.

In this context, Ahmed al-Tantawi, head of the Egyptian Dignity Party and former parliament member, told Al-Monitor, “The UAE took a negative neutrality stance toward Egypt over the GERD crisis.”

He added, “Egypt and the UAE have very different stances when it comes to the GERD, as Abu Dhabi enjoys close relations with Ethiopia.”

Tantawi noted, “The UAE must stand with Egypt, especially since this crisis threatens Egyptian water security, just as Cairo stood with the UAE and the Gulf states in many crises out of respect for the Arab unity.”

He pointed out, “The UAE can play an active role in the GERD crisis, based on the powerful Emirati influence on the ruling regime in Ethiopia.”

Tantawi explained, “The UAE should have declared that it stands by Cairo in the GERD crisis, instead of taking unnecessary neutral stances in a fateful crisis that Egypt suffers under.”

Tantawi said “the Gulf countries, especially the UAE, should hold an Egyptian-Gulf summit with the participation of Ethiopia to solve the GERD crisis,” adding, “The Emirati investments in Ethiopia should be a pressure card that Abu Dhabi uses in order for Egypt to succeed in preserving its right to the Nile water.”

He pointed out that “Gulf investments, most notably the UAE’s, could also be a motivation for Ethiopia to return to serious negotiations and agree to conclude a binding legal agreement [before] the second filling of the GERD.”

Tantawi noted, “The recent attempts at rapprochement between Egypt and Turkey may have a negative impact on the Emirati position toward Egypt in the GERD crisis, but the UAE’s unspoken rejection of the Egyptian-Turkish reconciliation is not a pretext for Abu Dhabi to abandon Cairo in the GERD crisis.”