As the conflict escalates between the Ethiopian government and the Tigray region, the United Arab Emirates' support for the Ethiopian regime threatens to strain Emirati-Egyptian relations. 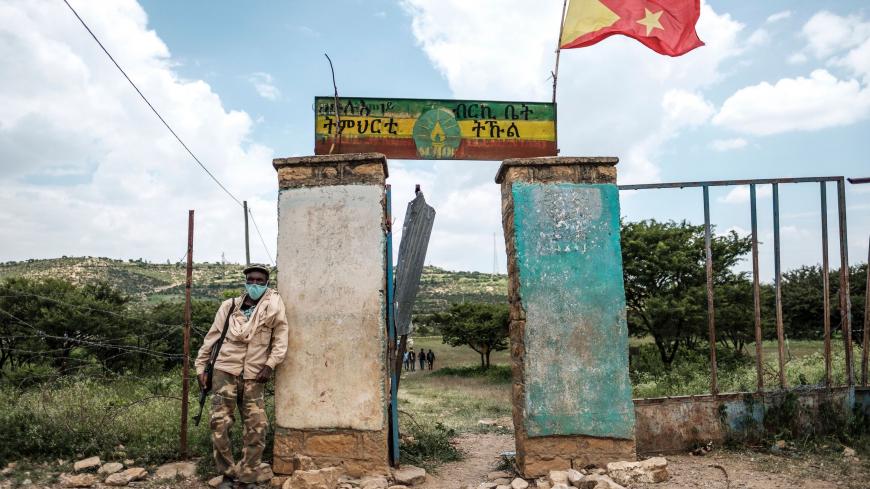 An armed member of a community security force stands in front of a school where a polling station is located during Tigray's regional elections, in the town of Tikul, 15 kms east from Mekelle, Ethiopia, on Sept. 9, 2020. - EDUARDO SOTERAS/AFP via Getty Images

CAIRO — As Ethiopia teeters on the brink of civil war, the Ethiopian army threatened on Nov. 22 to send tanks to Mekelle, the capital of the northern Tigray region. It warned civilians that it could bomb the city, inhabited by 500,000 people.

“The next phases are the decisive part of the operation, which is to encircle Mekelle using tanks, ending the battle in the mountainous areas and advancing toward the fields,” military spokesperson Col. Dejene Tsegaye told the Ethiopian Broadcasting Corporation.

The Ethiopian army seized the city of Adigrat, one of the largest cities in the region, and the towns of Axum and Adwa on Nov. 20. The fighting killed hundreds of people and displaced tens of thousands into neighboring Sudan.

On Nov. 24, the Ethiopian Human Rights Commission said over 600 people were killed Nov. 9 in Mai Kadra, a town in the Tigray region, by armed gangs linked Ethiopia. The commission’s report found that youth groups known as Samri — in coordination with a local militia and police forces — “carr[ied] out door-to-door raids and kill[ed] hundreds of people” based on ethnicity.

Despite international calls led by the African Union to stop the fighting and US and UN warnings of a humanitarian catastrophe, Ethiopian Prime Minister Abiy Al-Ahmed rejected calls for talks or an end to the escalation.

As the conflict in Ethiopia intensified, the United Arab Emirates has emerged as a key player, given its relationships with both Ethiopia and Eritrea.

On Nov. 15, Tigray People's Liberation Front (TPLF) spokesperson Getachew Rida accused the UAE of supporting the Ethiopian government with drones in its war on the region. He added that these aircraft are launched from the Emirati military base in Assab, Eritrea. He provided no evidence to this claim.

On Nov. 19, Ethiopia’s ambassador to the UAE Suleiman Dedefo met with Reem al-Hashimy, the UAE’s minister of state for international cooperation, and promised the UAE to end the military operation against TFLP “as soon as possible.”

Eritrean writer and analyst Shifa al-Afari told Al-Monitor that the Emirati support for Ethiopia could be expected as controlling Ethiopia would guarantee great influence on the continent.

The UAE has 92 investment projects in Ethiopia in the sectors of agriculture, industry, real estate, health and mining. The UAE has expressed concerns over the Ethiopian conflict; in a Nov. 22 statement, the UAE foreign minister called for "the need to return to dialogue and implement the rule of law" stressing "that Ethiopia is the key to security and stability in the Horn of Africa and the region."

On March 20, 2019, Abdulla bin Ahmed Al Saleh, the undersecretary of the UAE Ministry of Economy for Foreign Trade and Industry, said during the UAE-Ethiopia Business Forum that UAE exports to Ethiopia in 2018 amounted to $200 million, an increase of 46% compared to 2017.

On July 8, 2019, Ahmed announced that his country is sending 50,000 Ethiopian workers to the UAE as part of a program to reduce unemployment in Ethiopia.

On Feb. 27, the Khalifa Fund for Enterprise Development concluded a $100 million agreement with the Ethiopian Ministry of Finance to support and finance micro, small and medium-sized projects in Ethiopia.

In an interview with Al-Ain News on April 6, Ethiopia’s Minister of Foreign Affairs Gedu Andargachew said, “There are several countries that supported transformation and reforms in Ethiopia, but the UAE played a leading role in this regard.” He went on, “It is impossible to estimate the support provided by the UAE to Ethiopia, especially in the economic field.”

Afari said that the other reason behind the Emirati military support for Ethiopia is to counter the TFLP's influence on opposition groups in Eritrea that could affect neighboring countries where the UAE has military bases.

On Nov. 15, Rida announced that the TPLF had attacked facilities in Eritrea including the airport in the capital Asmara.

Abu Dhabi has longstanding ties to Eritrea, and since 2015, the UAE has had a military base in the port of Assab, its first military such facility abroad. Eritrea and Ethiopia signed a peace agreement in 2018 following years of conflict. In October 2019, Ethiopian Prime Minister Ahmed was awarded the Nobel Peace Prize for his work in brokering the deal. Addis Ababa and Asmara are on the same side currently against the TPLF.

Asked about the Ethiopian conflict's impact on the Grand Ethiopian Renaissance Dam (GERD) issue, Afari said that the situation is difficult for the Ethiopian prime minister to control. Through this aggression, he said, Ahmed paved the way for foreign intervention, which undermined his position in the GERD crisis and gave Egypt a pressure card to use.

Afari said that the Emirati support for Ethiopia in its war against the TPLF could trigger a crisis between the UAE and Egypt. Egypt might step in to support the TPLF, putting Cairo and Abu Dhabi in indirect conflict.

In a Nov. 19 article for Foreign Policy, Alex de Waal, director of the World Peace Foundation, predicted chaos in northeast Africa and said other countries are likely to step into the current conflict due to the foreign intervention of Eritrea and the UAE.

However, Hatem Bashat, former undersecretary of the General Intelligence Service and a member of the African Affairs Committee in the Egyptian Parliament, told Al-Monitor that Egyptian-Emirati relations are strong and built on converging views on many regional issues. Chief among them is confronting the Turkish-Qatari alliance in the Middle East.

Bashat added, “The UAE support for the Ethiopian regime is not only aimed at creating areas of influence in Africa, but also seeks to preserve its interests in Ethiopia. “Egypt is present in Africa and will deal with Ethiopia in a way that fits its interests. It will seek to use many cards, including Eritrea, to place pressure on Ethiopia, as Eritrea is playing a major role in the internal Ethiopian conflict.”

On Nov. 18, Egyptian Foreign Minister Sameh Shoukry met with his Eritrean counterpart Othman Saleh and Yamani Jabr Ab, a political adviser to the Eritrean president, to discuss the situation.