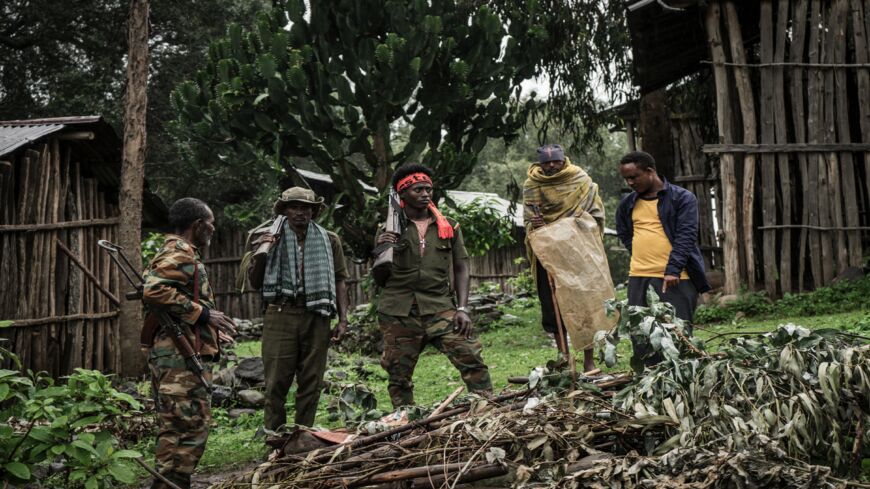 Amhara militiamen and villagers stand near a mass grave for victims killed in an alleged massacre in the village of Chenna, 95 kilometers northeast of the city of Gondar, Ethiopia, on Sept. 14, 2021. A spokesman for the rebel Tigray People's Liberation Front (TPLF) denied its forces were to blame. - AMANUEL SILESHI/AFP via Getty Images

CAIRO — Egypt, as well as the entire international community, is in a state of anticipation after the regional and ethnic conflict in Ethiopia further escalated as the Tigray People's Liberation Front (TPLF) continues to take over strategic cities, namely Dessie and Kombolcha in the Amhara region, which are only about 400 kilometers from Addis Ababa. The TPLF has also seized areas in the Shewa region adjacent to the capital.

Both the Ethiopian government and the people fear the TPLF could reach Addis Ababa, especially after it succeeded in forming an alliance that includes nine armed groups from the Oromia region.

The recent developments in Ethiopia raise great concerns for the Egyptian government, especially since Cairo is in disagreement with Addis Ababa due to the latter’s refusal to reach a binding legal agreement on the mechanisms of operating the Grand Ethiopian Renaissance Dam (GERD), whose construction cost on the Blue Nile amounted to nearly $6 billion.

Maj. Gen. Mohammed Ali Bilal, former deputy chief of staff of the Egyptian armed forces, told Al-Monitor, “There is no doubt that any conflicts or instability in Africa affects Egypt because we belong to this continent. The developments in Ethiopia affect us directly with regard to the GERD issue. Should the conflict persist for a long time, who will Egypt negotiate with? What if the TPLF makes it to power?”

He added, “We are not sure if the TPLF agrees with us on the mechanisms to operate the dam. Egypt is thus keeping a close eye on the conflict in Ethiopia; Cairo wants stability in Addis Ababa so it can negotiate with a stable government.”

Ali Bilal noted, “I think that Egypt is currently consulting with the United States in order for Washington to pressure the parties to the conflict to end the current crisis.”

The conflict in Ethiopia has left nearly 5 million people in dire need of food and aid, and at least 350,000 people are on the brink of famine. Tigray experienced a famine between 1983 and 1985 that killed more than a million people and displaced over 2 million internally, according to reports by US organizations concerned with food aid.

The Tigray region is home to 7 million people out of a population of 122 million people in Ethiopia. It is the third-largest ethnic group in the country after the Oromia and Amhara regions. Ethiopia is divided into 10 regional states under a federal system, which gives each ethnic group the right to administer its own region and determine its own fate. Prime Minister Abiy Ahmed is trying to undo this, which is why he described what Tigray did — it held regional elections in September 2020 — as crossing a red line.

The conflict between Tigray and the Ethiopian government has nothing to do with the GERD. Tigray supports the dam because it is an Ethiopian project, not Ahmed's project. But the conflict continues between the two parties due to the TPLF’s desire to lift the siege imposed on the people of Tigray. Meanwhile, the government obstructed the delivery of humanitarian aid to the residents of the region. On the other hand, the TPLF refuses to hand over part of the territory to Eritrea, demanding the withdrawal of Eritrean soldiers and militias from the region, especially since the TPLF accuses Ahmed of rapprochement with Eritrea at the expense of the interests and people of Tigray.

A few months after assuming power, Ahmed signed a peace agreement with Eritrea in 2018 and was awarded the Nobel Peace Prize in 2019. However, this angered the residents of the Tigray region, and the TPLF began to renew the conflict with the Ethiopian army. On Nov. 4, 2020, the TPLF carried out an attack on the northern command of the Ethiopian army in the city of Mekelle, the capital of Tigray, which prompted Ahmed to send forces from the Ethiopian army to Tigray. Indeed, those forces succeeded after three weeks of battles in tightening their grip on the region, forcing TPLF leaders to flee to nearby mountains.

Ahmed immediately announced a cessation of hostilities on Nov. 28, 2020, which prompted the TPLF forces to gradually return to the region until they were able to take complete control in June. And so the conflict was once again renewed.

Hussein Haridi, an Egyptian ambassador and a former assistant foreign minister, told Al-Monitor, “Egypt wants calm and stability in Ethiopia. We want the current or future government in Addis Ababa to be negotiating with us in good faith in order to reach a solution or a binding legal agreement that meets the interests of the parties to the crisis. The security and political situation in Ethiopia negatively affects the possibility of reaching a binding legal agreement on the GERD, so Cairo hopes for more stability in Ethiopia to be able to manage the GERD issue in a constructive manner that serves the interests of all parties.”

In order to confront the threats of Tigray’s allied forces to advance toward the capital, the Ethiopian government made many decisions, the most prominent of which was imposing a state of emergency on the whole country for a period of six months. Ahmed also called on Ethiopians to register their weapons, prepare to defend themselves and the neighborhoods they live in, and donate their money to the Ethiopian army, also calling on retired soldiers to join the ranks of the Ethiopian army once again to confront the Tigray forces.

TPLF spokesman Getachew Reda stated that the TPLF forces are planning to overthrow Ahmed's government, form an interim government, call for a national dialogue and try the current government.

Speaking about the extent of Ethiopia’s ability to implement the third filling of the GERD, Abbas Sharaki, professor of geology and hydrology, told Al-Monitor that there are certain measures that Addis Ababa must take before implementing the third filling, including drying the water that passes through the middle corridor to be able to raise it with concrete.

Ethiopia had announced that the GERD is expected to start producing 700 megawatts of electricity in 2022, raising the country's electricity generation capacity to 14%.

Sharaki denied that Ethiopia had succeeded in storing 18.5 billion cubic meters during the second filling as it claimed, saying, “The concrete height of the middle corridor is no more than 573 meters so far, and this is practically only enough to store 8 to 9 billion cubic meters.”

The Security Council called for the need of a cease-fire in Ethiopia, and the US State Department renewed its call for US citizens in Ethiopia to leave the country immediately. Meanwhile, the African Union announced that there are no great opportunities to stop the conflict in Addis Ababa.