Ethiopia has accused Egypt and Sudan of supporting rebels attempting to sabotage the construction of the contested Grand Ethiopian Renaissance Dam in the latest escalation between the three countries. 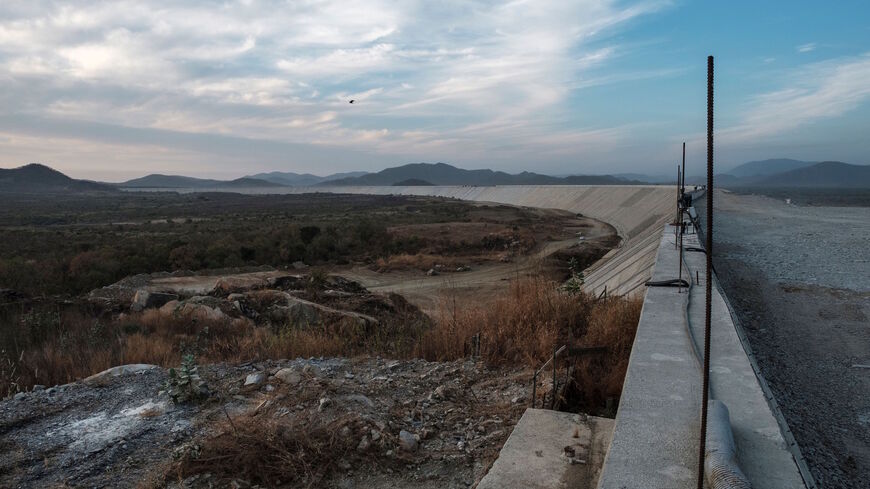 A general view of the Saddle Dam, part of the Grand Ethiopian Renaissance Dam, Ethiopia, near Guba in Ethiopia, on Dec. 26, 2019. - EDUARDO SOTERAS/AFP via Getty Images

Tensions between Egypt, Sudan and Ethiopia further escalated after Addis Ababa implicitly accused Cairo and Khartoum of supporting insurgents who are trying to impede the construction of the controversial Grand Ethiopian Renaissance Dam (GERD).

In a Sept. 3 statement, the Ethiopian National Defense Force said they stopped a “terrorist” attempt organized by members of the Tigray People's Liberation Front (TPLF) who infiltrated Ethiopia's far western region of Benishangul-Gumuz from Sudan to target the GERD.

Col. Seifi Engi, the Ethiopian army's coordinator of operations in the Mutakal area in the Benishangul-Gumuz region, said in the statement the Ethiopian army stopped the infiltration attempt and killed more than 50 rebels; 70 others were injured.

“The fighters had light and heavy weapons and had set up mines,” Engi added. A large number of the fighters escaped north where the Ethiopian federal government is carrying out an armed operation against the rebels in Tigray, he continued; the Ethiopian army confiscated some of the weapons left behind and destroyed others.

Engi further accused the fighters of joining the “historic enemies” of Ethiopia in their attempt to obstruct the construction of the GERD. He did not specify the identity of those “enemies.”

Fana BC radio station, which is close to the Ethiopian government, quoted Engi as saying the Ethiopian army closely monitors the protection of the GERD from any threat to sovereignty coming from either internal or external sources.

Emad el-Din Hussein, editor-in-chief of al-Shorouk newspaper and member of the Egyptian Senate, said in an article published on Sept. 5 the Ethiopian army's accusation aims to damage the reputations of Egypt and Sudan and hold them responsible for the failures of the internal policies of the Abiy Ahmed government.

Ethiopian army forces withdrew from most of Tigray by the end of June, and the government unilaterally declared a cease-fire for humanitarian reasons.

Still, reports showed ongoing human rights violations in the Tigray region and death counts of thousands of civilians. According to the United Nations, around 5 million people in Tigray depend on urgent aid while 400,000 people suffer from famine. In July, the fighting expanded to the Afar and Amhara regions bordering Tigray.

Sudan, for its part, has denied involvement in the operation targeting the GERD. In a statement on Sept. 4, the Sudanese Ministry of Foreign Affairs said the Ethiopian claims are false and only serve political propaganda.

On Sept. 3, the media adviser to the commander-in-chief of the Sudanese armed forces, Al-Taher Abuhaga, asked the Ethiopian state to solve its internal problems without implicating Sudan. He said the Ethiopian claims reflect the difficult situation the Ethiopian regime is facing, especially since it continuously violates its people's rights.

Egypt did not officially comment on the Ethiopian claims.

Attiya Essawi, an Egyptian writer specialized in Ethiopian affairs, said there is no evidence to confirm the involvement of Egypt and Sudan in the attack. He told Al-Monitor, “The two states do not benefit from internal instability in Ethiopia.”

The Ethiopian accusations come amid rising tensions between Egypt and Sudan because of the failure to reach an agreement on the GERD. Addis Ababa is building the dam on the Blue Nile, the main tributary of the Nile. Egypt and Sudan are worried the dam will limit the flow of Nile waters, which they depend on for most of their water needs.

Meanwhile, the Ethiopian-Sudanese relations are at their worst because of a dispute at the border between the two countries. Add to that, Ethiopia blames Sudan for interfering in the Tigray crisis.

Essawi believes expanding war zones in Ethiopia is in neither Egypt's nor Sudan's interest because the continued internal political tensions make the Ethiopian government more stringent during GERD negotiations.

Najlaa Meri, assistant professor of political science at King Abdulaziz University in Saudi Arabia and expert on African affairs, told Al-Monitor Ethiopia is trying to spread a conspiracy theory to justify to the local public any delays in completing the GERD and generating electricity. It is easier to blame external sides like Egypt and Sudan given the tensions that already exist between the three countries, she said.

Meanwhile, Cairo does not foresee any military solution to solve the dispute over the GERD.

Egyptian Foreign Minister Sameh Shoukry said in an interview on Sept. 8 with Bloomberg TV that his country is keen on avoiding an armed struggle with Ethiopia over the GERD crisis. He said Egypt is committed to the talks.

During a joint press conference with his Cypriot counterpart, Nicos Anastasiades, in Cairo on Sept. 4, Egyptian President Abdel Fattah al-Sisi reiterated the need for tripartite negotiations to reach a legally binding agreement about filling and operating the GERD. He said it is important for the international community to follow up on this matter in order to maintain the region's stability.

Sisi had warned on April 7 against any meddling with Egypt's share of the Nile water, stressing he is “open to all options.”

Sisi's warning was not his first. On March 30, he said, “No one can take a drop of water from Egypt. … “If it happens, there will be inconceivable instability in the region that no one could imagine.”

The GERD crisis has reached a dead end amid fears of escalation and military clashes in an already volatile region. The African Union's repeated attempts since June 2020 to mediate a deal that would end the stagnating talks have failed. The last attempt was in Kinshasa, capital of the Democratic Republic of the Congo, in April 2021, and it did not materialize in relaunching the talks.

Given the current situation, Essawi believes it will be difficult for the negotiations to resume. He added, “Countries that previously expressed willingness to help in solving the dispute, like the United States, are no longer interested even for a short period of time after the second filling of the GERD reservoir in July. After all, the filling did not lead to any major damages for the two countries in terms of water issues.”

“To some international parties, the GERD issue no longer warrants an armed clash, so there is no rush in resolving it. The issue might regain momentum in case of escalation if no agreement is reached by the time the third phase of the GERD filling is due in July 2022,” he added.