The armed conflict in Ethiopia could affect the Grand Ethiopian Renaissance Dam file and slow down construction of the dam, which Egypt sees as a big threat to its water security. 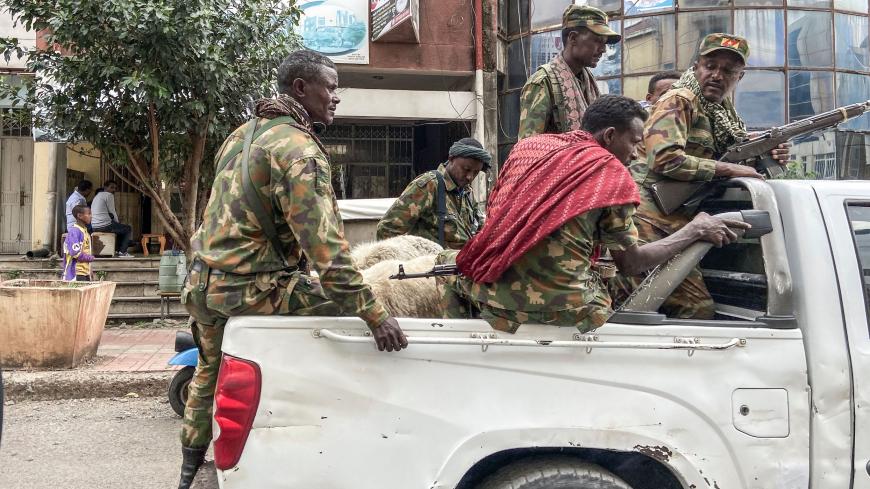 Members of the Amhara militia that combat alongside federal and regional forces against the northern region of Tigray ride on the back of a pickup truck in the city of Gondar, on Nov. 8, 2020. - EDUARDO SOTERAS/AFP via Getty Images

The armed conflict in Ethiopia between the Ethiopian government and the Tigray People’s Liberation Front (TPLF) has recently escalated. Tensions began to rise after the Tigray region rejected Prime Minister Abiy Ahmed’s decision to postpone the parliamentary elections because of the coronavirus pandemic and decided unilaterally to hold its own polls in September. On Nov. 5, Ahmed declared a wide-scale war on the TPLF, after the latter attacked a federal military base in Tigray.

The TPLF had dominated the ruling coalition in Ethiopia before Ahmed seized power in 2018, but it has refused to join Ahmed’s administration, accusing it of targeting and marginalizing its leaders.

The TPLF, which includes around a quarter of a million armed fighters, was also involved in a war with Eritrea over disputed border territory between 1998 and 2000, which ended with Ethiopia and Eritrea signing a peace agreement.

The recent fighting in Ethiopia coincides with the stalled negotiations on the Grand Ethiopian Renaissance Dam (GERD), which came to a halt on Oct. 22 upon Sudan’s request.

Observers believe the resumption of negotiations between Egypt, Ethiopia and Sudan in the coming days will be difficult due to the armed conflict in the Tigray region.

The bloody incidents in Ethiopia are taking place near the construction site of the GERD, where most recently 34 people were killed in an attack on a bus in Benishangul-Gumuz in western Ethiopia.

Egyptian media has been shedding light on the incidents in Ethiopia and their impact on the GERD crisis. During his television program “Al Hekaya” on Nov. 16, Amr Adib, an Egyptian pro-government media figure, criticized Turkey’s intervention in the Ethiopian armed conflict and accused Turkey of exploiting the incidents for rapprochement with Ethiopia.

In this context, Hani Raslan, head of Sudan and Nile Basin studies department at Al-Ahram Center for Political and Strategic Studies, told Al-Monitor, “Ethiopia is witnessing a fierce civil war that will affect the GERD crisis.”

“Ethiopia's resources are scarce. Therefore, when the Ethiopian government engages in a large-scale military operation against Tigray, this will definitely affect the funding allocated for the construction of the GERD, because the country’s resources will be channeled to financing the war,” he explained.

Raslan added, “The civil war in Ethiopia will be a protracted one due to its ferocity, and therefore, after the war ends, Ethiopia will find itself faltering in financing the construction of the GERD.”

He believes “the Ethiopian prime minister made a big mistake that will definitely affect his position in the GERD negotiations after the Ethiopian army bombed the Tekeze Dam in Tigray.”

On Nov. 13, a local official in the Tigray region, Debretsion G. Michael, accused the Ethiopian army of targeting the Tekeze Dam with air raids, cutting off power from all of the region.

Although the Ethiopian government denied responsibility for targeting the dam, Raslan said, “Targeting vital facilities such as the Tekeze Dam puts Ethiopia in an embarrassing position and proves that the GERD may be targeted in the event of an outbreak of violence in the country. Egypt might exploit this point in the negotiations by confirming its mistrust in Ethiopia’s ability to protect the GERD. If the dam is jeopardized or collapses, it might drown Sudan and harm Egypt.”

Raslan added, “The civil war in Ethiopia has destroyed the political future of Ahmed, whom the world now sees as a warlord rather than a leader who won a Nobel Peace Prize. The United Nations and rights organizations have accused him of civilian genocides, thus weakening his position in the GERD dossier in front of the world.”

Raslan said, “Egypt is keeping mum and has not commented on the incidents in Ethiopia so that disputing political parties in Ethiopia would not take advantage of the Egyptian position.”

Egypt has yet to release an official statement or comment on the armed conflict in the Tigray region in Ethiopia.

As for Sudan, Raslan said, “Sudan is negatively affected by the conflict in Ethiopia since [thousands] of Ethiopian refugees are flooding to it. Sudan wants this crisis resolved as soon as possible, even if it would have been in its interest in the GERD negotiations.”

Abbas Sharaky, a professor of geology and water resources at the University of Cairo who specializes in Nile Basin countries, told Al-Monitor, “The construction of the GERD did not stop because of the armed conflict, but the pace of construction has largely slowed down.”

He said, “The Ethiopian government has its hands full with the armed conflict with the [TPLF], and it will not give importance to the GERD developments. This gives Egypt a chance to reshuffle its negotiation cards and gain international and African support.”

He added, “The civil war in Ethiopia will protract due to the military power of the [TPLF] and the Ethiopian government’s insistence on destroying the front out of fear of division and disintegration in the country, which would weaken the Ethiopian economy and negatively affect financing the GERD construction.”

He pointed out that “Egypt must [take advantage] and call for halting the construction of the GERD and the storage of water inside it altogether since the negotiations have been suspended.”