The Ethiopian Prime Minister called out his neighbors for fueling the recent round of violence in Ethiopia's western Benishangul-Gumuz region where the Grand Ethiopian Renaissance Dam is located. 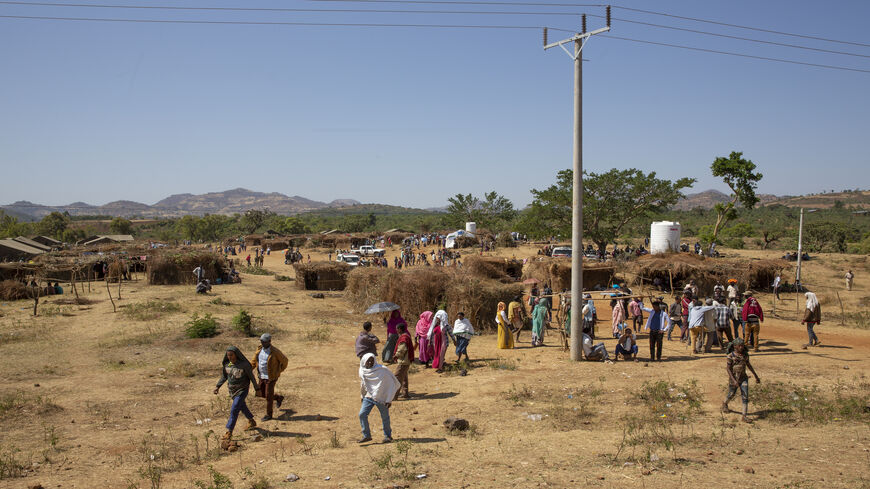 Survivors and refugees of the Benishangul-Gumuz massacre walk through the displaced persons camp in the city of Chagni, Ethiopia, Dec. 31, 2020. -

CAIRO — Violence has been ongoing in Ethiopia's western region of Benishangul-Gumuz where the Grand Ethiopian Renaissance Dam (GERD) is located, with Ethiopia announcing April 26 that more than 200 people were killed and thousands were displaced in the ongoing clashes between the government forces and armed groups.

On April 22, the government-appointed Ethiopian Human Rights Commission announced  that an armed group has taken full control of a county in Benishangul-Gumuz, killing and committing acts of violence against civilians, while security forces could not stop it.

Clashes had occasionally erupted in the past in the region that is home to various ethnic groups, including Gumuz, Agaws and Shinasas and the Amhara. This is the first time, however, that an armed group takes full control of several cities in the region, in light of the security forces’ failure to counter it.

Prime Minister Abiy Ahmed headed a meeting of Ethiopia’s National Security Council on April 24 to discuss the developments in Benishangul-Gumuz. Immediately following the meeting, Ahmed issued a statement accusing foreign parties, in reference to Egypt, of causing chaos and instability in the country.

Ahmed said that these parties “seek to plunge the country into chaos. He added, "Despite the plots and pressure, Ethiopia will fill the GERD reservoir on time."

The following day, Ethiopia’s Irrigation Minister Seleshi Bekele referred to plots against his country, due to the GERD. In a Twitter thread, he said, “It is clear that there is a plot designed to thwart our efforts and undermine our very existence. That is why we must all persevere and do our part.”

Ethiopia’s parliamentary committee tasked with appraising the dispute over the GERD officially accused Sudan and Egypt on March 5 of “standing behind the violence in the Benishangul-Gumuz region.”

The committee’s head, Abdallah Hamo, said that the committee’s investigation found that Sudan and Egypt support violence in the region, and that the armed groups received training and illegal weapons at the border with Sudan.

Sudanese Foreign Ministry spokesman Mansour Boulad responded to the Ethiopian accusations on March 5, saying in a press statement, “Sudan has no intention to invest in violence in its relations with other countries.”

In the absence of any official Egyptian comment on the developments in Benishangul-Gumuz and the Ethiopian accusations, Egyptian media outlets lashed out at Addis Ababa and backed the rebellion in the region. Egypt’s Al-Bawaba News, which is close to the state, reported in an April 23 article that a civil war is unfolding in Ethiopia due to the poor economic and social conditions in the country and its citizens being marginalized and isolated.

TV host Ahmed Moussa, who is close to security quarters in Egypt, broadcast on Sada el-Balad channel on April 25 video segments of Ethiopians chanting slogans against their prime minister and tearing up his photo.

Moussa said that the Benishangul-Gumuz region was part of Sudan in the past, and that there is an Egyptian-Sudanese escalation in light of Ethiopia’s intransigence in the GERD file.

Commenting on the Ethiopian parliament's accusations that Egypt and Sudan are involved in the violence in the Benishangul-Gumuz region, Maj. Gen. Ahmed al-Awadi, undersecretary of the Egyptian parliamentary Defense and National Security Committee, told Al-Monitor, “Egypt will not keep quiet toward Ethiopia’s intransigence regarding the GERD. As President Abdel Fattah al-Sisi said earlier, all options are open in preserving Egypt's right to the Nile waters, and the waters of the Nile River are a red line for the Egyptians.”

Sisi had warned April 7, “No one can take a single drop of water from Egypt [and] all options are open.”

On March 30, Sisi said during a press conference, “We are not threatening anyone, but no one can take a drop of water from Egypt [or] the region would witness a state of instability that no one can imagine.”

Awadi said, “Ethiopia insists on the second filling of the GERD reservoir even before a binding legal agreement with Egypt and Sudan is reached. It even considers that it is the only country entitled to the Nile waters, which Egypt totally rejects. The parliamentary defense committee affirms the Egyptians’ right to resort to all means so as to preserve their rights, and that all options are available in countering the Ethiopian intransigence.”

Awadi noted that the Ethiopian society is disintegrated, as sporadic demonstrations occasionally erupt in the country, due to the prime minister’s policies of marginalization and persecution of several social groups.

Awadi denied any Egyptian involvement in the recent violence in the Benishangul-Gumuz region.

On April 19, Ahmed said that Ethiopia will fill the GERD reservoir in July and August, despite objections from the two downstream countries, Egypt and Sudan.

Egyptian Minister of Water Resources and Irrigation Mohamed Abdel Ati said in a statement April 18 that Cairo submitted 15 different proposals for the filling and operation of the GERD over the past years, so as to meet the Ethiopian demands without causing any damage to Egypt and Sudan. Yet the Ethiopian side rejected them all, he added.

Eritrean writer and analyst Shifa al-Afari told Al-Monitor that the Benishangul-Gumuz region is currently seeing unprecedented tension that could be characterized as a “state of war.” According to him, this is the first time that this armed group, which took control of the county, and these weapons appear in the region.

Afari said, “I do not rule out any Egyptian and Sudanese efforts to use the rebels in Ethiopia as a pressure card and to provide them with weapons, in light of the difficult choice to head to a direct war and in an attempt to deter Ethiopia from taking unilateral actions.”

Samir Ghattas, a former Egyptian member of parliament and head of the Middle East Forum for Strategic Studies, told Al-Monitor, “Egypt is in a difficult position as Ethiopia insists on the second filling of the GERD, and given the difficulty to go into a direct war out of fear of international reactions. Egypt's support for the rebels is very probable, as the Nile waters consist of a life or death matter for the Egyptians, and it is possible for Egypt to use all the cards to pressure Addis Ababa in its battle with Ethiopia.”