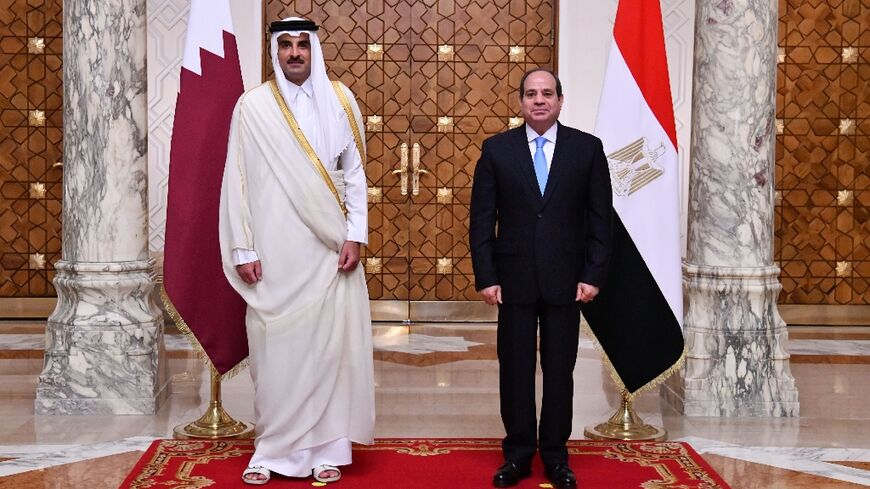 Egypt's leader on Saturday discussed energy and investment with Qatar's emir, who was in Cairo for the first time since the countries restored relations following a Saudi-led rift.

The pair discussed developing cooperation "in various fields, especially in the energy and agriculture sectors", and in trade and investment, "particularly the flow of Qatari investments towards Egypt", the statement added.

In late March, Cairo said the gas-rich Gulf state would be investing $5 billion in Egypt.

At the same time, Qatari hydrocarbon giant QatarEnergy announced an agreement with ExxonMobil to acquire a 40 percent stake in a gas exploration block off Egypt in the Mediterranean.

No new agreements were announced during the emir's two-day trip, which concluded Saturday and was his first to Cairo since 2015.

After relations between Egypt and Qatar were restored in January 2021, Sisi and the Qatari emir had only met twice, both times on the sidelines of summits abroad.

Egypt had joined Saudi Arabia and its Gulf allies the United Arab Emirates and Bahrain in breaking off relations with Qatar in June 2017, citing its support for the Muslim Brotherhood and alleged soft line on Iran.

The Islamist group was founded in Egypt in the 1920s before spreading through the Arab world.

The Egyptian government banned the Brotherhood in 2013 following the overthrow of president Mohamed Morsi, who hailed from the movement.

According to Egyptian presidency, the emir also "praised Egypt's ongoing efforts on reconstruction in the Gaza Strip".

Doha and Cairo -- key US allies in the Middle East -- have both provided reconstruction aid to the territory and have been involved with mediation efforts between Israel and the Gaza Strip's Islamist rulers Hamas.

The two leaders also welcomed next month's Gulf Cooperation Council summit in Saudi Arabia that will also be attended by the leaders of Egypt, Jordan, Iraq and the US, the presidency statement said.

Saudi and Egyptian companies signed agreements worth a total of $7.7 billion during the visit, state media in both countries said.