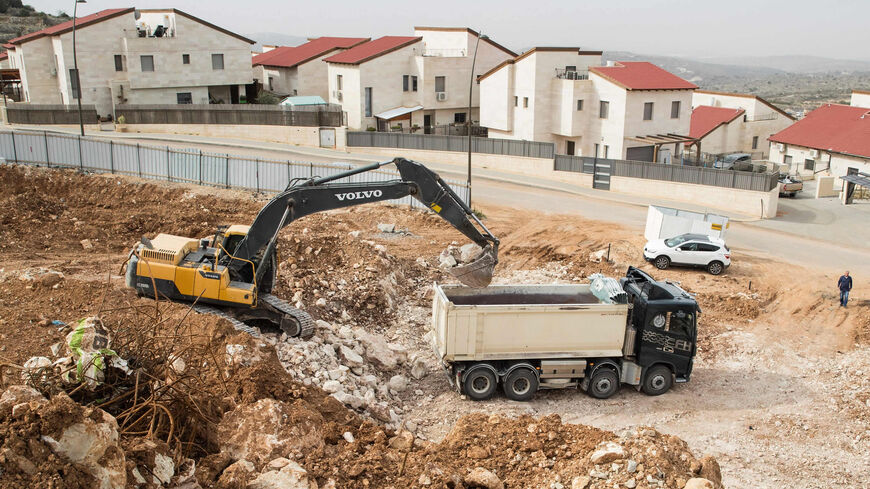 Palestinian laborers work at the construction site of a new housing project in the Israeli settlement of Ariel near Nablus, the West Bank, Jan. 25, 2017. - Jack Guez/AFP via Getty Images

Israeli press reported June 15 that authorities intend to increase by 20,000 the number of work permits issued to West Bank Palestinians wishing to work inside Israel. Currently, some 100,000 Palestinians from the West Bank hold such permits.

On June 16, Coordinator of Government Activities in the Territories (COGAT) Gen. Ghasan Alyan announced that following an assessment of the security situation, the minister of defense decided to increase by 2,000 the number of permits for Gaza Strip residents to work and do business in Israel. The total number of permits for Gaza residents to enter Israel for economic reasons will add up to 14,000. In his announcement he noted that all of the civil steps toward the Gaza Strip are conditioned on long-term security stability, and their expansion will be examined by assessing the situation.

These decisions toe in line with the government’s policy of improving the economic situation of Palestinians in the West Bank and in Gaza, especially after a year of relative quiet on the Gaza border. But the timing of the decision is also related to the expected visit in Israel next month of US President Joe Biden.

This week, Assistant Secretary of State for Near Eastern Affairs Barbara Leaf and her deputy Hady Amr visited Israel and the Palestinian Authority (PA). The two made the journey between Jerusalem, Tel Aviv and Ramallah in order to meticulously prepare Biden’s trip.

Reportedly, Palestinian President Mahmoud Abbas and Civil Affairs Minister Hussein al-Sheikh made their demands for the conduct of the visit and for the diplomatic and economic results they expect from it, including ending Israel’s opposition to give aid money to the PA.

Likewise, the Palestinians demanded a package of economic gestures, including relief in imports and exports from the Palestinian territories, more passage permissions to enter Israel for Palestinian merchants and businessmen, as well as a symbolic step of allowing the presence of PA officials at the Allenby Bridge border crossing with Jordan.

Israel has opposed a similar step in the past during the negotiations over the Oslo Accord, with its firm position that full Israeli control must be maintained over border crossings for security reasons. Reportedly, Prime Minister Naftali Bennett is currently reviewing the request, with a few options proposed by the Defense Ministry. Still, reports say he is unlikely to approve such a change.

While opposing any moves that could signal change of sovereignty, Bennett seeks to take steps that will improve the Palestinians’ economic situation. Foreign Minister Yair Lapid will soon bring before the diplomatic-security Cabinet a plan for a series of additional economic steps, including increasing authorizations for export from the West Bank, and relief in the conditions of standardization and commerce, as well as an increase in the number of permits to work in Israel.

At a press conference June 15 Lapid said that the goal is to improve the quality of life in the Gaza Strip, a step that will help calm the region and reduce tension.

The plan includes an authorization to advance infrastructure projects, foremost among them a desalinization plant. The European Union has allocated tens of millions of euros for this in a new aid package for the Palestinians. Other steps Israel plans to take include increasing the number of work permits for Palestinians, increasing exports from the Gaza Strip, laying a gas pipeline for the new power plant and advancing the rebuilding of an industrial zone at Erez. The package is supposed to be authorized by the Cabinet, and it will be presented when Biden visits Israel.

As mentioned, increasing the number of work permits to Palestinians is part of the government’s ongoing policy since its establishment; some of these gestures are part of the ongoing Israeli policy measures since the government was established. The announcement by the COGAT on the additional 2,000 work permits for Gaza Palestinians is part of a proposal by Defense Minister Benny Gantz, already approved by the government, to increase the number of workers from Gaza to 20,000, i.e., 6,000 more permits will be granted in the coming weeks.

Regarding the West Bank, Israel plans to grant an extra 20,000 work permits next week. The number of these permits will thus increase to 120,000, most of them in the fields of construction and agriculture.

According to reports, the idea is to increase the number of workers entering Israel with a permit in a supervised manner, and to reduce the number of illegal workers, i.e., workers who enter without a permit and work in Israel. Each Palestinian worker who enters Israel with a permit undergoes a process of security authorization by the security establishment in order to monitor workers entering Israel.

In the last wave of terrorist attacks in March and April, where Palestinians and Arab Israelis killed 19 Israeli citizens and injured dozens, Palestinian workers with permits were either prevented from coming to their workplaces or preferred not to arrive. In a few of the cases, Israeli mayors prevented the entry of workers, allegedly in order to give residents of their cities a sense of security.

The Israel Builders Association rejected this phenomenon at the time, claiming that Palestinian workers who are permitted to work in construction and infrastructure are scrutinized by the security establishment before receiving a work authorization. These are skilled workers who come to work every day in Israel in order to make a living.

The economic significance of increasing the number of Palestinian workers is great. The average salary of a skilled Palestinian worker in Israel is 6,000-7,000 Israeli shekels ($1,740-$2,030), three times more than the average salary in the West Bank. The combined salaries of the 140,000 workers from the West Bank in Israel (100,000) and the settlements (40,000) come to nearly a billion shekels ($290 million) a month and feed the Palestinian economy. In the Gaza Strip, which suffers high unemployment, the salary of workers who work in Israel is six times more than the average salary (according to data from the civil administration).

Does the equation of economy in exchange for quiet and security in Gaza that Lapid announced in September 2021 work? It’s not clear that the quiet stems from the improving economic situation, but it is a fact that since June 2021 there have been very few incidents involving the Gaza Strip.