Now that its miltiary operation has ended, Israel is continuing and expanding measures that will help Gaza’s economy grow. 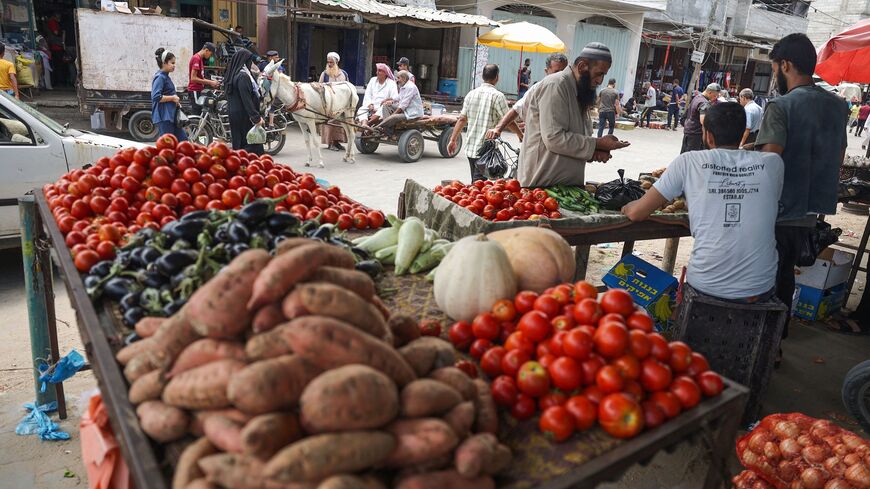 Palestinians buy fresh produce from street stalls in Rafah town in the southern Gaza Strip on Aug. 8, 2022, as a truce with Israel holds following three days of conflict. - SAID KHATIB/AFP via Getty Images

In the latest round of violence between Israel and the Islamic Jihad in the Gaza Strip, economic concerns were clearly among the main reasons Hamas didn’t join the fighting. Now, Israel intends to follow through on certain economic relief measures for Gaza Strip residents.

Prime Minister Yair Lapid said in televised comments Aug. 8, “I want to turn from here to the residents of Gaza and tell them: There is another way. We know how to protect ourselves from anyone who threatens us, but we also know how to provide work, livelihood and a life of dignity to anyone who wants to live in peace by our side. There is another way to live. The path of the Abraham Accords, of the Negev Summit, of innovation and economy, of regional development and joint projects. The choice is yours. Your future depends on you.”

Israel has taken two approaches toward the Gaza Strip in the past decade. In the security approach, Israel limited imports to Gaza for fear some materials would be used for military purposes, has delayed various international projects because Hamas sought to control them and prevented emissaries of the Palestinian Authority from working. Until a year ago, it also prevented the entry of Palestinian workers into Israel. Another approach derives from the belief that economic relief for Gaza residents will reduce motivation for Hamas to start a military conflict with Israel.

In the past year, under the Bennett-Lapid-Gantz government, the economic approach has gained ground and significant economic relief measures began a little less than a year ago.

First, Israel allowed thousands of Palestinians to enter Israel for work for the first time since 2006. Until that point only several hundred businessmen could enter Israel on a special permit. The new permits initially allowed 8,000 workers, then 12,000 and two months ago the number increased to 14,000.

The measure's economic significance for the Gaza Strip is tremendous. According to data provided to Al-Monitor by the Coordinator of Government Activities in the Territories (COGAT), a worker from Gaza can earn 6,000 shekels ($1,850) a month and more in Israel compared to only 800 to 1,000 shekels ($240-300) in the Gaza Strip. The unemployment rate in Gaza is over 50%, according the Palestinian Central Bureau of Statistics. Thus, each salary can provide the livelihood of an entire extended family. The monthly income for the Gaza economy from workers’ salaries in July, when about 14,000 workers worked in Israel, reached 84 million shekels ($25.7 million), about a billion shekels annually. These workers lost a week of work, a quarter of their monthly salary, and pressure from them was one of the reasons Hamas sat out the fighting.

Since fall 2021, Israel has allowed goods to enter Gaza that were previously prohibited and allowed the export of more agricultural produce than in the past. COGAT data shows that annual exports from Gaza have been on a sharp incline since then. Dozens of new factories have opened and unemployment has declined.

Still, unemployment remains rampant in Gaza, and Hamas needed the wheel not to be turned back. Israel's cutting of fuel deliveries to Gaza’s power station put additional pressure on Hamas. Border crossings between Israel and Gaza were closed and on Saturday, at the height of the fighting, power station administrators announced that electricity would be limited to only four hours a day.

Not everyone agrees that economic pressure is the answer to security escalation. Israeli researcher Michael Milstein says that if it were really so significant, Hamas would have prevented Islamic Jihad from escalating the conflict in the first place. The economy moderates but does not prevent ideological escalation, he concludes.

Still, the Israeli leadership is counting on Hamas to stay out of conflict to avoid a harsh economic impact on the population it governs. A senior Israeli diplomatic official told Al-Monitor on condition of anonymity that following the cease-fire and the end of the operation, “There’s opportunity in the day after and Israel does not want to miss it.”

The Israeli government, said the source, estimates that an opportunity has come for a longer-term arrangement with Hamas based on civil measures. Of course, it also means giving up at least temporarily on ousting Hamas from Gaza and accepting the constant strategic threat from the Strip.

According to the same official, Hamas received warnings from Israel via Egypt regarding economic issues both during the fighting and after the cease-fire: Escalation means a halt to economic relief. However, Israel also offered to expand relief and advance several infrastructure initiatives.

Among these initiatives is a plan to run an electrical line from Israel to Gaza and also ensure a gas supply, as well as the advancement of the large desalination plant to address some of the drinking water shortage in Gaza and the renewed operation of the industrial zone at the Erez checkpoint. In the short term, Israel is expected to raise the number of Gaza work permits to 20,000 for workers who pass extensive security checks.

Cairo has also promised to facilitate border crossing procedures in Rafah and participate in regional initiatives.