Amid increasing unemployment rates in the Gaza Strip, youth have warmly welcomed an agreement between the Palestinian and Qatari governments to employ 20,000 additional Palestinians in Qatar. 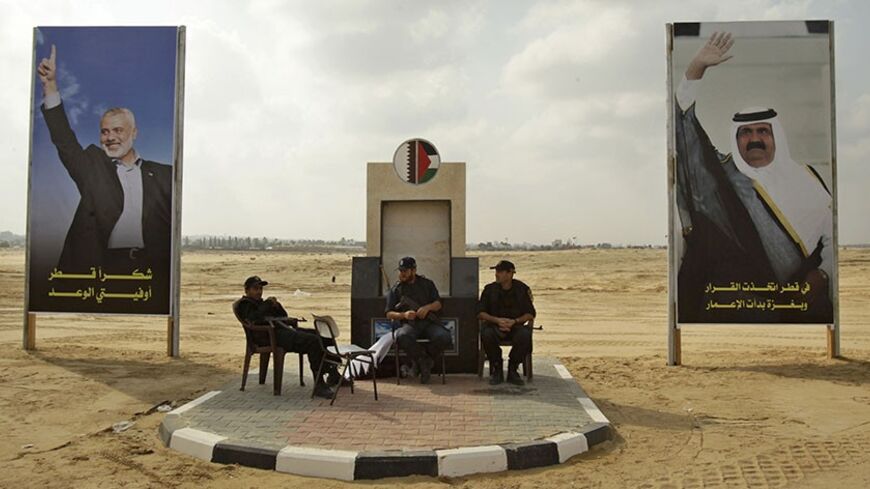 GAZA CITY, Gaza Strip — Ahmad Rafic did not hesitate to register his name on the list of people applying for work in Qatar, following the Palestinian Ministry of Labor’s announcement that Prime Minister Rami Hamdallah had signed an agreement with the Qatari government allowing 20,000 Palestinians to work there once again. Meanwhile, some youth in Gaza criticized the agreement, saying it was a way to empty Palestine of qualified workers and avoid their demands of improving the Palestinian economy.

Rafic, 30, has been working as a civil engineer for the past 2½ years under fixed-term contracts with the UN Relief and Works Agency for Palestine Refugees in the Near East (UNRWA). But UNRWA’s shift toward reducing the scope of its activities in the Gaza Strip for financial reasons has Rafic worried, since it would deprive him of his only reliable employment.

“I may never find another opportunity like this. Jobs are scarce, unemployment rates are high, construction materials are scant and the number of unemployed engineers is greatly increasing in the Gaza Strip. Qatar seemed like a golden opportunity for me. I hope to get a good job offer there,” he told Al-Monitor.

The Ministry of Labor announced on Jan. 14 the signing of an agreement between the Palestinian and Qatari governments for the recruitment of a 20,000 professional and specialized Palestinian labor force to work in Qatar that would be added to the already estimated 20,000 Palestinians who have been working for years in the Gulf state.

On Jan. 23, Labor Minister Ahmed Majdalani said, “The responsibilities of the Ministry of Labor, in the efforts aimed at increasing the number of Palestinian workers in Qatar, revolve around establishing an electronic link between the Palestinian and Qatari labor ministries, to facilitate and expedite procedures.”

In a statement to the official Palestinian News Agency (WAFA), he added, “The Ministry of Labor has begun accepting electronic applications on its website’s labor market information page. These included submissions from various social groupings in the West Bank, Gaza and the Palestinian diaspora. Further technical arrangements have to be put in place, which the Palestinian ambassador to Qatar is working on.”

Many unemployed young people from the Gaza Strip and the West Bank rushed to register online on a site set up by the Ministry of Labor, searching for suitable job opportunities in Qatar. These opportunities became the focal point of discussions among Palestinians, particularly the youth, in light of the great frustration engendered by the prevailing economic restrictions and current political circumstances.

The announcement made about those jobs led to an intense intra-Palestinian debate. While thousands rushed to register, some criticized the step, considering it an attempt to “transfer Palestine minds and workers from Palestine to Qatar,” as Mohamed al-Noueizi, a Palestinian youth, told Al-Monitor.

According to official statistics issued by the Palestinian Central Bureau of Statistics, the overall unemployment rate reached 23.7% in 2013, topping out at 19.1%  in the West Bank and 32.5% in the Gaza Strip. Unemployment among young people and new graduates (aged 20-24) reached 43.1%, and rose to 49.9% among the female population.

The Palestinian Ministry of Labor tried to face criticism leveled against it for allowing young people and workers to go to Qatar by issuing a statement on its website. “The Palestinian labor market can absorb 64.3% of the workforce (in the public and private sectors combined). Regulated and unregulated labor working in Israel accounted for 11.6% of the workforce, while the percentage of registered workers abroad amounted to 0.4%. The Palestinian economy’s ability to generate new employment opportunities is very limited, in light of the current political and economic circumstances. All outlooks indicate that the Palestinian economy is unable to generate more than 15,000 new job opportunities per year at best; at a time when newcomers to the Palestinian labor market exceed 40,000 new workers, most of whom are graduates of Palestinian universities and educational institutions.”

Some professionals expressed their unbridled desire to go to Qatar.

“I learned about the Qatar job opportunities through a friend. Immediately, I felt that there was a glimmer of hope for me to put an end to my days of unemployment, which started when I finished my studies and received my diploma in accounting. Three years have passed since my graduation without being able to find a steady job. In the best of cases, I am able to work for one or two days a week,” said Khaled al-Farran, 24.

Nidal al-Shawa, 23, is a high school graduate who works at a restaurant owned by one of his relatives for 35 shekels per day ($10), part of which goes to help his father support a six-member family. For him, a job in Qatar would allow him to plan for the future. He told Al-Monitor that the limited salary he receives in Gaza, in light of the high prices and the responsibility which he shoulders, would not permit him to put aside any money toward his eventual marriage, even if that were to occur 10 years from now.

The Gaza Strip is suffering from a difficult economic situation because of the Israeli blockade imposed following Hamas’ takeover of the Gaza Strip. This raised the level of unemployment, which was relatively reduced for two years while smuggled goods from Egypt entered the Gaza Strip through the tunnels. But, the situation reverted when the Egyptian army closed down those tunnels after President Mohammed Morsi was removed from power.

Indeed, the prevailing economic and political squabbling, the restrictions imposed on travel, the rise in unemployment and the increase of psychological disorders have all prompted thousands of young people to not think twice about insisting on registering for a chance to get a job in Qatar.

In this context, engineer Rafic said, “I am not looking for luxury. All I want is to be able to provide a life of dignity and a better economic future for myself, my wife, my 3-year-old daughter and 1-year-old son.”