With the unemployment rate steadily on the rise in the Gaza Strip, many college graduates are taking and creating jobs outside their specialty. 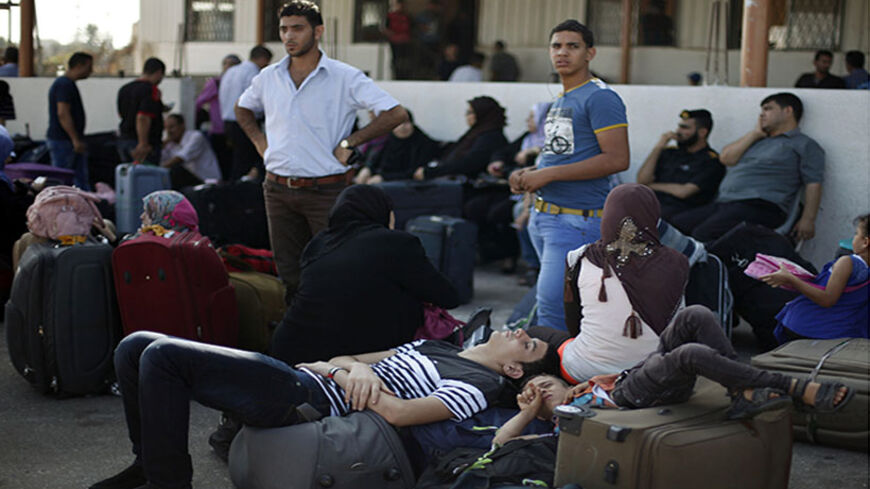 Palestinian youths take a nap as they wait with other passengers to cross into Egypt at the Rafah border crossing in the southern Gaza Strip, Aug. 12, 2013. - REUTERS/Ibraheem Abu Mustafa

GAZA CITY, Gaza Strip — Yasser Harara, a 25-year-old engineer, failed to make it to the final-round selections at the Gaza Startup Weekend held June 19 and co-sponsored by the Palestinian Telecommunication Group (Paltel), Google and other organizations. Startup Weekend bills itself as “54-hour events where developers, designers, marketers, project managers and startup enthusiasts come together to share ideas, form teams, build products and launch startups.” Harara presented a project about exchanging business cards via mobile phones. He did not lose hope after his project wasn't selected and in the end joined one of the winning projects as an assistant.

“I graduated two years ago, but I haven't found a suitable job. I presented this project today to try to get out of unemployment, but luck was not on my side. I did not get the required number of votes to be selected,” Harara said.

Alaa Sakr, who works in Google's technical development group in the Gaza Strip, spoke with Al-Monitor during the forum. He said, “There are 160 men and women who participated in the forum and presented innovative ideas and projects that combine technology and public services. Most of the participants are young graduates who do not have job opportunities.”

Although Harara and his friends were able to find their way to Google to present their projects, this was not the case for thousands of others who are struggling. Mohammad Helou, 24, sells falafel and corn on the streets to make money to feed his family of seven.

“I can make 20 shekels [$6] a day,” Helou said, discussing serving corn to customers on Tel al-Hawa Street. “But corn is only sold during the summer season. This is why I spend the rest of the year selling falafel at the store of my older brothers, who are married and have their own concerns.”

Helou studied journalism at Al-Azhar University. After volunteering at several media websites, he lost hope of finding a job. He said, with a look of sadness in his eyes, “I love photography and journalism, but when I worked in this field, I was volunteering. So I put my camera away and started working in the restaurant business.”

Yasmin Naim, 28, graduated six years ago but could not find a job. She therefore decided to sell accessories and perfumes. She did not own a shop, so she came up with the idea to sell her products in restaurants and cafes.

Standing in front of her products, Naim told Al-Monitor, “I paid $120 to display my accessories and perfumes in one of the famous cafes in Gaza, and I only got $20 back after selling a few bottles of perfume. I would rather work in this kind of a job than an official one, which I will not find or will not be adequate.”

Ahmad Nasser, 27, got an average score of 80% for his bachelor's degree in mathematics from Al-Aqsa University, but he also has not been able to obtain a job in his field. Instead, he began selling goods in a shop after he lost hope of any improvement or change in the job market in light of the Gaza-West Bank reconciliation and formation of a national unity government.

“The situation will not change and no one will pay attention to us young people. Every day that passes by, we find ourselves in a catastrophic situation. I graduated four years ago, and when I apply for a job as a math teacher, I find 30,000 to 40,000 other applicants in front of me,” Nasser said.

According to a report by the Palestinian Central Bureau of Statistics, 30,000 students graduate each year from Palestinian institutions of higher learning. The bureau and a Sharek Youth Forum report indicate that people between 15 and 29 years of age constitute 29.9% of the total population of 4.42 million in Palestine. The unemployment rate among graduates was 52.5% in the first quarter of 2013, and 37% of graduates are economically active. The report also showed a positive correlation between the rise in education levels and the increase in the unemployment rate.

As shown here, a number of graduates have turned to alternatives to cope with unemployment, which is spreading among Gaza's youth. For instance, media and sociology activist Alaa al-Malfouh created the blog Opportunities, which launched in 2011 to facilitate job searches for youths by compiling trusted job offerings from various resources such as youth institutions, official websites, companies and local newspapers. The offerings are published for free and are easily accessible, Malfouh said.

“The website receives between 10,000 to 20,000 visitors per day looking for vacancies. The number of visitors from Gaza ranges between 8,000 and 15,000 per day,” said Malfouh, who also revealed that the website has hundreds of success stories. Opportunities is now the number one reference for job searches in the Gaza Strip.

Mohammad Hasna, an expert on youth and development, is not surprised by the depression among Gazan youth. He wondered aloud, “How could a national unity government not include the youth in its formation or even in the reconciliation negotiations?”

Proposing solutions to the unemployment crisis, he told Al-Monitor, “The temporary program in the state institutions active in Gaza should be unified, and the work should be directed toward realizing the development plan drawn up by the Palestinian government. In addition, the early retirement age should be reduced to create vacancies in the government, while job opportunities should also be created in the foreign market through international agreements with the unity government.”

Hasna asserted that the educational process is in need of restructuring to focus more on developing vocational and technical education. In addition, students should be sent abroad in promoting excellence in specific specialties to meet requirements of the local and international markets.

Mamoun Abu Shahla, minister of labor in the new government, has a long-term vision. He told Al-Monitor, “In the former Ministry [of Labor] there were two programs aimed at encouraging the employment of graduates. The program had included a large number of graduates and created 6,000 opportunities, although they were temporary jobs. At that time, capacities were limited, but today we are expecting more capacity, which is why we are working on creating non-temporary programs. However, these plans are for the future since it requires time and opening the crossings, which will not happen in the next few months.”

Shahla explained the background of the current crisis. The political division between Hamas and Fatah played a central role in the decline of the economic situation in Gaza, on top of the Israeli occupation. Shahla asserted that economic recovery can only emerge “if construction materials were allowed back. This alone would create 50,000 to 100,000 jobs.” He confirmed that 300,000 new job opportunities are needed in the areas controlled by the Palestinian Authority.

The feelings of frustration among young people are hard to escape, with so many remaining pessimistic about the future of the Gaza Strip despite the reconciliation deal. Mohammad Mansour and Ousid al-Masri, both 18, have both recently graduated from an American school and are waiting for an opportunity to travel and study at Istanbul University. The two young men agreed that they would leave Gaza City, which they consider a city that has chased its youth away. Sitting on the edge of a fountain in a park, they said, “The new government will be no different than former governments in ignoring us and the youth."