Young professionals in the Gaza Strip use local and international online freelancing platforms to find job opportunities and a steady source of income. 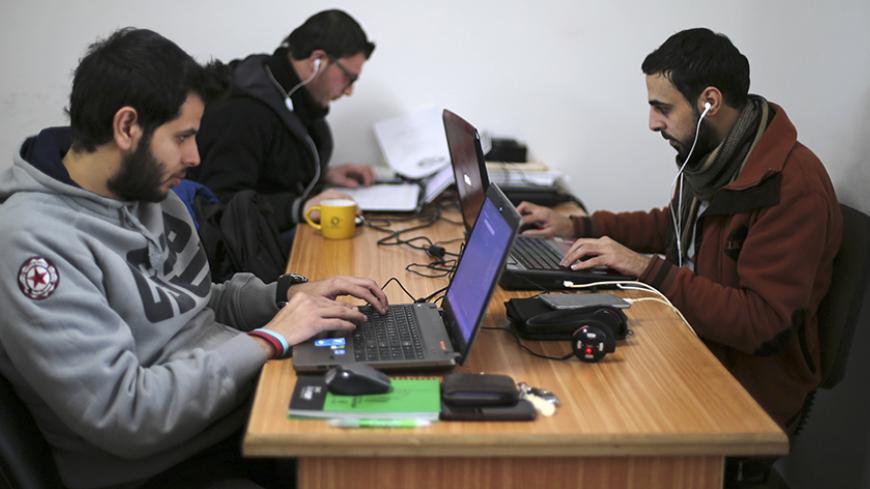 GAZA CITY, Gaza Strip — Online freelancing platforms are a major source of income for young professionals in the Gaza Strip who are freelancing in different fields via websites that connect them with potential clients from around the world. These websites present an alternative to the local labor market, where the unemployment rate is skyrocketing. In light of the continuation of the Israeli blockade on Gaza for the ninth year in a row, these platforms may have turned into a permanent solution to unemployment.

Since the start of the blockade in 2007, the number of university graduates in Gaza has increased to 30,000 a year, according to the Palestinian Central Bureau of Statistics, while unemployment rates have risen. These young graduates are part of the highest registered unemployment rate in the world, which soared to more than 60% at the end of 2014. According to a World Bank report issued in May, this number stood at 34.8% during the first quarter of 2006, i.e., before Hamas took control of Gaza.

Young Gazans are trying to create temporary employment opportunities to escape the clutches of poverty by all means available. Every day there is a new way and a job opportunity created by these young professionals.

After failing to find employment opportunities in the local market, Hamdan Abu Taima, 30, has been developing and designing professional websites and electronic systems for companies since 2008, via numerous international freelance platforms, such as Upwork (formerly oDesk), Freelancer and Elance, and regional freelance platforms, such as Mostaql and Nabbesh, to the point that these freelance jobs became his primary and only source of income.

Abu Taima was not convinced of the usefulness of a university education in finding a job, so he decided to improve his skills in website development and became a professional developer. He told Al-Monitor, “I was not interested in obtaining a university degree. I majored in pharmacology and then I changed major and chose engineering. I ultimately decided to drop out of university since I found it useless in light of the blockade. I decided to focus on the job that I actually like, which is website development.”

He said, “After improving my skills in website development, I decided to channel my knowledge into something useful. I started developing websites for local institutions in 2003. When I started working as a freelancer, my work became more professional and creative.”

Abu Taima added, “No one was convinced that freelancing could be successful. I spent long hours negotiating job offers. Even my family was not convinced of the first job I took in icon design, as I got paid $5 only per bid. But this was the beginning of my successful career in this field. After five months, I built a good resume through these freelancing platforms as well as a solid network of relations with distinguished clients. My offers increased in number and in price and became a good source of income.”

He said that in many cases his work exceeded the scope of these platforms. “My work is no longer limited to these platforms. There are many clients who search for my profile on social media and ask me to carry out work for them outside those platforms to avoid paying the commission and [circumvent] the payment methods imposed by those websites. I also train many interested job seekers on the basics of freelancing via these platforms.”

Mercy Corps in Gaza, an international organization for development and humanitarian work, is training graduates from various disciplines on the basics of freelancing to help them find work and alleviate the unemployment crisis.

Taysir Shaqliah, information technology programs director at Mercy Corps in Gaza, told Al-Monitor, “Since 2011, we have been training graduates in freelancing. We resorted to freelancing professionals to provide the training and we established a freelancing academy. We also provided trainees with financial aid for a short period to allow them to start working and accepting offers.”

He said, “We started training 86 graduates at different times. We estimate that currently there are more than 300 freelancers in Gaza working via international [online] platforms. Each trainer at Mercy Corps tries to involve more [people] on these platforms.”

“Despite the absence of official statistics, the Facebook group Baddak IT Man [You Need an IT Man] allows professionals to exchange job opportunities, experiences and announcements. This Facebook group is seen as Gaza’s freelancing platform, and around 2,700 professionals from among those providing freelance work to local companies have joined it. The number of freelancers seems to be increasing when we look at the group,” he added.

Afnan al-Hayek, 29, is one of Mercy Corps freelance training program graduates. She told Al-Monitor, “Working with platforms for freelancers requires a lot of patience and hardship, but the upside is that it provides an opportunity for graduates to work in their field of specialization no matter how diversified. This is a trait that is not available in the local labor market. The graduate has two options here: either to face unemployment or to accept low-paid jobs in other fields.”

Hayek holds a bachelor's degree in French and English from Al-Azhar University in Gaza City. She works as a writer and translator via freelancing platforms. Over the years, she has developed her career and has worked as a program director, project coordinator and journalist. Hayek reported the events of the 2014 war in Gaza to press agencies that looked for journalists and authors via oDesk.

“I got a job offer through oDesk to work with a foundation seeking to set up an office in Gaza. I became the foundation project official and implemented a project for the distribution of schoolbags and aid to children in 2015,” she said.

The Upwork platform is popular among young professionals because of its flexible terms and conditions compared to other platforms. After four months of training, engineer Suhair Abu Nehme, 27, started freelancing via this platform, giving her a steady source of income.

In addition to freelancers having to be patient to establish their networks and find projects, in Gaza they are affected by electricity outages on a daily basis. “We are forced to find alternatives to charge our computer batteries and stay connected to the Internet, such as using battery chargers. Since we may receive work via these platforms at any time, we bear the cost of power outages that last for 6 to 8 hours every day in Gaza,” Abu Nehme said.

In regard to project payments, Abu Taima said that there are restrictions on the Payoneer card, which freelancers use to transfer their payments from the platform they work for to the card itself. He explained that after the money is transferred to the card, the local ATMs have set a $200 limit for withdrawal at a $7 commission per transaction.

The success stories of Abu Taima, Hayek, Abu Nehme and others have motivated many young professionals in the Gaza Strip to join international freelancing platforms and to expand their professional network outside those websites.

As young professionals in Gaza are enduring exceptional economic and political circumstances that do not provide any other opportunities, these freelancing platforms may be their only hope for a job.