Gazan women surge ahead with startups

Young, educated women in the Gaza Strip are among the most likely to be unemployed in an area where nearly half of people are out of work, as many of these women are now turning to business incubators to find funding and support to build their own businesses. 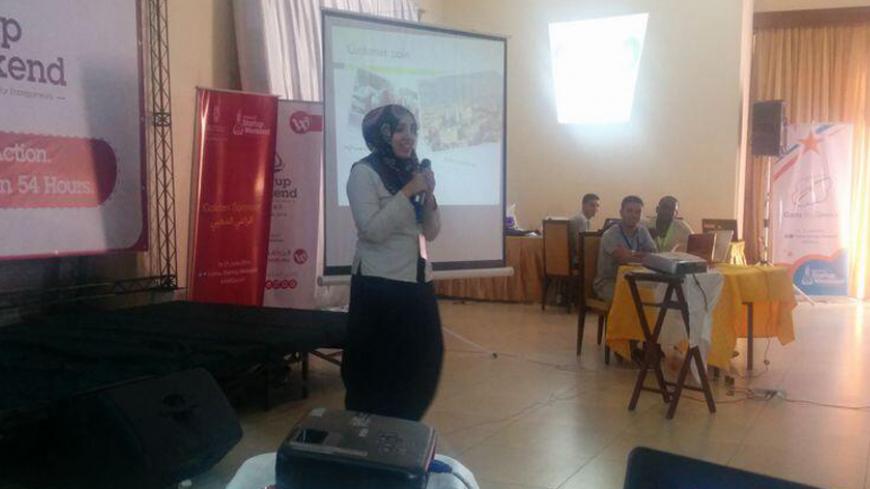 A participant of the Gaza Startup Weekend is giving a presentation on her startup in the Gaza Strip, June 21, 2014. - Twitter/@SWGaza

GAZA CITY, Gaza Strip — The unemployment rate among Palestinian women in the Gaza Strip has risen in the last decade. A sharp rise was witnessed after Israel imposed a blockade on Gaza in 2006, making it difficult for many Palestinians to secure jobs. However, business incubators such as the one at the Islamic University of Gaza have provided pioneering women with the chance to start their own independent projects, making them leaders in the world of business, namely in the technology field.

Rana al-Qirnawi, 25, did not wait for her graduation from university to arrive at the bitter reality that she would not find a job, despite her creative capabilities in computer engineering. Qirnawi believed in her abilities and started searching for funding for her idea to establish a specialized company in web development. It was then launched by one of the business incubators in Gaza.

Today, after having won the contest for the business and technology incubator at the Islamic University of Gaza, Qirnawi has become the manager of Genius Soft, a company for web development and programming, smartphone application production and online statistical and research projects.

“The Islamic University incubator contributed to financing my idea. Today, six people have been hired for our project and sometimes, when needed, we provide part-time jobs for other people,” Qirnawi told Al-Monitor.

“The information technology domain has provided us with a chance to challenge the blockade imposed on the Gaza Strip, as we use our engineering capabilities and creativity to develop the work of large business companies that are based outside Gaza. This is done through the development of different customized programs and designs via the Internet,” she said.

Qirnawi added, “This work provides us with an entire salary, instead of fixed-income jobs that are difficult to secure, because of the lack of job opportunities due to unemployment in Gaza.”

Qirnawi, like hundreds of other young women (although no official statistics are available), turn to business incubators in the Gaza Strip to transform their ideas into projects for entrepreneurs, including newly graduated creative young women in their respective fields.

Women in the Gaza Strip, like men, suffer from the scarcity of job opportunities as a result of the blockade. According to the Palestinian Central Bureau of Statistics, during the fourth quarter of 2014 the unemployment rate for both men and women in the Gaza Strip stood at 42.8%, and the highest rates were recorded for those ages 20-24.

Young women who have completed 13 years of schooling have the highest rates of unemployment, in 2014 rising to 47.1% of the total number of women of working age in this category.

Researcher Basma Barhoum conducted a study in 2012, which was not published in the media, on the role of business and technology incubators as a tool to solve the problem of unemployment in Gaza, which earned her a master's degree in development economy from the Islamic University in 2015. According to the study, business incubators have served as a main factor for providing job opportunities for entrepreneurs, mostly women, as they are more likely to apply for financial aid, to start their own projects.

According to Barhoum, there are no more than five business incubators in Gaza, including the most important one at the Islamic University, which was established with support from the World Bank. The Islamic University receives 1,000 ideas annually from Gazan entrepreneurs. This is in addition to business accelerators recently launched by international institutions in the Gaza Strip — such as the Gaza Sky Geeks accelerator, launched by the Mercy Corps.

In her study, Barhoum focused on the Islamic University incubator, where the incubated technology projects have reached 61%, the services projects 41% and industrial projects 11% — a percentage of more than 100% of the total incubator projects, as there have been many projects working in more than one domain.

“The technology projects rate is on the rise, as these projects depend on young people’s capabilities to design and develop applications, which does not necessitate the opening of crossings, or the entry of certain needed products as a result of the blockade imposed on the Gaza Strip,” Barhoum told Al-Monitor.

The participating companies that emerged based on incubator universities belong to different industries, with companies from the local domain constituting 40.5%, regional companies 10.1% and international ones 14% from the total incubator projects. Also 35.4% of the total number of companies took part in projects in various domains,” she added.

According to Mohammed Skaik, the director of the Business and Technology Incubator at the Islamic University, “Projects by female entrepreneurs constitute about 53% of the incubated projects, and have been the most successful among the work of young people.”

“Female entrepreneurs remain steadfast throughout the completion of their projects and thus yield greater successes than young men. The government job opportunities are limited given the economic and political situation. Meanwhile, the private sector mostly hires men as it entails difficult jobs,” he told Al-Monitor.

“The incubator has funded 73 projects since 2012 among the thousands of ideas received every year. Projects have been provided with amounts ranging between $3,000 to $10,000 per project, which was enough for a pioneering idea to turn into a project making business on the market,” he added.

This accelerator receives most of the projects that started in the Islamic University incubator, in addition to other projects from the private sector and other entrepreneurs, preparing them to make a strong entry into the market.

Saeed Hassan, the Gaza Sky Geeks program manager, told Al-Monitor, “The business accelerator has funded four startup projects in the past few years with $30,000 for each project. The accelerator’s role is also focused on promoting projects within international investment networks.”

He added, “Women participating in the business accelerator constitute 50%, while 25% of projects that secure funding are run by young women.”

While Qirnawi managed to receive funding for her project after interviews with Gaza Sky Geeks, and is still waiting to advance after her first submission was rejected, Maryam Otaiwi, 25, was the first woman to receive funding from the business accelerator for her project called "Wasselni’" (Drive me). The project allows you to share information on transportation services and to book taxis through a mobile application and a website. It allows clients to effectively share data on transportation services in cities such as Cairo, Gaza and Amman.

Otaiwi has been chosen as one of the top 25 startup companies in the Arab world in the competition, which was held at Zayed University in the United Arab Emirates, to be the first pioneering step in technology in Gaza on the international path.