Faced with rampant unemployment, talented young Gazans are creating their own innovative projects with no official funding and support. 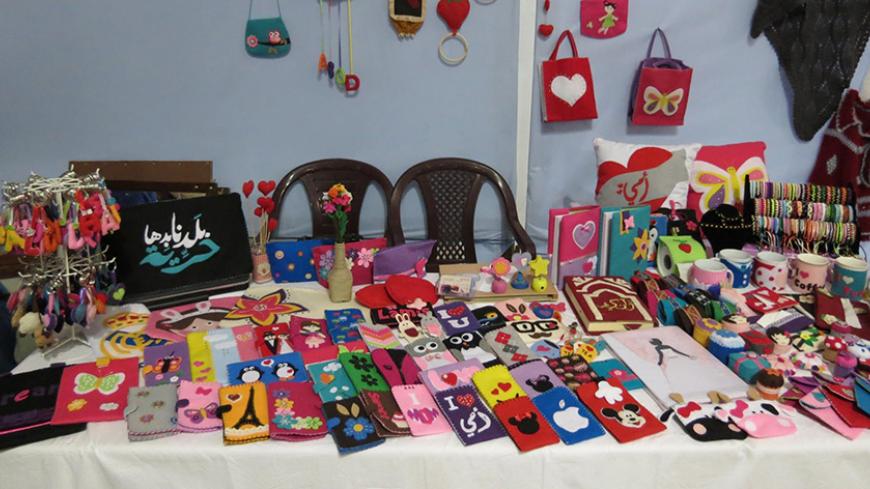 The Ebra.Khet stand is seen at a show organized by the Women's Affairs Center, Khan Yunis, Gaza, March 16, 2015. - Ebra.Khet

Starting a small business can be difficult even under the best circumstances. Imagine giving it a go in an environment wracked by wars, under a blockade, in the absence of financial and logistical support from the government and the private sector, and with limited marketing opportunities.

Both the Gaza Strip's government and nongovernmental organizations are financially ill-equipped to protect or promote projects initiated by Gazan youth. Gaza's already weak economy is collapsing, according to Palestinian news agency WAFA. Yet some young Gazans are working to get their ideas off the ground, launching many creative projects and websites.

Amani Sharqawi launched a needlework project on Facebook and Instagram in 2012. She called it Ebra.Khet, Arabic for "Needle and Thread." Sharqawi, like most young Gazans, was struggling in the rising unemployment rates in Palestine. Four out of 10 young people in Gaza are unemployed, according to the latest report from the Palestinian Central Bureau of Statistics, issued Aug. 12.

Sharqawi came up with the idea for the unconventional project after designing her own laptop cover. “I created the cover with a quality fabric that I liked and I put some designs on it. When people started complimenting it, I figured this would be my project,” she told Al-Monitor.

She first started making the covers, then opened a Facebook page and began expanding her work. “The page received broad acclaim, since I was using good-quality fabric and colorful, creative designs," she added. She participated in needlework exhibitions and began photographing her products, gaining a reputation as a product photographer as well.

But winds do not always blow as vessels wish, and the blockade eventually affected Sharqawi’s project. She noted, “The closing of the crossings is my main issue and I can no longer find the main fabric that I use, which affected my production, and I had to delay many customers’ orders.”

She pointed out that in the absence of financial support for her project, she had to rely on herself and her family. She hopes to develop her own workshop and adopt modern methods to print her designs on fabric.

The blockade threatens to drown Gazans in everyday problems. But some have shifted their focus beyond the borders and turned to cyberspace to reach the outside world.

Assid Madi and Mohammed Almadhoun created Baskalet Game Studio using their graphic design skills to build their dream of designing games. They began their venture in May 2015, when they became involved with the startup accelerator Gaza Sky Geeks, which hosted them in its headquarters. From there, their project surpassed expectations.

He explained that they could not have reached their goals if it weren’t for the investment made by Arab Palestinian Investment Company.

Madi and Almadhoun did not stop there. Madi traveled to San Francisco and Almadhoun to Sweden to learn about e-project management from major companies. Almadhoun visited one of the biggest startup companies in Sweden, Klarna, as well as the King entertainment company in Stockholm. Madi visited the Google headquarters in San Francisco. They returned with a different vision and started expanding their team, which now includes lead artist Fadi Zaher, game developer Asmaa Madi and back-end engineer Mustafa Balata.

The team is now working on establishing its own offices and anxiously waiting for new investments in 2017 so they can design games from Gaza for the entire world. Madi noted, “Gaza is not suitable for investments, so our project can only withstand for another six months" without additional funds.

Another young entrepreneur, Dalia Shurab, is the social media coordinator‎‏ for ‏‎Gaza Sky Geeks‎‏. She is building her own small company, Social Dalia, and is working on its administrative, financial and organizational aspects. Her company will provide online marketing services by managing social media pages, an increasingly competitive field.

Shurab ran a Facebook campaign for another Sky Geek startup, Diti Health, a mobile application that promotes a healthy lifestyle through healthy recipes and exercise. During the first three weeks of Ramadan last year, her calorie-counting event was able to attract 4,000 followers from Egypt, Palestine and Iraq without resorting to online ads.

However, this success did not guarantee her a spot in the big leagues. Shurab told Al-Monitor she got excited about her independent project and placed a bid to manage the marketing and social media presence of Expotech, a major tech forum and event organizer, but her offer was not considered because her company was not officially registered.

Shurab is saddened by the situation in Gaza, which she said is driving away many creative minds. She added that she is also finding it difficult to form a team that believes in her idea and is patient enough to work for free initially.

Despite these challenges, Shurab found a glimmer of hope in the support of Ahmed Chalabi, an engineer who bought a domain on the internet, lined up a designer for his website and hired Shurab to handle online marketing.

Mohammed Hasna, director of the Islamic Cooperation Office in Gaza, believes the lack of support is not the only problem. He told Al-Monitor, "There are many [financial supporters] for youth projects, but the young people themselves lack the ability to properly estimate the [market’s] need for their projects. In addition, the youth aren't taking care to implement the projects on the ground in a professional manner, making them fall short of other large-scale projects."