While diplomats pledged billions to Gaza’s reconstruction in Cairo, a Gazan entrepreneur was seeking funds for a tech startup accelerator in the Gaza Strip. 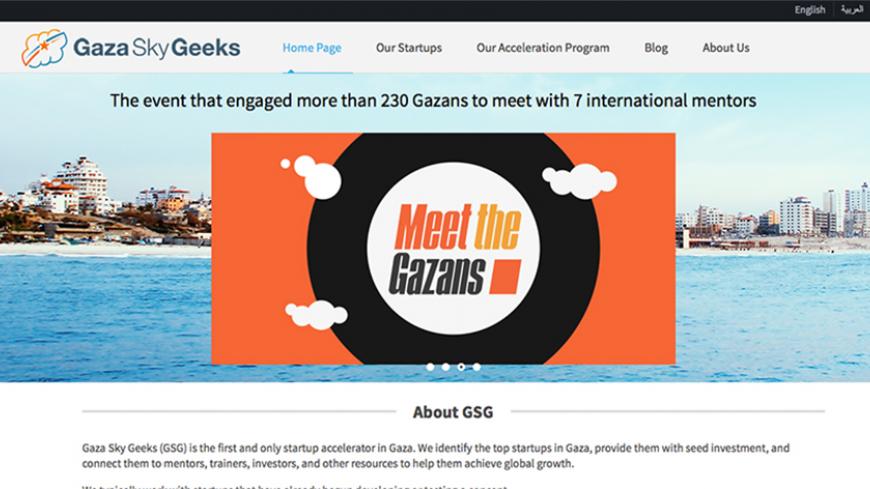 The website of Gaza Sky Geeks, a startup accelerator in Gaza, reports on a recent networking event for entrepreneurs in this screenshot taken Oct. 17, 2014. - gazaskygeeks.com

CAIRO — Away from the Gaza reconstruction conference and the donor fatigue that dominated its politics, Nalan al-Sarraj presented the work of Gaza Sky Geeks (GSG) to a community of Cairo startups and entrepreneurs.

The Gaza-based startup accelerator drew support as Sarraj asked for financing pledges ahead of a crowdfunding campaign that has yet to kick off. The $350,000 target was dwarfed by the $5.4 billion pledged to Gaza by governments a day before Sarraj took the stage in central Cairo.

Her phone rang with the first pledge two hours after the presentation. Sitting on the steps of what used to be the Greek Campus of the American University in Cairo, now a hub for young entrepreneurs, the 23-year-old showed me photos she took with her phone of the explosions she saw from her balcony in Gaza City.

Israel’s Operation Protective Edge left over 2,100 dead in Gaza and the infrastructure of the blockaded Gaza Strip in shambles. The Palestinian Authority asked for nearly $4 billion to rebuild Gaza.

“I had no idea how I got through. But I thought I had to tell people what was going on. You have no idea how much I believe in social media,” she said.

For the first month of the war, Sarraj helped displaced families using social media to collect donations, coordinate with similar efforts and spread the word about what she was witnessing. Her recollection of that time is dotted with traumatic memories, cushioned with the enthusiasm that marks her work with the entrepreneur community in Gaza.

“They don’t give up,” she said of her colleagues at GSG who worked through the nearby airstrikes rattling their building. “They are crazy about what they do.”

One of these is Mariam Abu Etwey, who won a Gaza startup contest in 2012 for her taxi-calling and ride-sharing app Wasselni. The latest startup contest featured 150 entrepreneurs chosen from 600 applicants.

“We look for tech startups. The main reason we chose this type of startup is what Gaza needs. We are isolated from the world in many ways, and technology is breaking that,” Sarraj said.

Sarraj, who helps with GSG’s communications and public relations, has her own startup nurtured by the group: Sammly, an online portal in Arabic connecting graphic designers with potential customers. She fled with her mother and sister a day before the ground invasion reached their neighborhood in August. On their last night, they had to sprint from one side of the border to the other as the airstrikes got closer. Using her mother’s Libyan passport — only foreigners were allowed to cross the border — she entered Egypt and has since connected with its entrepreneurship community. She wants to use her time there to learn so she can take the knowledge back to Gaza and share it with her colleagues.

“What blows me away and why I’m so impressed by the Sky Geeks is that these young people still have access to computers, they still have access to mobile phones to some degree and they have access to each other. And they want to just keep building,” Christopher Schroeder, the author of “Startup Rising: the Entrepreneurship Revolution Remaking the Middle East,” told Al-Monitor. “You have a choice to do nothing, or you can say, I have an interesting idea that can help the community around me. And technology makes it much cheaper and much easier for people to access it.”

Schroeder was in Cairo for the Rise Up Summit, the event that gave Sarraj the platform to present her work along with the opening keynote speakers. Throughout the busy schedule of workshops and panels at the Greek Campus, where young entrepreneurs showcased their work in booths, the spirit was strikingly more optimistic than the general mood in Egypt.

Seasonal dark clouds and the smoke of farm fires hovered in the sky. Clashes between protesters and police on public university campuses across the country crowded the headlines. The foreign dignitaries that attended the donor conference were questioned over their support for the Egyptian regime despite its rights violations. For these two days, the Rise Up participants wanted to tell a different story of both Egypt and the region.

“I can’t walk anywhere in Washington, DC, or Silicon Valley or New York or anywhere and tell people there will be a great startup gathering in Gaza. They will look at me as if I have two heads. They only have one story about Gaza, and that’s what happened this summer. There is no understanding of where this potential lies,” Schroeder said.

GSG offers working space, seed funding, workshops and networking opportunities for entrepreneurs. It is run by Mercy Corps, an international humanitarian organization, and was started with a grant from Google to generate interest in startups and then moved into the accelerator business connecting Gazans with investors.

“What’s so difficult about Gaza is the occupation. It’s an ecosystem almost [like] no other. … It is going to be hard to see how it plays out,” Schroeder said.

At the Gaza donor conference hosted by Egypt and Norway, diplomats reiterated the need for a political solution to avoid coming back every few years to pledge money to rebuild what was damaged by war.

“I call on all parties to come together to chart a clear course toward a just and final peace — including achieving a full lifting of the blockade, ensuring Israel’s legitimate security concerns and establishing two states living side by side in peace and security,” UN Secretary-General Ban Ki-moon said on Sunday. “This is the moment for transformational change.”

A look at the failed Israeli-Palestinian negotiations this August and knowledge of the history of the conflict render Ki-moon’s statements unrealistic dreams.

“No one of these entrepreneurs will sit around waiting for someone to solve the bigger mess. They are gonna say, ‘I want to take control of a future for myself now,’” said Schroeder, who sees the GSG as the new model for helping societies away from money handouts. “It’s a way to help people do what they want to do and give them the infrastructure and the learning to be able to execute them.”

In Cairo, where Sarraj’s family has already moved five times in search of a temporary home, she followed the donor conference from afar. “Maybe it’s boring that we keep hearing all this stuff, but it counts. It will rebuild lives, rebuild houses. Whole neighborhoods were destroyed. Genocide happened. Every dollar counts,” she said.

Like Schroeder suggested, she keeps a positive outlook. She got a new job in social media marketing while maintaining her work — now remotely — with her Gaza counterparts. “Here comes our part. We want also to build a new future for this generation through technology and through our work at Gaza Sky Geeks.”

[EDITOR'S NOTE: A previous version of this article mistakenly stated that Nalan al-Sarraj was from Rafah.] 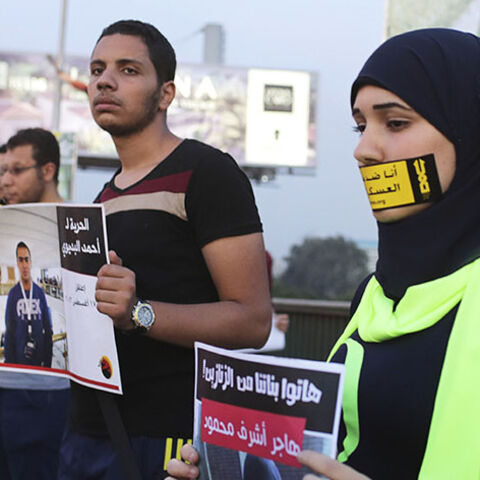