Ever-rising unemployment in the Gaza Strip has pushed young Palestinians to explore the technological sector, which largely sidesteps the Israeli siege by conducting business online. 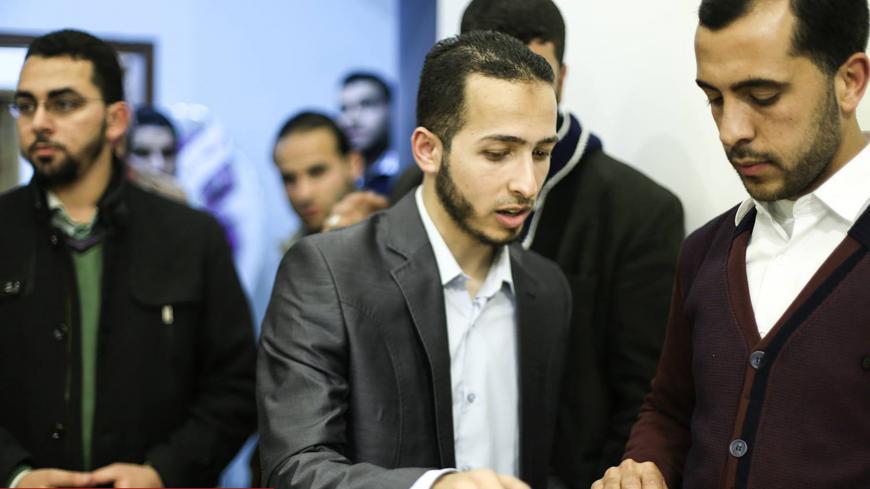 Mohammed Kodeih, founder of the Gaza-based company Haweya, attends its opening in Gaza in this image posted March 26, 2015. - Facebook/HaweyaGroup

“The Palestinian startup ecosystem is in its early stages and still maturing,” reads a July 11 report by the World Bank. It called the Palestinian situation “relatively similar” to those of Lebanon and Tanzania, explaining that startup creation in Palestine has increased by 34% since 2009. One Israeli newspaper reported that it takes only 15 days to establish a tech startup in Palestine compared to at least 30 days in Lebanon and Tanzania.

More Palestinian young entrepreneurs have turned to online projects and invested in technology in the absence of job opportunities due to the ongoing Israeli siege on the Gaza Strip. Unemployment in the enclave has reached 49.1% and 18.3% in the West Bank.

On May 17, the Palestinian Central Bureau of Statistics and the Ministry of Communications and Information Technology said in a joint press statement, “The data from the 2017 census indicated that the number of establishments that work in the information technology and communications sector accounted for 1,008 of the total [158,573] economic operating establishments in Palestine, while this sector employed 9,200 workers of the total [444,034] employees in 2017.”

Al-Monitor talked to Mohammed Kodeih, the 27-year-old founder of the Gaza-based branding consultancy Haweya. He said, “The technology sector in Gaza is constantly evolving and is attracting more investments since it does not require one to travel through the border crossings. It relies only on the internet. Tech startup owners can reach clients in the Arab and international market through paid advertising on social media networks and Google and through their personal relations with foreign companies.”

Kodeih explained, “Some Gulf customers share their projects on freelance platforms such as Upwork and Mostaql, seeking people to design and complete their projects. This allows tech startup owners in Gaza to reach these clients and build long-term professional relations with them.”

Kodeih began his independent marketing career in early 2011. A year later, he spent eight months in the Islamic University of Gaza's Business and Technology Incubator and received a grant of $4,000. In 2013, he rented a small office with only two employees before he expanded his company in 2015 and hired 17 more. Kodeih noted that Haweya now has a strategic partnership with a Saudi company he did not name that represents it in the Saudi market.

“Haweya works with several international and Arab organizations. We designed the brand package for the Qatar Development Fund in 2016 and 2017,” he said. “We also worked with the Islamic Development Bank in Saudi Arabia and with the Kuwait Fund for Development. Since the beginning of 2018, we have been designing all of the Palestine-related monthly reports, graphics and animation for the World Health Organization.”

Stressing the importance of business incubators in Gaza in establishing tech startups and spreading the entrepreneurship culture among young people, Kodeih pointed to eight incubators in Palestine, four of them in Gaza. These incubators nurture young entrepreneurs for eight to 12 months, providing them with administrative, logistical and financial support. They offer them a one-time grant of between $4,000 and $7,000.

Kodeih went on, “Power cuts are a major obstacle. We had to pay huge amounts to buy generators, but a year ago we bought solar panels.” It was an enormous outlay, he said, but necessary for the company's production.

He continued, “Closed crossings prevent us from traveling to acquire new expertise. New technologies that are necessary for our work have emerged in the past years around the world. We were not, however, able to travel for proper training. It is true that such technologies are available online, but practicing and participating in training in a more advanced scientific environment abroad would really hone our skills.”

“Young entrepreneurs in Gaza are increasingly attracted to tech startups that can penetrate international and Arab markets without the need to meet face-to-face with customers,” Mehani told Al-Monitor. “These companies have greater chances at success than those in other sectors because they are less affected by the blockade and the closure of crossings.” However, Mehani concurs that the power blackouts in Gaza that reach up to 20 hours a day have impeded startup companies.

Mehani and Dabbagh began working remotely in 2009. Today, they have an online company of 30 employees, developing and designing Android applications for Gulf companies and ministries, including the Saudi Ministries of Education and Justice.

Ashraf Hijazi, a business developer at the Business and Technology Incubator, told Al-Monitor, “We receive about 300 technology pitches every year. The Gazan market is closed and in very poor condition. But tech startups can break into foreign markets and find clients via international and Arab online platforms seeking freelancers or thanks to the entrepreneurs’ personal relationships with existing companies.”

Mohamed al-Abssi, technical adviser to the Ministry of Communications and Information Technology in Gaza, described the technology sector as vital to alleviate Gaza's unemployment crisis. He told Al-Monitor, “Most startups in Gaza operate in the Gulf markets, and a few in the European and American markets.”

The general director of company registration at the Gaza Ministry of Economy, Abdallah Abu Ruwayda, told Al-Monitor, “Most startups are referred to us by business incubators and are registered as joint liability companies. The registration fee for such companies at the Gaza ministry amount to 900 Jordanian dinars [around $1,300]. In order to encourage startups, we ask them to make a down payment and pay the rest over the course of three years.”

Professor of economics at Al-Azhar University in Gaza Muin Rajab noted that government institutions in Gaza are applying information technology in their interactions with citizens. “This boosted the Palestinian digital economy,” he said.

Maher Tabbaa, public relations director for the Gaza Strip Chamber of Commerce, told Al-Monitor, “The surge in the number of tech startups is only natural as Palestinians are aware of the value of working remotely and online. The technology sector does need any large capital and depends on the individual’s skills. What further helps this sector grow is that it does not need crossings and is [relatively] unharmed by the restrictions imposed on Gaza.”