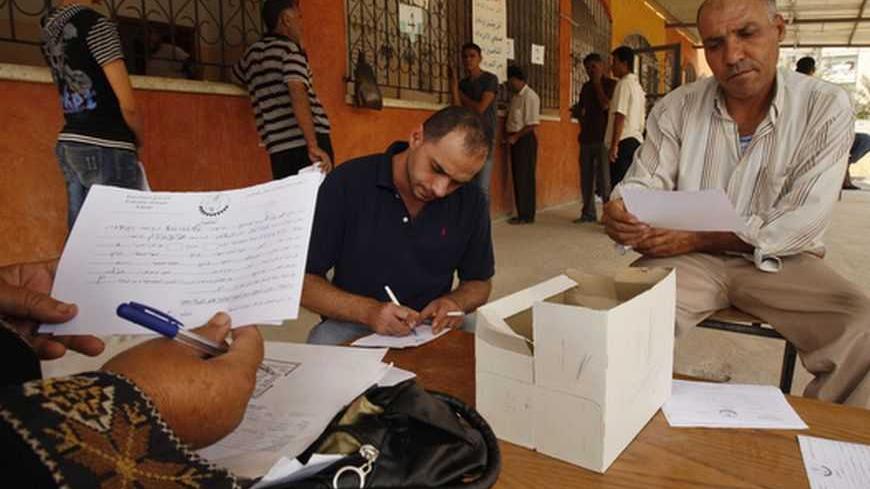 Mansour, 24, graduated as a medical secretary from a local university three years ago. His life remained idle, with no prospects of a job in his field, until he managed to open his small café in his neighborhood of Maghazi.

"Before I opened this small shop, I used to spend long hours outside my home, either at a cousin's salon or with some neighbors or friends. At some point, I thought deeply with a great deal of fear inside me, 'Will I remain like this for the rest of my life? Should I keep waiting until one of my various job applications succeeds?' I told myself, no, I should do something, I should do something before it is too late,” he said.

Mansour went through a number of jobs unrelated to his degree before deciding upon his café.

“I worked for two days as a worker in the tunnels, but I had to quit quickly, given the high risks involved. Then I worked in a concrete facility, collecting and carrying concrete on my shoulders. I used to get so angry being a university graduate and working in such hard labor. I wished I had saved time and effort by opening this small coffee shop instead of enrolling at college,” he said, grimacing.

The café barely secures Mansour pocket money, but he is glad that at least he no longer needs his father to financially support him.

"My father is already supporting others, including my daughter. Although my father's job does not earn much, he still believes in the importance of education. Having his children educated is much better than leaving them in the streets. I am now glad that I am able to support myself,” Mansour said.

Mansour’s story is not an isolated case. Youth unemployment remains a major source of frustration in Gaza. According to UNRWA, total unemployment in Gaza reached 32% at the end of 2012. Israel’s crippling siege, imposed since 2007, has resulted in a major downturn in imports and exports. UNRWA says that since 2007, Gaza has been able to export only five percent of what it did prior to the blockade.

The dire economic situation facing thousands of unemployed Palestinians has prompted the Hamas government to launch a new-job creation program.

Sirriya Abu Sam’an, a senior official within Gaza’s Ministry of Labor, told Al-Monitor that the government plans to recruit 5,000 Gaza-based university graduates at all Hamas-run ministries, including education, health, social affairs and finance.

"Our plan for the moment will include recruiting 60% of eligible qualified university graduates in the various ministries, in accordance with each ministry's needs for recruitment. The other 40% will go to people or families with special needs.

"Our plan states that the 5,000 would-be temporary workers will be able to benefit for a period of 11 months within five stages of five months, with 1,000 new temporary recruits for each stage,” the official explained.

Abu Sam’an urged all university graduates holding a high-school diploma, BA or MA to complete the registration process with the various ministries, NGOs and syndicates of university-graduates societies.

“Each temporary worker will receive an amount of 1000 shekels or $280 for BA graduates every month, while 900 shekels will go to high-school graduates. We will also be contributing to stipends given by NGOs to new recruits within those NGOs’ own job-creation programs. I expect that 15,000 jobless graduates out of the total 50,000 registered jobless graduates will be recruited temporarily in the year 2013,” Abu Sam'an said.

UNRWA has also launched a similar job-creation program that would secure 14,000 working opportunities for university graduates in Gaza. The program will include recruitment of 1,800 graduates in the agricultural field, with remaining jobs to be distributed among other sectors under the UNRWA mandate, such as health, sanitation, social and educational services.

Mansour has little hope the Hamas job-creation program will help him find a temporary job in his own specialization, highlighting concerns of political favoritism.

"Two years ago, I worked temporarily at a government-run hospital for three months. Despite the fact that I was registered and working officially at the hospital, I did not receive my stipend until I knocked on the doors of many officials there. They at first told me that I was not registered, but they eventually handed over my stipend. There were others with me who received their stipends immediately. I just hope that both Hamas and Fatah will reconcile within one Palestinian government, and that nepotism and favoritism comes to an end,” he said.

Maryam Abu Shannab, a resident of al-Shati refugee camp in west Gaza City, graduated with a primary-school teaching diploma in 2011 and has been searching in vain for a job. She shares Mansour’s concerns about political favoritism hindering employment opportunities in Gaza.

“The division between Hamas and Fatah has been impacting us university graduates. Before Hamas came to power, there was Fatah and we in the family were branded as Fatah, but I never remember a family member of mine had benefited under Fatah. Now only favoritism and nepotism work across the Gaza Strip,” she told Al-Monitor while attending a workshop on job prospects for Gaza university graduates, held at a public hall in Gaza City this week.

The Labor Ministry official denied that Hamas was hiring based on political favoritism, and stressed the fairness of the new job-creation program.

"Absolutely not, our recently announced job-creation program is not directed at a certain category of Palestinian society. We are doing it with a great deal of fairness and objectivity, so that thousands of university graduates can benefit from it, irrespective of their political affiliations,” Abu Sam'an said.

While many youths express their frustration at their political leaders, the ultimate anger is reserved for the main party responsible for Gaza’s economic and employment woes: Israel.

"Israel claims it really wants to ease its measures against Gaza, but nothing has changed. The Israeli blockade should come to an end,” said Di’ya al-Haj Ahmad, a 25-year-old nursing graduate who has sought work in Gaza’s tunnels.

“Can you imagine? I have a diploma of nursing, but have been forced to work in underground tunnels for almost three years now!”

“Why am I and many other university graduates forced into such harsh, intensive work?" he asked angrily. It's a question to which Hamas is struggling to respond.