Mother of the Year Award Goes to Gaza Widow

Aisha Abu Shannab lost her husband and son to war, but has managed to raise her remaining children and run a small NGO for widows in Gaza, Rami Almeghari writes. 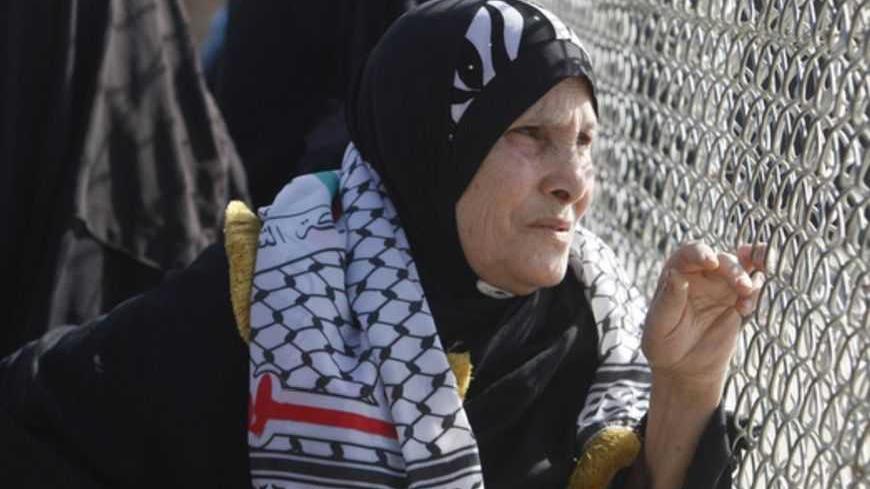 A Palestinian woman waits for the return of Fatah movement activists at the Rafah border crossing in the southern Gaza Strip Dec. 3, 2012. - REUTERS/Ibraheem Abu Mustafa

Aisha Abu Shannab, or Om Hassan, a woman in her 50s from the Gaza Strip, was awarded the Mother of the Year prize on Feb. 28. She received the honor from the Ex-Warriors Association, a local chapter affiliated with the Arab League.

"My husband Ismail left us for his final rest in 2003, and since then, I have been taking care of our seven children, including two little daughters. Besides being a widow and mother, I began taking care of this association since 2004,” she told Al-Monitor at the office of her non-profit organization in Gaza City, Lighting Candles.

"Abu Hassan (Ismail) was such a great husband and his greatness also showed in several life experiences, particularly when the Fatah-led Palestinian Authority would arrest him. Once I shouted some prayers against those who came to arrest him, but he responded by telling me: ‘Please do not pray against them, but rather pray for them, so that they could get better.’ He was such a great educator and a man of tolerance,” Om Hassan recalled.

Throughout the years that followed the Israeli assassination of Ismail — who was internally branded a peace dove for his relentless reconciliation efforts between Hamas and Fatah — Om Hassan took the load of raising their children alone. She was once again struck with agony during Israel’s Cast Lead offensive on the occupied Gaza Strip in 2008-2009, when an Israeli airstrike targeting the Jawazzat police compound killed her eldest son, Hassan.

"The wisdom of my late husband has ever been a source of inspiration to me when it comes to my grown children. My eldest son Hassan did some regular accounting work before he moved to the police headquarters, where he was killed. He sought my opinion when the late police commander, Toufic Jaber, nominated him for a police job. Jaber was also killed on the same day, Dec. 27, 2008. I advised Hassan to take the police job for one year, in which he would temporarily resign from his accounting job. He agreed and moved to the police — may he rest in peace,” she recounts somberly.

It was not the first time Om Hassan was tasked to care for her children alone. Ismail also served seven years in Israeli jails after being arrested in 1989 during the first intifada.

"My children were still little kids and I had to bear responsibility for them all, along with my blind mother-in-law, Ismail's mother. Once I visited Ismail at the prison. I was shocked to see him lose much of his weight. My tears were about to fall, but I held them back and decided to joke with my husband instead: ‘What's going on, they don’t seem to be feeding you well in prison,’ I said to him.”

With Ismail behind bars, the family no longer received his salary from UNRWA, where he was employed. Om Hassan raised her children for those seven years on regular stipends by the Palestinian Liberation Organization, which set aside funds for families of Palestinian prisoners in Israel.

In 2008, as Om Hassan became more active in women’s-rights issues, she and several colleagues through her NGO managed to push new legislation through the Gaza-based parliament that ensured widows full custody of their children should they choose not to remarry.

"We managed to influence new legislation that allows widows who wish to stay with their children and not to marry again, to keep their children with them for the rest of their lives. This was a remarkable achievement that continues to relieve hundreds of widows today,” she explained.

The Mother of the Year prize this year was a medal and $1,000 cash granted to several mothers across the Arab world that have lost their husbands to conflict and were burdened with raising their children alone.

Om Hassan has remarkably survived the deaths of her husband and son to raise her remaining children and run a small NGO dedicated to improving the lives of widows in Gaza.

Asked by Al-Monitor what International Women’s Day represents for her, Om Hassan said: "I would like to urge all working women to start taking better care of their own families and children. A woman should know how to balance her own being as a woman or a mother and her reality as a working woman.”