Syrian women who have lost their husbands in the ongoing war are taking advantage of opportunities at Aleppo's Balqis Center to learn work and literacy skills. 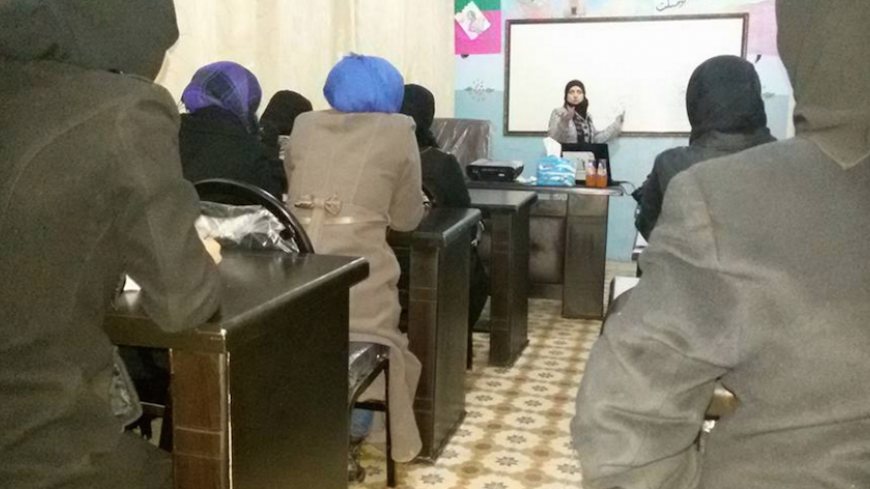 Women participate in a training course at the Balqis Center in Aleppo, Syria, Dec. 28, 2015. - FACEBOOK/BalqisCenter

ALEPPO, Syria — More than five years into a raging war in Syria, Syrian women are shouldering a very heavy burden. Some see their rights violated when they are detained and others are displaced in refugee camps. Many of them have lost a husband or son.

In a report issued on March 20, 2013 — the latest available on Syrian mothers, issued on the eve of Mother’s Day in Syria — the Syrian Network for Human Rights indicated that at least 54,000 women had lost their husbands, including 40,000 mothers. The rest are widows with no children. The report counted 35,000 married men who have died for certain, while 19,000 have disappeared, leaving their wives unknowing whether their husbands will return.

Syrian women who have lost their husbands in the fighting or from shelling or arrest are living a tragedy. In Syria, women often rely completely on men, who work to provide for the family. The woman’s role is restricted to caring for the children and attending to housework. Therefore, when a Syrian woman loses her husband, it is hard for her to adapt to the new situation, especially if she has more than one child.

Under these circumstances, these women have to become providers to support their children in a deteriorating economic situation in the country due to the war. To help them, activists in the part of Aleppo that is under the Syrian opposition’s control established the Balqis Center in November 2015. The center trains women in work skills and empowers them to build a profession and become active, self-reliant members of society.

Qamar al-Sakhni, the head of the Balqis Center, holds a bachelor’s degree in law from the University of Aleppo. He told Al-Monitor, “The Balqis Center helps develop women’s skills and provides care for children. Its main goal is to free women from the war and give them a suitable environment to care for their children. Other goals focus on two themes. First, we aim to teach women two professions: knitting and sewing. These professions that are common in Syria allow women to rely on themselves and obtain a source of livelihood. Second, we aim to eradicate illiteracy. We give classes to women who cannot read and write, and 30 women have so far benefited from this service to help their children in their studies.”

Qamar added, “We have more than 225 women benefiting from the center’s services. Most of them have lost their husbands for various reasons and some are divorced. All of the women enrolled at the Balqis Center are trained for free and are not required to pay any amount in return for the skills they acquire. The Balqis Center receives support from the Tamkeen organization, a British organization that supports local councils’ projects in Syria. The local council of the city of Aleppo affiliated with the Syrian interim government has full administrative supervision of the Balqis Center.”

Commenting on the people working in the Balqis Center, Qamar said, “In the educational sector in the center, there are female teachers who have already obtained their university degree and have strong academic credentials to serve the center and its members. As for the technical sector, educational experience is more needed than academic credentials. All educators and teachers are women except for the center’s guard.”

Many of the women who decided to join the Balqis Center are focused on learning marketable skills. One of them, Maha, told Al-Monitor, “I came to the Balqis Center to learn how to sew and knit. My husband was killed in a bombing and I have three daughters aged 6, 8 and 15. I am trying through the center to learn a handicraft to be able to provide for my daughters. This skill will allow me to sew clothes for my daughters at a cost much lower than the cost of buying clothes from the markets. I have greatly benefited from the courses and now I am trying to develop my skills even more in order to find a job in the future and to be independent.”

Other women and girls enrolled at the Balqis Center are learning to read and write either to help their children in their studies or to find a job and provide for them. Umm Ahmad told Al-Monitor, “I joined the center since I am illiterate. My husband was killed at the beginning of the armed movement in Aleppo and I have small children — two daughters of 7 and 8 years and a son who is 5 years old. I needed to learn how to read and write in order to help my children get an education. At the same time, I bring my kids with me to the center so that they can learn how to read and write and benefit from all of the activities at the center. We are currently going through a hard time. By learning how to read and write I may be able to get a job later on to teach young children in one of the mosques in the city. I was a stay-at-home mom, but after the death of my husband, I was forced to find a job to survive and provide for my children.”

Still other women decided to join the Balqis Center to help their husbands pay the monthly family expenses that burden the citizens amid a lack of job opportunities.

Umm Abdul Karim told Al-Monitor, "I decided to join Balqis Center to learn sewing since my husband was no longer able alone to provide for the family in light of the difficult economic situation and given the meager salary he gets from his work as a porter. His salary barely gets us through the month. It is my duty as his wife to help my husband in the management of family matters, since we are going through a very difficult period. I have a three-month-old baby. When I come to the center, my mother-in-law takes care of him. Everyone knows that life is hard in Syria. We must work to survive.”

Women of all walks of life in Syria are well aware that having a job has become an urgent necessity in the harsh conditions resulting from the war. According to a report by ESCWA, 80% of Syrians live below the poverty line, and sources from the Syrian government-affiliated Central Bureau of Statistics report that the unemployment rate among Syrian youth is close to 70%. The situation in Syria is deplorable.