As Iraq’s population has been struggling with conflict and drought since the 1980s, many older, illiterate Iraqis are now trying to learn how to read and write under challenging circumstances. 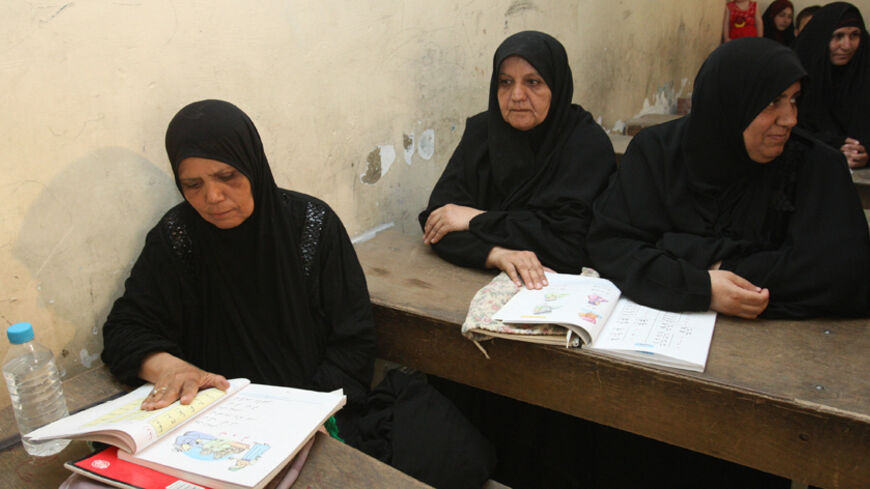 Iraqi women take part in a literacy class at a school in the Hay al-Amel neighborhood of Baghdad, Sept. 9, 2008. - ALI YUSSEF/AFP/Getty Images

A video of Iraqi peasant Umm Imad from the city of Ramadi, 110 kilometers (68 miles) west of Baghdad, has been circulating online among Iraqis. The video reveals the inability of the elderly woman to understand school lessons.

Although the video reflects the difficulties that those who have missed their chance of education face when returning to school at a later age, it also shows the willingness of some to learn how to read and write, at a time when the Iraqi Ministry of Education seeks to foster the role of literacy centers.

Umm Issam, 55, resident of Karbala, a city 108 kilometers west of Baghdad, does not care about obstacles and has decided to battle ignorance. With the help of her daughter Alia, 20, she learned how to read, and she can now read the paper and, most important, the Quran.

Alia, who was in her last year of a three-year bachelor's degree program, said, “My mother was determined to learn and she tried to take lessons, but she failed due to the traditional teaching methods and the inability [of the instructor] to transmit the message correctly to the students.”

Abbas Fadel told Al-Monitor in Babil, a city 100 kilometers (62 miles) south of Baghdad, “The lessons do not reach the desired level, not because of the teachers but due to the lack of capacities and the slackening of the Ministry of Education in fulfilling its promises of employment to teachers at the literacy centers.”

Fadel said, “I have been lecturing since 2013, hoping that I will be privileged in my job, but others stole my right to employment due to corruption and favoritism.”

The Ministry of Education seems to give priority to those who have volunteered to teach in jobs within the cadre of the literacy association.

UNESCO, which began a literacy program in Iraq in 2011, stated that around 20% of Iraqis are illiterate, and that this percentage is higher for rural women, of whom 50% ages 15-24 are illiterate.

Meanwhile, there are about 600,000 students in literacy centers, and due to the deteriorating security situation in areas suffering from military operations, less people are seeking education at these centers.

Member of Babil’s provincial council Suheila al-Khakani told Al-Monitor that, in her experience, “women are more driven than men in seeking education. This perhaps stems from their desire to be equal to men, who are not readily present due to other responsibilities.”

However, educational researcher and teacher Sabrin al-Khafaji told Al-Monitor, “[I believe] religious motives increase women’s desire to learn and be able to read and memorize religious songs, and to read the Quran as well as religious publications and books, which have been widely spread since 2003.”

Sabrin said, “Some women have a strong will to learn, even under the toughest circumstances, so they ask for their children’s help at home. Many of them have succeeded and are now reading the Quran and religious books.”

Al-Monitor visited the literacy center in the city of Hamza al-Gharbi, 30 kilometers (19 miles) from Hillah in the center of Babil province, where the Shatt al-Arab elementary school was turned into a tutoring center.

Hasaniya Ali, who supervises and teaches classes at the center, told Al-Monitor, “Iraq’s social culture still prevents many illiterate women from enrolling in the center. The remote rural areas and the deteriorating security situation in some regions are not conducive, either.”

Perhaps these reasons pushed Hajj Adel Abdel Hussein to forbid his three daughters from completing their education. He decided to find them husbands instead, and as a result, the knowledge they had acquired before they left school left them without good reading and writing skills.

In Babil, lawyer Kawthar Hussein, 55, succeeded in completing her university education after graduating from literacy schools that were established in Iraq in the 1980s.

Hussein said, “The eradication of illiteracy was suspended due to the wars that have been breaking out in Iraq since the early 1980s.” The successive wars in Iraq have led to grave humanitarian, economic and service-related losses. “The improving standards of living will encourage more people to enroll in these schools when they open their doors, provided that the security situation becomes stable,” Hussein said.

Author and university professor Kamel Knani agreed with Kawthar and told Al-Monitor in Baghdad, “The educational situation in Iraq has changed a lot compared to the 1970s, when ambitious educational plans were set up that placed Iraq at the forefront of countries in the region in that regard. The subsequent years of war and blockade imposed on Iraq prioritized the political conflict and economic concerns over official and social ones. As a result, thousands of people quit school."

Kwathar added, “The security problems after 2003 increased illiteracy in Iraq in a unique way unprecedented in the region.”

Knani proposed several solutions including “conducting an in-depth study of the problems and planning to resolve them permanently, setting a budget for eradicating illiteracy and resuming work on the campaigns to educate adults.”

Writer and social and educational researcher Maki al-Sultani suggested to Al-Monitor “urgent solutions to eradicate this widespread disease,” in reference to ignorance.

Sultani underlined the importance “of attributing a role to schools and colleges to fight illiteracy by starting classes on their campuses instead of waiting for independent and private projects. This would contribute to decreasing illiteracy in Iraq.”