The families of 1,700 military cadets slaughtered at Camp Speicher on June 11 have received little or no attention from Iraqi authorities. 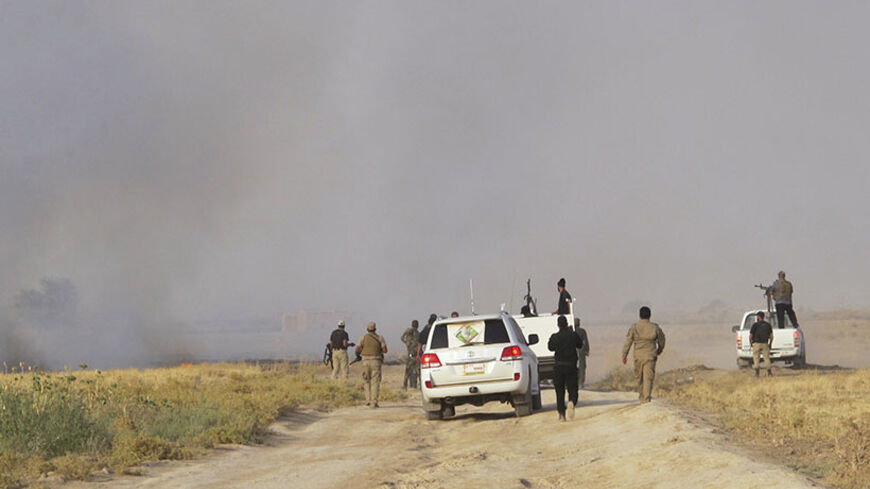 Shiite volunteers patrol on the outskirts of Tikrit as smoke rises from clashes with Islamic State fighters, July 20, 2014. - REUTERS

BABIL, Iraq — Hantoush Shaker, from Babil governorate (100 kilometers, or 62 miles, south of Baghdad) has not abandoned hope for the return of his 20-year-old son Saeed, who went missing after the massacre of military cadets at Camp Speicher. On June 11, armed groups, led by members of the Islamic State (IS) attacked the city of Tikrit, the hub of Salahuddin province, and claimed to have killed around 1,700 cadets at the province's air base, 80 kilometers (50 miles) north of Baghdad.

Nevertheless, Shaker is desperate to find his son alive, so he sought to meet with officials in the Ministry of Defense in the Green Zone in Baghdad.

At the checkpoint at the entrance of the heavily fortified security zone, the guards explained to him that it was prohibited to enter the ministry. When Shaker told them his story, they sympathized with him and advised him to write a letter to the ministry, that they would attach to the mail to be delivered there. Shaker headed to the nearest “petition writer” in a neighboring region and rushed back to the soldiers in the Green Zone to hand it in, only to return to his home city empty-handed.

Shaker told Al-Monitor, “I have been waiting for an answer ever since July 5.”

The Speicher base is located between the cities of Beiji and Tikrit, and served as an operating base for US air forces. Following the withdrawal of US troops from Iraq in 2011, the base turned into an Iraqi air force academy, and preserved its name in honor of a US naval aviator, Capt. Michael Scott Speicher, who was shot down during the Desert Storm war in 1991.

Shaker’s story is similar to the stories of thousands of parents and families who lost their loved ones, and could not believe that their sons would never return, until they saw a new video showing details of the massacres.

This prompted them to protest in several Iraqi cities in the center and south, demanding to know the circumstances of the incident, hold those who ignored the situation accountable and compensate the families of the victims.

On the night of Eid al-Fitr, IS claimed responsibility for the entire operation on its Twitter account. Photos of militants firing at young unarmed men lying in a pit in an agricultural area were also published.

A police officer in Babil, Ahmed Fadel, told Al-Monitor, “Some of the victims’ families resorted to going to police precincts,” but said, “The police cannot do anything about it.”

Karim al-Sultani, the father of one of the victims, told Al-Monitor in a telephone interview that he lost his son in the same incident. “We went to the political parties headquarters, local government councils, and the provincial councils, but we returned only with vain promises,” he said. “We want to know the truth about what happened and we want those who were responsible to be held accountable.”

The mother of one of the victims of the Speicher massacre stood in the Iraqi parliament and threw her veil at the MPs to protest silence about this crime, a move that shook the Iraqi street.

In a phone call with Al-Monitor, Ali Hashim from the town of Shatra in the north of Dhi Qar governorate (375 kilometers, or 233 miles, south of Baghdad) spoke about the details of the death of his cousin Ali Muheisen, 20.

“Muheisen traveled to Speicher Base when his name appeared in the list of admissions to the air force. Cadets had gathered at Imam Ali airport in Nasiriyah before moving to the base,” he said. “This was his first and last trip after enrolling. After he disappeared, his sick mother died after giving up on his return.”

Hashim said, “Everyone was getting ready for Muheisen’s marriage during his first work leave. But he did not come back.” Ali urged the government, and in particular the MPs of Dhi Qar, to quickly uncover the truth and compensate the families of the victims.

Official sources in Dhi Qar pointed out that “more than 400 young people from the province went missing at the Speicher base.”

Media outlets published the story of Ali Hussein Kadhim, from the city of Diwaniya, the sole survivor of the massacre, in which he described how gunmen divided the cadets into groups on a sectarian basis and then shot those lying on the ground. Mishaan al-Jabouri also reported via al-Shaab satellite TV channel the names of the perpetrators who committed the massacre.

Saad Hussein, the director of the Martyrs Foundation in Hamza al-Gharbi, believes that disclosing the names of the victims and considering them martyrs would ease the pain of their families; he recalled the missing persons of the mass graves under Saddam Hussein’s regime, where families suffered greatly before the dead were recognized as martyrs.