With the new school year approaching, Iraqi schools in Babil province will be facing major problems with the massive number of displaced students. 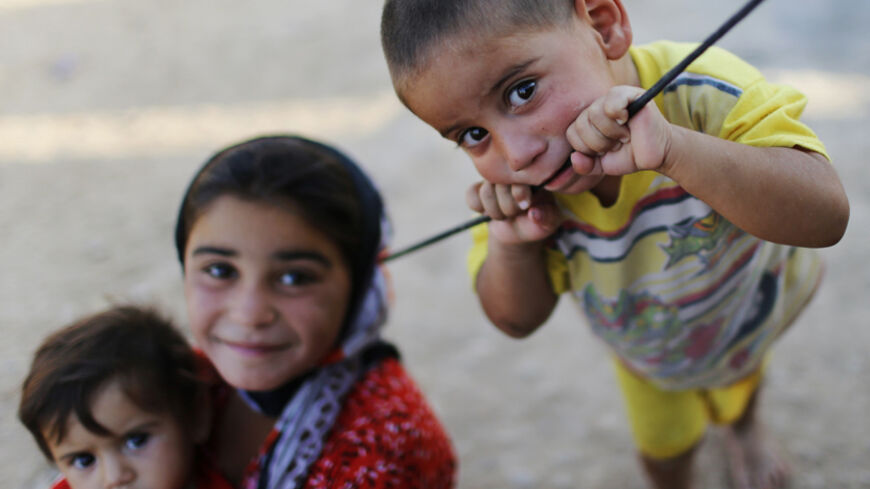 Displaced Iraqi children, who fled from Islamic State violence in Mosul, play outside their tent at the Baherka refugee camp in Erbil, Sept. 14, 2014. - REUTERS/Ahmed Jadallah

BABIL, Iraq — In preparation for the start of school, authorities in Babil province have managed to evacuate displaced families from the many schools that had served as shelters, said educational supervisor Qasim Sultani in an interview with Al-Monitor.

Since the outbreak of fighting between the Iraqi army and allied militias on the one hand and the Islamic State and its allies on the other in northern and western Iraq, hundreds of families have fled conflict areas, seeking safety in the central and southern provinces. Over the summer, empty schools in Babil province, 100 kilometers (62 miles) south of Baghdad, received hundreds of displaced families.

The schools will be overcrowded with students for the 2014-15 academic year, following the cabinet's recommendation that the Ministry of Education enroll displaced children and youths. According to Hashim Sultani, a professor at the Babil province education directorate, doing so will put the average number of students per class at 50 to 60. He told Al-Monitor that the recommendation is “an inevitable solution.”

Sultani noted, “The new academic year will officially start on Sept. 21 … The displaced families will be moved from the schools to mosques, enclosed halls and some municipality buildings." He said, “In the city of Hillah, the capital of Babil province, the famous Babil Hotel was evacuated to host displaced families,” so the schools could be readied for the academic year. According to Sultani, only one school — the Manama school in the small town of Hamza al-Gharbi, 30 kilometers (19 miles) south of Babil, which has 10 elementary schools — will be used to accommodate the displaced.

“In some central and southern parts of Iraq, where there is no accommodation available for displaced families, it is necessary to divide a school into two parts: a section for the families and another one for the students. In two-story schools, the upper floor will accommodate the displaced, while the students will attend classes on the first floor,” said Sultani.

Sahar Abdul-Hussein, public relations officer at the immigration department in Babil, under the Ministry of Displacement and Migration, told Al-Monitor, “The number of displaced in the province has increased to 4,600. The concerned parties have done their best to ensure their stability in terms of work and to enroll their children in schools and colleges.”

Yet, a teacher, who spoke on condition of anonymity, told Al-Monitor, “The educational authorities have failed to address the lack of schools and the extensive damage caused to them by the displaced having lived there. The bigger problem, which has yet to be resolved, is the massive number of students per semester.”

Kawthar Kallabi, a social and educational researcher, pointed out another problem to Al-Monitor — "the troubled mental health of displaced students, while there are no available treatment mechanisms.” She said, “Treatment consists of improvisational techniques by the teachers themselves that are limited to consolation and pep talks. However, there is a need for psychologists and social workers, who are not present at schools.”

Kallabi stated, "Many displaced students share stories with other students and children of slaughter with knives, killings, corpses and bloody scenes, all of which they have witnessed.” Such experiences will almost certainly cause serious social problems for some of the displaced children and youths, who number in the thousands.

Qasim al-Rubaie, educational supervisor at the Babil province education directorate, spoke of another problem, this one involving “the language [challenge] for Turkmen and Yazidi students, who do not have the required reading and writing proficiency in Arabic.” He said, “This requires additional time and for the teachers to further focus on the quality of the lessons, which cannot happen with the large number of students in the classroom.”

The students confirm this. Ali Lafteh told Al-Monitor, “Even before the arrival of the displaced, there was a single desk for every five students, and sometimes some of us would even sit on the ground.” Lafteh also said, “The lighting is not good. There is no heating system in winter nor a cooling in summer. The buildings of lots of schools are damaged.”

Mahdi Sultani, a member of Babil’s provincial council, told Al-Monitor, “The provincial administration is determined to build caravans and speed up [the establishment] of prefabricated schools, to contain the massive number of students that has became a problem plaguing most parts of Iraq.”