The lack of schools and large number of students in the same classroom have negatively affected the learning process and the future of Iraq’s new generation. 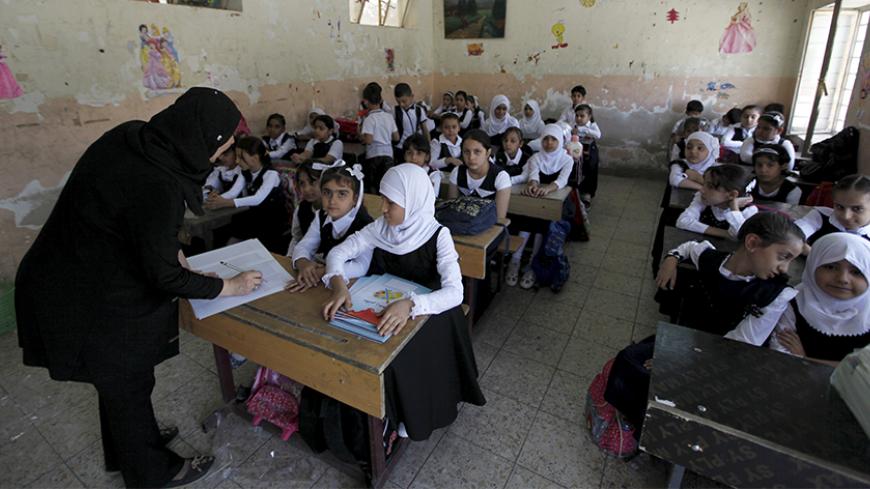 BABIL, Iraq — Under the rule of former Iraqi Prime Minister Nouri al-Maliki (2006-14), $150 million was allocated to the construction and development of public schools in several Iraqi areas. Yet only 6% of the project was implemented.

As a result, there is a significant shortfall in the number of school buildings, while classrooms are extremely packed and overcrowded. The Ministry of Education announced on Sept. 16, 2015, that Iraq is in need of about 9,000 new schools, given the overcrowded classrooms that negatively affect the educational process.

In the same vein, on Nov. 4, 2015, an Iraqi citizen staged a two-day sit-in in Karam al-Bari primary school in northern Dhi Qar province, south of Baghdad, protesting the large number of students, which exceeds 60, in the same classroom.

Majed Fadel, a professor from Babil, told Al-Monitor, “Given the large number of students in the same classroom, the teaching process and conveying the message to all students have become a difficult task to achieve, as not all of them would be focused on what the teachers are saying.”

He added “This is not to mention that in packed classrooms, diseases and infections are easily transmitted among the students. Things get worse with the scorching heat as temperatures hit around 50 degrees Celsius [122 degrees Fahrenheit] in the absence of ventilation or air-conditioning systems in classrooms.”

Al-Monitor also met with Saad Hassan, 10, from Babil, who dropped out of school and is now working as a peddler in a large market in Hillah. “I left school because the classroom was packed with students and I could not grasp anything of the lessons. The teachers did not pay me any attention because there were so many students in the class. Sometimes I would skip school and no one would notice,” he said.

The poor and imbalanced educational process has pushed some parents to enroll their children in private schools.

Saad al-Hilali, a merchant from the city of Hillah who enrolled his children in a private school, told Al-Monitor, “Classrooms at Al-Zahra school, which is a few meters away from my home, have about 50 students each. I had to enroll my son in a private school located about an hour away from our home, where there are no more than 15 students per classroom. My son has started to perform better in school.”

The lack of schools and crammed classrooms are not only found in urban schools. Alaa al-Khafaji, a teacher in Al-Yarmouk high school in the countryside of Babil, which is about 50 kilometers (31 miles) from the center of Babil province, told Al-Monitor, “Some classrooms in the schools in the countryside include 70 students coming from different neighboring villages. The more the tribes have good ties with government officials, the more they manage to convince them to build schools in their areas, in the absence of a clear schools distribution plan that takes into account [the areas’] needs and population density.”

For his part, Abu Rihab al-Shammari, a teacher from the city of al-Suwaira, south of Baghdad, told Al-Monitor that internal displacement is another factor contributing to the jammed classrooms.

“Hundreds of families who escaped Mosul, Ramadi and Salahuddin arrived in the city, and parents had to enroll their children in schools. This has increased the number of students in schools, which are not well-equipped for such large numbers,” he said.

He added, “School [employees] had to work double shifts sometimes, and three schools were merged in one building to accommodate the large number of students. Some teachers have also volunteered to give extracurricular lessons to displaced pupils."

Shaheed al-Ghalibi, head of the Education Committee at the Dhi Qar provincial council, told Al-Monitor, “The large number of students is intimidating for the teachers, as they are no longer able to control the class. The class period was reduced to less than 45 minutes.”

Ghalibi said, “The Education Directorate in the Dhi Qar governorate has been merging schools to be able to accommodate the large numbers of students, with one building including four different schools. There are more than 90 slum schools in the governorate, with about half a million students.”

Parliamentarian Ahmed Taha, member of the parliamentary Higher Education and Scientific Research Committee, told Al-Monitor, “The lack of planning has caused a discrepancy between population density and the number of schools. This is not to mention the rampant corruption, causing the funds allocated for school construction since 2003 to be wasted.”

Building a new Iraqi generation will remain a difficult task to achieve, as long as the educational process is not rectified in Iraqi schools. The first step on this path would be to increase the number of schools in a way that goes in line with the population density. They also need to be equipped with modern education equipment and means, providing convenience and comfort to students to encourage them to attend classes.