With rising illiteracy rates across the country, particularly in rural areas, the Iraqi government has launched initiatives to boost literacy. 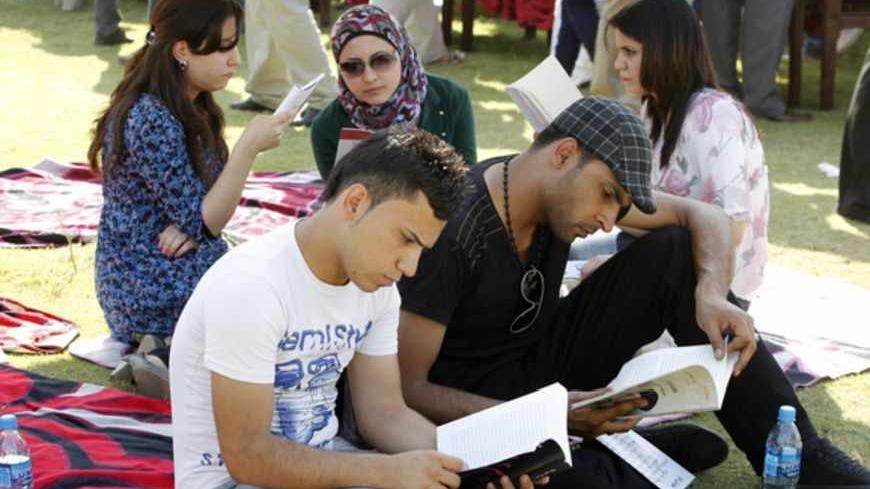 People read books during the launch of a reading initiative in Baghdad, Sept. 29, 2012. The "I am Iraqi ... I read" initiative was launched by activists to encourage reading in a country that had suffered decades of war and internal struggle. - REUTERS/Thaier al-Sudani
Ali Abel Sadah
June 13, 2013

Iraqi authorities have decided to establish more than 500 literacy centers, after the Ministry of Education, led by Sunni politician Mohammad Tamim, acknowledged that the illiteracy rate in Iraq had risen to 22%.

The spokesman for the Commission for Literacy, Yehya al-Saffah, told Al-Monitor, “Around 5,000 illiterate individuals will enroll in the new centers.”

Saffah added, “We are trying to reduce the illiteracy rate, which has reached nearly a quarter of the population. It currently stands at 22%.”

The ministry announced in an official statement that it seeks to employ teachers to open classrooms in the newly established literacy centers.

In September 2012, the Iraqi government decided to allocate sufficient funds for the literacy project, and the Ministry of Finance, led by Sunni leader Rafi al-Issawi, requested it specify the exact amounts of these funds but did not receive them.

The illiteracy rate in Iraq in 1977 was about 53%, according to the official documents issued by the Ministry of Planning, but this ratio dropped to 27% in 1987, after the issuance of the compulsory decision of the National Literacy Campaign.

Yet the government’s literacy program may fail due to the lack of funds and teaching staff in a number of provinces.

Ayad al-Korawi, a member of Diyala provincial council, warned that the literacy program in the province may face setbacks because of the inability to pay the lecturers’ salaries over the past four months. Lecturers in more than 300 literacy centers spread across the province's districts and areas have not been receiving their financial entitlements since December 2012.

Some 43,000 residents of Diyala are illiterate.

In a statement to Al-Monitor, Korawi said, “Keeping the situation as it is now will push numerous lecturers to stop working, hindering the implementation of the literacy program.”

Korawi called on the minister of education to “immediately intervene in order to come up with logical solutions to ensure the payment of delayed financial entitlements to the lecturers and to find a fixed mechanism for salary disbursement.”

But Minister of Education Mohammad Tamim resigned from his post last March, after having objected to the Iraqi army’s entry into the town of Hawija.

In this context, the UNESCO office in Iraq has opened a literacy network in the country.

International supervisors of the network said, “Most of the available statistics on the literacy rate are based on old data dating back to more than 10 years ago, since the last official census in Iraq was conducted in 1997.”

Iraqi society comprises a young population, as the proportion of persons under 15 years of age represents 42.9% of the total population.

The UNESCO office confirmed in a statement that “the surveys recently conducted offered a more recent idea about ​​the status of combating illiteracy but not as comprehensive as the official census."

Available data suggest that the overall education rate in Iraq is nearly 80%, with an illiteracy rate ranging between 18-20%. The illiteracy rate for women is estimated at 26.4%, compared to 11.6% for men.

But according to the [UNESCO] statement, “Rural communities are more affected by illiteracy than urban communities, despite the fact that the proportion of illiterate women in both societies surpasses that of illiterate men.”

Local and international reports confirm that the rate of illiteracy in Iraq is on the rise and that there are around 8 million illiterate individuals between the ages of 15 and 40 years.

After the Council of Representatives passed the anti-illiteracy law and formed a public body, 17 ministries are preparing to implement the national strategy prepared by the Iraqi government.

Ali Dujaili, a civil activist in Iraq, said in a statement to Al-Monitor, “The government has to develop a plan limited by a time frame in order for the strategy to be scientific and feasible, and it has to invest the energies of civil non-governmental organizations.”

This is not the first time governments in Iraq have developed plans to combat illiteracy, but they have not typically produced good results. Dujaili believes that the reason is “the lack of coordination between Iraqi government institutions on the issue of illiteracy in the country.”