Why has illiteracy rate gone up in Iraq?

As the Iraqi government has failed to improve the education sector, the illiteracy rate has increased significantly in different parts of the country. 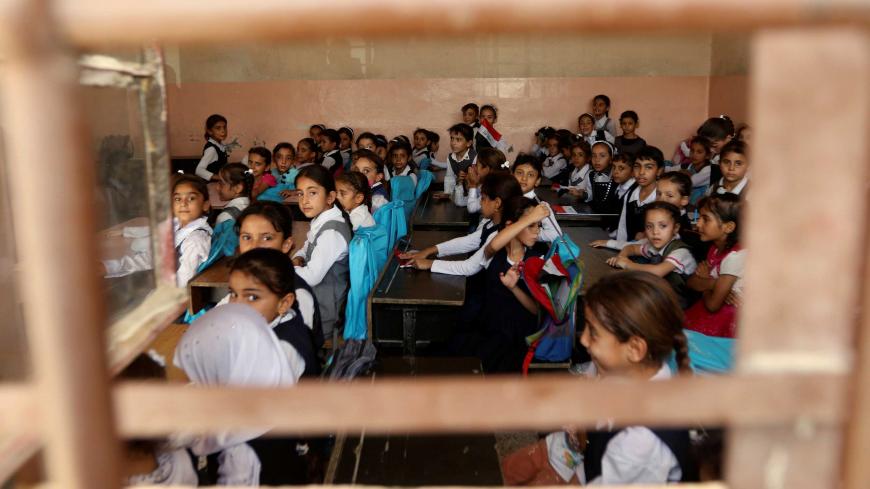 According to the head of the literacy department at the Directorate General of Education in Basra, Karim Handhal Abdul Karim, student participation in literacy centers in Iraq's southern province of Basra has dwindled in 2018 by more than two-thirds compared to 2013.

He attributed the decline to the fact that students enrolled in literacy centers are no longer paid by the government for taking classes at these centers.

The waves of displacement in the past four years are a reason behind the surge in the illiteracy rate in the country. More than 3.5 million people resided in camps with few or no schools or educational activities. As they returned to their homes in the governorates of Ninevah, Anbar and Salahuddin, they discovered that many of the schools that the Islamic State (IS) had used as a base were destroyed.

The official figures that the Ministry of Planning provided to Al-Monitor show that the illiteracy rate increased to 8.3% among Iraqi youths. The Iraqi High Commission for Human Rights (IHCHR) estimates the rate to have reached 9%.

According to official figures, the youth population in Iraq represents 10.5% of the country’s total population — which is estimated at 38 million people, former Planning Minister Salman al-Jumaili told Al-Monitor in 2017. This would mean that there are nearly 450,000 illiterate youths in Iraq.

Qusay al-Yasiri, a member of the parliamentary Education Committee, stated Nov. 14 that the illiteracy rate has possibly reached 50% in the country. Commenting on this, Yasiri told Al-Monitor, “The illiteracy rate in Iraq ranges between 45% and 50%. Such high figures could generate major problems.”

He added, “The highest illiteracy rates are found in areas previously held by IS, which witnessed waves of displacement over a period of four years and where poverty rates have increased. This has caused the surge in illiteracy rates in these areas and throughout Iraq as well.”

In a Nov. 19 press release, UNICEF wrote, “The five governorates with the lowest school enrollment and attendance rates are concentrated in the country’s southern governorates which remain its poorest, and in Anbar and Ninawa.”

Rezan Sheikh Dler, a former member of the parliamentary Women and Children's Affairs Committee, told Al-Monitor, “Illiteracy is spreading wide in the country — particularly among the post-2003 generation. The waves of displacement since the start of the sectarian problems in the country in 2006 have had a grievous impact. While 10% of the children were not enrolled in schools, many of those who attended [classes] dropped out.”

Al-Monitor obtained the IHCHR statistics that indicate a total of 132,000 students across the country dropped out of school.

IHCHR member Anas al-Azzawi told Al-Monitor, “The IHCHR pointed at the elevated illiteracy rate in the country — particularly among the youths. Based on that, we started developing a strategy to lessen these rates to be submitted to the government.”

He added, “There are multiple factors that caused the illiteracy rate to increase, including a shortage in literacy centers and the need for an educational infrastructure. In addition, the security, economic and social crises wreaked havoc in the country and the previous governments failed to assume an efficient role in this regard.”

In 1971, Iraq promulgated a law to combat illiteracy, which reduced the illiteracy rate to 20% by 1987, according to UNESCO. UNESCO, however, indicated that the halt of education programs for adults since 1987 had increased the illiteracy rate to nearly 30% in rural areas by 2018. Moreover, as a result of abolishing laws that the Revolutionary Command Council under the former regime had passed, a new law was enacted in 2011.

IHCHR member Faten al-Hilfi said that the law to combat illiteracy fell short. She pointed out that women made up half of the 18% of Iraqis who are illiterate and are unable to read or write.

Experts believe that IS control over large parts of Iraq is a significant reason behind the high illiteracy rate in the country, in addition to a shortage of educational institutions, lack of financial allocations and educational staff.

Illiteracy cannot be eradicated in Iraq as happened in the 1970s or 1980s, or at least reduced, unless the law is activated and target groups are getting paid to enroll. Access to job opportunities and participation in advanced educational programs once students have graduated from literacy centers could be among the incentives.