Syrian women who take part in craft workshops in Islahiye refugee camp learn new skills, earn some extra money and above all find a place of support. 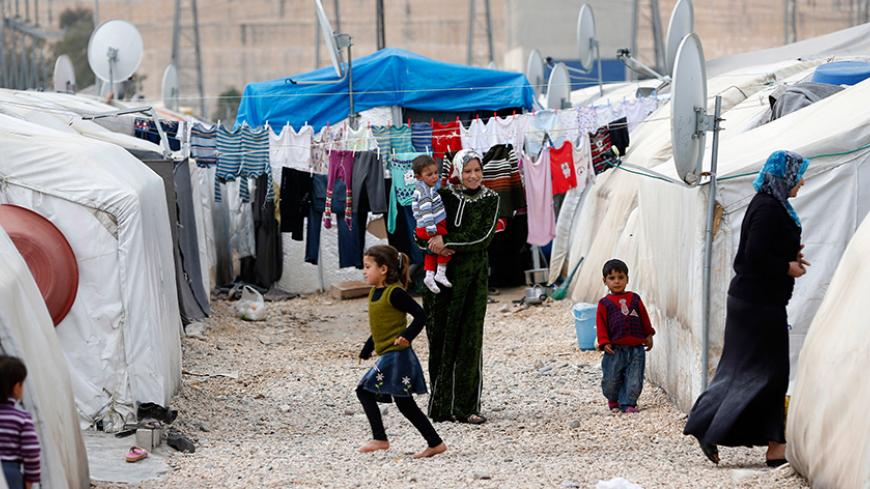 Syrian refugee women stand outside their tents at a refugee camp in Gaziantep province, near the Turkish-Syrian border, March 17, 2014. - REUTERS/Murad Sezer

ISLAHIYE, Turkey — When Maysa fled from Idlib to Turkey more than four years ago, she thought she would live in the refugee camp in Islahiye close to the Turkish-Syrian border only for a short period. But as the war raged on in Syria, the days turned into years. Although Maysa is grateful for all the help she receives from the Turkish government, she said that it is not easy to live in a refugee camp where one's life is put on hold.

"It is either really hot or freezing cold in the tent. Besides, we cannot find mental peace over here," Maysa, 40, told Al-Monitor on condition her last name not be used.

In Syria, Maysa's husband had a good job as a civil servant. But he hasn't been able to find work since arriving at the camp because his skills are not sought after in Turkey, where Syrians get menial jobs such as working in the olive fields. So when Maysa was asked three years ago to take part in a workshop to learn new crafts, she was happy to accept the invitation.

"Syria is so close, but we cannot go there. Just sitting here and waiting was frustrating. That's why I was happy to do something useful, to make some extra money and to educate myself," said Maysa, who emphasized that she did not know how to sew clothes before she came to Turkey.

A Turkish teacher taught the group of 20 Syrian women stitching, embroidery and how to make blankets and mend clothes. The clothes and blankets are sold in shops and bazaars in the city of Gaziantep and inside the camp. Not only did Maysa earn some extra money, the sewing club gave her something much more valuable.

Two years ago, Maysa’s son died at the age of 19. He had been a fighter with the Free Syrian Army and had stayed behind in Syria to fight the regime of Bashar al-Assad instead of fleeing to Turkey with his parents. One day, as he sat in his car in Aleppo, he was shot and killed by snipers from the Syrian government. Maysa was heartbroken.

"My son was buried in Syria and I couldn’t even be there to say goodbye to him. Until this day I have never been able to visit his grave. That hurts me a lot," she said.

Maysa started crying when she told Al-Monitor of how awful she felt when she realized she would never see her son again. The Syrian women at the workshop, sitting in a circle listening to Maysa, became very emotional; some also started to cry silently.

Although Maysa was devastated for months, she continued coming to the workshop, where she talked about her loss with the other women — some of whom had had the same experience — and found valuable support.

"Almost every Syrian in this camp has lost someone during the war. While we work, we talk about our losses, support each other and cry together when we feel down. Over the years we have become one big family," Esma, another participant, told Al-Monitor.

Around 2.7 million refugees live in Turkey, of whom 10% live in refugee camps. The Islahiye camp in Gaziantep region is home to 8,050 Syrian refugees, many of them from Idlib. Each refugee receives 85 Turkish liras ($30) per month to buy groceries. Roughly 2,700 children inside the camp go to school. The laundry of the camp's residents is done in large laundry halls, and shelter and electricity are free.

Every day, some 2,500 refugees go outside the camp to work, picking olives or grapes, depending on the season, Mehmet Avci, the director of the camp, told Al-Monitor. Yet most refugees find it hard to make ends meet. Islahiye camp also hosts single Syrian women and women whose husbands are not able to work.

Avci said, "Therefore, we find women’s participation very important and that's why we have different courses for women, such as knitting and sewing. Other Syrian women in this camp work by selling womens’ clothing in shops or work as hairdressers."

The sewing club is open five days a week, from 8 a.m. to 5 p.m. Women can come and go when it suits their schedules, as they often have children to take care of after school. Leyla Yildirir, the workshop teacher, told Al-Monitor that the club was initially intended to provide skills so that Syrian women could earn a living. Many of them did not have a job in Syria. However, over the years the sewing club has not only become a place of learning, but also a place of healing.

"The women learn how to make clothes and blankets, but they also learn how to deal with the stress of conflict and displacement. We did not plan this when we offered the course at first, but it has become one of our strengths. The sewing workshop is a haven for women. The same is true for other women’s courses in this camp," Yildirir said.

Yildirir described how she gives advice to Syrian women living inside the camp. They often cope with problems such as the loss of loved ones, domestic issues or war traumas. One of the women, Lydia, lost her father and her son in the war. It was a difficult time for her, but talking about her experiences to the other women made her feel better.

In this regard, Maysa said, "Sewing helped me forget my problems and gave me confidence. And to be honest, I don’t know what I would have done without my 'sisters.'"

The women told Al-Monitor that a few months ago, they saw many refugees leaving for Europe. When asked if they wanted to travel to Europe to build a new life there, all of them said they did not want to. In Islahiye camp, only a short distance from Syria, most of the people are still hopeful that one day they can go back to their homes. If they go to Europe, they will be even farther away from home, they said.

"When the war is over, I will be the first to cross the border to visit my son’s grave. Until that day comes, I wait," Maysa said.