Many women in displaced camps in northwest Syria have been forced to find jobs, often difficult and physical ones, due to the deteriorating security conditions and the absence of the family’s breadwinner. 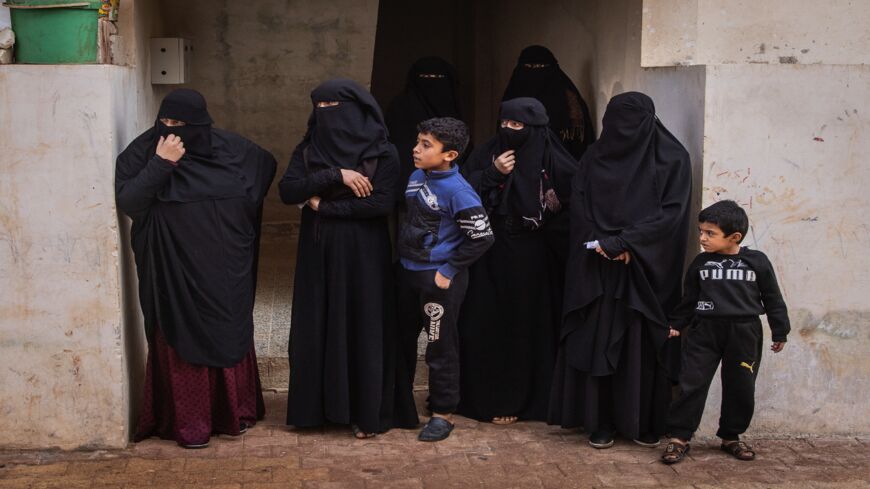 Orphan Syrian children and displaced widows wait for food aid to be delivered at the El Ardiye orphanage camp for displaced people run by the Turkish Red Crescent on the outskirts of Idlib, on Nov. 26, 2021, in Sarmada district, Idlib province, Syria. - Chris McGrath/Getty Images 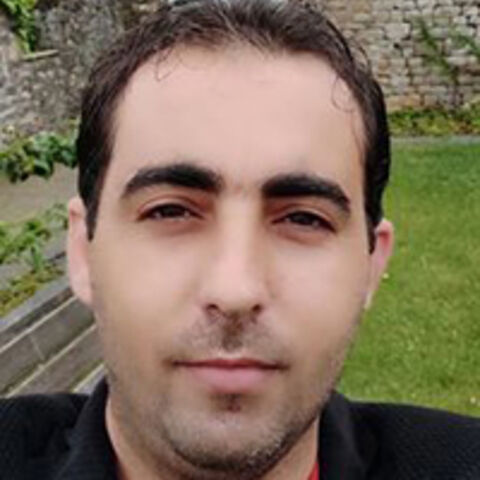 Years of war in Syria have left behind many widowed women who have been forced to become the breadwinners and enter the labor market despite not having educational or professional qualifications. Others whose husbands were injured or forcibly disappeared found themselves forced to work in difficult professions in exchange for a modest financial return that would secure their families’ basic needs of food and medicine amid poverty, lack of job opportunities, displacement and loss of the breadwinner.

“I did not expect that the harsh conditions would one day push me to engage in a profession reserved for men,” Karima al-Sheikh, 31, said as she mixed sand and cement to make bricks in a camp on the outskirts of al-Dana city in the northern countryside of Idlib.

“Since our displacement from the village of Kafr Nabudah in Hama countryside in 2019, I have been staying with my six children in this makeshift camp, which lacks all of life's requirements,” Sheikh told Al-Monitor.

She said her husband was arrested at a Syrian government checkpoint four years ago while he was headed to Damascus, and she still knows nothing about his fate.

“The high cost of living and the lack of humanitarian aid prompted me to search for a job to support my children. When I gave up on finding a job, I asked my brother, who owns a cement block workshop, to work for him there so that my children and I would not burden anyone,” she said.

Sheikh found the job exhausting. It caused her neck and back pain, but “poverty and seeing deprivation in the eyes of [my] children were tougher and harsher,” she added.

Sheikh explained how it works: “Every morning I go with two of my children, ages 9 and 11, to the workshop, and we start preparing the cement and sand blend by adding water to it, then we mix it well. I then pour a specific amount into the brick mold made of iron and press hard so that it takes the shape of the mold. I carry the block and put it under the sun to dry and spray it with water at intervals to gain strength and hardness.” She noted that she also loads bricks in transport vehicles.

“I receive 30 Turkish liras daily ($2.21), and the wage increases or decreases depending on production. The amount is hardly enough for us to secure the necessary living requirements,” she added.

Ilham al-Hassan, 32, who lives in a camp in Deir Hassan north of Idlib, was forced to work in a profession that is even difficult for men. She has to carry a shovel and break blocks of solid rock then turn them into smaller stones that can be used in construction.

“My husband is sick and unable to work. I break stones to earn a living and to support our three children,” she told Al-Monitor.

Hassan finds it very difficult to carry out her duties toward her children, and she sometimes has to take them with her despite her fear of their being injured by stone splinters.

Kawthar Haj Ibrahim, 27, works in an agricultural workshop with 15 other women to help her elderly father who is incapable of providing for her family of nine. Her job includes farming, harvesting, and loading and unloading bags of vegetables and fertilizers.

“We grow and pick vegetables and prune and clean agricultural lands from weeds. Sometimes we have to work in dangerous areas and lands close to the areas under the control of the Syrian regime. We are exposed to the dangers of bullets, mines and continuous bombardment,” Ibrahim told Al-Monitor.

She falls silent before adding, “We are afraid of the sounds of bombing and the possibility of death or injury, but we had to accept this dangerous and exhausting work out of need.”

She said that landowners prefer to employ women because of their low wages. For her part, she receives 25 Turkish liras ($2) per day for her work. She said the wage is very low and not commensurate with the effort and long working hours, but she has to soldier on out of need and lack of job opportunities.

Muhammad al-Saeed, a 35-year-old doctor from Idlib city, spoke to Al-Monitor about the dangers of hard work on women’s health. “Poverty and financial need push women to work in these professions, [as most] women have a weaker body build that is not commensurate with difficult [physical] jobs.”

He noted that work stress affects women biologically because women’s bones are smaller than men’s and their muscle mass is less than that of men. As a result, their bodies cannot tolerate physically laborious work.

Salam al-Kayyal, 34, a social worker from Idlib city, talked about the reasons that push women to pursue arduous professions that were reserved for men: “Due to the war in Syria, the subsequent killing, displacement, arrest and emigration of young people, in addition to divorce cases and many families’ loss of their breadwinners, not to mention the difficult living conditions, many women were deprived of their breadwinners, and the responsibility of taking care of their children and providing for them fell on their shoulders.”

Kayyal told Al-Monitor that hundreds of camps housing thousands of displaced people in northern Syria do not receive any humanitarian aid. This worsened their economic and humanitarian conditions and forced women to take on dangerous work in exchange for a small financial return that secures the minimum requirements for living.

Women in Idlib who do not have educational qualifications or capital are forced to work in difficult professions despite the risks they face in the workplace, in addition to the unfair wages weighed against the long working hours.

Kayyal pointed out that the employment of women in Idlib, especially the displaced, is not optional but is rather a reality imposed by the harshness of life, the high prices and the tough living circumstances. Therefore, many women prefer hard work over need and bitterness. At least it secures the family expenses through personal effort, she noted.

Kayyal added that as women take on these difficult jobs, their children, personal lives and health suffer. This shows in the psychological effects on women who were up against a great responsibility that they were not accustomed to bearing before.

She called on local councils and civil society organizations to provide support and assistance to all female breadwinners and protect their rights by offering them financial aid, training and rehabilitation, building their capacities and honing their skills. This would help them break free from poverty and need and would shield them from exploitation in the job markets, she added.