The lives of thousands of Syrian families in the Idlib camps lives turn into hell every year with the start of winter amid the lack of heating and rainwater drainage. 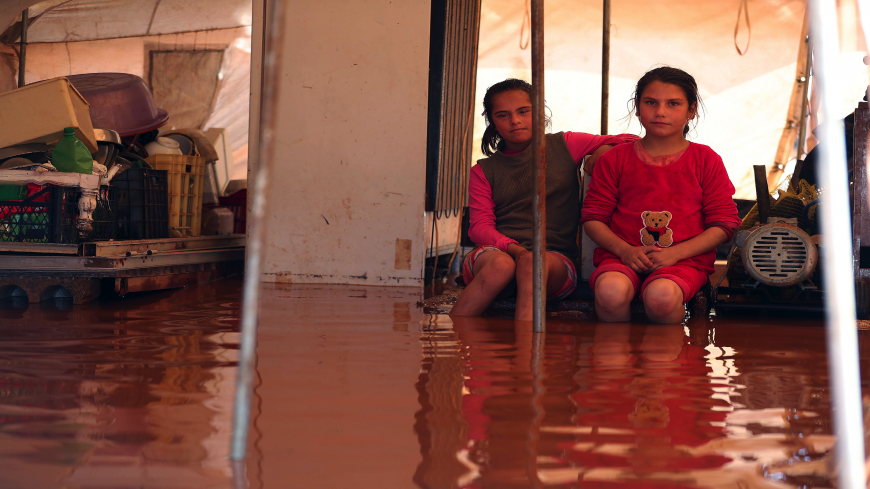 Two girls sit inside their flooded tent at the flooded Mukhayyam al-Khair camp near the village of Kafr Uruq in the north of Idlib province on Dec. 17, 2020, housing Syrians displaced from Saraqib and Maaret al-Numan, and following heavy rain in the previous days. - OMAR HAJ KADOUR/AFP via Getty Images)

IDLIB, Syria — On Nov. 25, the United Nations assessed the humanitarian situation in Syria, warning that the coming winter season will be “incredibly hard.”

Ramesh Rajasingham, the acting deputy UN Emergency Relief Coordinator, said, “More than 3 million people across Syria require assistance through what is likely to be an incredibly hard winter,” noting that those displaced remain “particularly vulnerable,” according to the official UN website.

Syria’s Response Coordination Group also appealed to the humanitarian organizations to contribute to securing the needs of the displaced in camps in northern Syria, after the flooding of about 23 camps in Idlib and the Aleppo countryside following the rainfalls on Dec. 15 that damaged many tents inhabited by dozens of families.

“We call on the humanitarian organizations operating in the area to shoulder their responsibilities toward the displaced in the camps,” the Response Coordination Group posted on Facebook on Dec. 15, noting that those same organizations bear the responsibility for not preparing for the coming winter disasters.

In the same context, the Syrian Civil Defense tweeted on Dec. 17, “Aerial photos show the flooding of several tents in the random camps in northern Idlib, following over 48 hours of rainfalls. The absence of proper infrastructure in the camps exposes them to floods after every rainfall, and the suffering of the displaced will not end until they return to their homes, from which the regime and its allies displaced them.”

Omran al-Ahmed, a 12-year-old Syrian child displaced from the southern countryside of Aleppo, lives in the Atma camp in the Idlib countryside on the border with Turkey. “I neither want nor like rain; I dread seeing dark clouds because I know disasters will befall us, such as the road being cut off and not being able to go to school. I love the sun not only because I like it, but because I fear winter, the cold and the wind that it carries. We cannot even have access to bread when it rains because the road is cut off, and I would have to struggle under the rain and in the mud to go get bread.”

He added, “I would also have to wait for days before I can play again because the ground takes forever to dry and because of the large holes that retain rainwater for several days. Winds also scare me; they make our tents go left and right and almost uproots them from the ground, so we do not get much sleep. On rainy days we live in darkness since our solar panels do not charge.”

Ahmed noted, “My dream is to go back to our house from which we were forced out of five years ago; I can still remember some of its details. I always dream of a house whose roof is made of cement, not of cloth, as is the case with a tent.”

Fatima Umm Mohammed, 40, from Al-Lataminah in the Hama countryside, who is displaced in the Al-Lataminah camp in Idlib countryside near the border with Turkey, told Al-Monitor, “The organizations do not provide us with heating, so we collect cardboards from garbage and turn plastic containers into fuel to keep warm. No one helped us drain the rainwater that flooded our tents. My six children and I live in one tent, and we have no breadwinner. My husband was killed in a raid by the regime's warplanes two years ago. It is up to me to tie the tent up when the wind blows and place stones on all sides so it stays up.”

Umm Mohammed added, “We receive a food basket every month that costs about $20, which is our monthly income, in addition to some aid from some people who give us charity sometimes. We also cook food on plastic surfaces since we do not own any gas cylinder [stoves] because they cost $9. We also use dry dung fuel for heating because we cannot afford heating fuel.”

Ali Salman, 67, a displaced person from the city of Saraqib who lives in the Saraqib camp in the city of Dana in the Idlib countryside, told Al-Monitor, “We suffer from the lack of paved roads; we have dirt roads, so they turn into piles of slippery mud when it rains. The elderly cannot walk in the mud because they could slip and break something. Water floods the tents carrying all sorts of garbage during the winter, and the sewage carries all sorts of bugs during the summer.”

Salman added, “We do not even have proper toilets, and when we build any, they quickly fill up and result in unpleasant odors and diseases such as leishmaniasis, among others. My grandchildren and I live in two small tents, and we suffer from a lack of aid. My sons working in Turkey send us some money, but families who do not have workers outside Syria live in extreme poverty. Here there is no work at all, and if anyone happens to find a job, the pay is 4$ for an eight-hour working day.”

In this context, Abelsattar Kriwi, a humanitarian activist in the Idlib countryside, told Al-Monitor, “The difficulties facing the camp residents are the lack of adequate shelter, as the tents do not protect against the cold of winter or the summer heat, and they are primitive housing that is not suitable for humans. The tents do not protect them from the wind and the cold; it is as if they are living outdoors, not to mention the floods.”

Kriwi added, “Relief organizations provide emergency baskets, some heating materials and other supplies. Displaced people only rely on these organizations to survive, but the aid does not cover their basic needs. Every year the situation worsens in the camps since there are no real projects to secure the needs of the people. Small projects for some camps are not enough.