20 women making soap in Idlib hope to expand their factory and increase their production in a bid to improve the living conditions of their families, which they provide for after losing their husbands in the Syrian war. 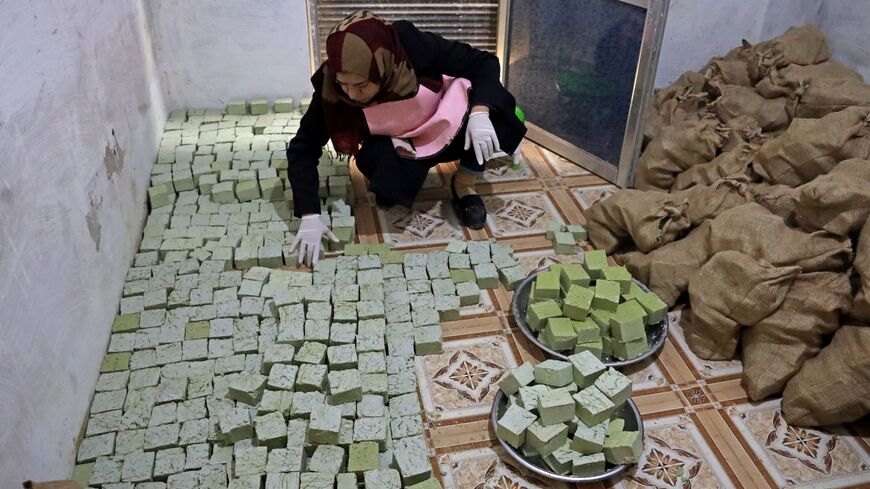 A Syrian woman sorts bay leaf soap that she and a group of fellow widows prepared at an artisan workshop to support their families in the rebel-held town of Maarrat Misrin in the northern countryside of Idlib governorate on Dec. 13, 2021. - MOHAMMED AL-RIFAI/AFP via Getty Images

ALEPPO — The Syrian war, which has been going on for almost 10 years, forced a large number of Syrian women to lead their families after the detention or death of their husbands. The absence of the traditional family provider prompted many women to learn jobs that were previously limited to men.

Idlib governorate, which is under the control of Hayat Tahrir al-Sham in northwestern Syria, has turned into a destination for those opposing the Syrian regime, especially women, whose number rose due the displacement waves caused by the regime.

The new and harsh life forced women in Idlib to enter the labor market. While some found work in kindergartens and humanitarian organizations, those who did not hold any academic degrees were forced to work in agriculture for a daily wage. Others learned a profession to make ends meet.

In Maarat Misrin, a town just north of Idlib city, family breadwinners among women came up with the idea of opening a soap-making workshop in early 2021. The idea turned into an important project that involved 20 women and that bears the name of Olfar Soap making company.

Mariam Daeef, who lives in Maaret Misrin in Idlib countryside, is one of the women working in the soap factory. She is a widowed mother to five children. She told Al-Monitor, “None of us in the soap-making company have academic degrees that would enable us to get jobs in education or any other sector. We needed a project that suits our skills and allows us to cover the costs of living.”

The project in Idlib seemed feasible, given that the main raw material is olive oil. The Idlib governorate is known for producing this type of oil and the making of soap. A large segment of the workers have extensive experience, which they inherited from their ancestors.

Locally made laurel soap is a basic commodity in every house in northwestern Syria. It is used primarily for body and hair wash, and is a natural product that does not harm the hair nor the skin. The women have successfully marketed the product in the opposition areas in Idlib and the northern Aleppo countryside.

Fatima Chahine, director of the soap-making company who resides in Maarrat Misrin, told Al-Monitor, “Soap-making is considered a heritage, and anyone can do this job and learn it quickly, once they have the necessary equipment.”

She added, “We turned a rented house into a workshop where we make soap. It is a handcraft that does not require great effort. As women, it was necessary for us to choose a job that suits our physical capabilities as well as the customs and traditions of the local community.”

Soap is made in three stages, she explained. First, oil, water and sodium hydroxide are cooked for an hour and a half. Next, laurel oil, water and salt are added to the mixture and cooked again for an hour and a half in order to get rid of the sodium hydroxide after it fulfills its role. Finally, there is the cooling, cutting, packaging and selling.

The 20 women in the factory are mostly survivors from other governorates who were released years ago from the prisons of the Syrian regime, she said. The women are divided into two groups, each working a three-hour shift.

The business hopes to expand, Chahine said, because "the current income is barely enough to cover the living expenses of their families due to the high prices and the difficulties in securing raw materials.” However, she did not  reveal how much they are paid per month.

Hoda Rayya, one of the workers, lives in Maarrat Misrin and is a former detainee in the regime’s prisons. Her husband is dead and she provides for her family. She told Al-Monitor, “Soap making is the profession that I chose and I started to love. It all started when the opportunity presented itself. I received the training for twenty days, and once the decision to open the factory was made, I agreed and expressed readiness to join.”

Women's initiatives are on the rise in the local community in northwestern Syria. A group of women announced in April the opening of a mobile phone maintenance center in Idlib, after a group of women received two months of training.