Women face all sorts of rights’ deprivation in northwest Syria, and this has appeared most recently in Hayat Tahrir al-Sham’s moves to ban married women from enrolling in schools. 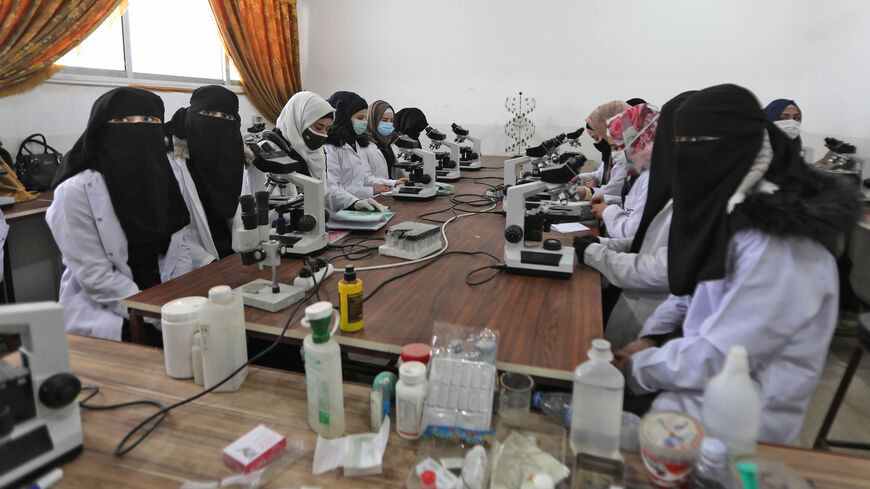 Women in Syria’s northwestern province of Idlib face daily violations of their rights at the hands of Hayat Tahrir al-Sham (HTS), which controls the province. The group’s members have been repeatedly accused of violations and restrictions against the people of Idlib.

Most recently, married women have been deprived of their right to education, sources from Idlib schools told Al-Monitor. Multiple principals in Idlib said that on Aug. 15, the Education Directorate of the Salvation Government, HTS’ civilian arm, informed them orally of a decision to ban married female students from attending public schools and universities.

The move deprives dozens of married women of their basic rights to education and to continue their studies, as part of HTS’ systematic policy of tightening the noose on residents of Idlib province.

All attempts by Rawan al-Atrash, from Binnish city in the countryside of Idlib, to be admitted to school and fulfill her dream of becoming a teacher in the future were unsuccessful.

Atrash, 16, told Al-Monitor, “I am one of dozens of married students who were deprived of education in Syria because of the decisions of the Education Directorate of the Salvation Government to prevent married female students from pursuing their studies.”

On a more personal level, she said that her father forced her to drop out of school when she was in sixth grade because she was his eldest daughter and had to help her mother and learn sewing, cooking and housework in order to get married.

When she turned 14, she was coerced by her family into marrying her cousin. After two years of marriage and a child and another on the way, her husband agreed to her completing her education in ninth grade. However, she was surprised by the refusal of the school administration in Binnish to admit her. She did not disclose the name of the school out of fear for her personal safety.

Shortly after, her married friend Aisha told her that several married students had been rejected at the same school, and they had been given the same reason by the school principal — that there were no spots available.

Atrash said that denying her the possibility of completing her education deeply affected her, especially as the first rejection came from her family at a young age. Once she had convinced her husband to allow her to pursue her studies, since the school was nearby and all her married friends would be in the same class, she was rejected by the Education Directorate.

In 2019 statements, Mahmoud al-Maarawi, the first Sharia judge in Damascus, who heads the religious court that oversees personal status issues in Syria, said that the percentage of underage marriage during the Syrian war rose to 13%, compared to 3% before the war. Most marriages were concluded as per customary contracts, according to Maarawi.

Speaking to Al-Monitor, Raghad al-Jassem, a 19-year-old woman from Idlib, said she was deprived of her right to education, which would have helped her become more independent and self-sufficient.

She was unable to continue her studies after her husband was killed two years ago during battles with HTS in Idlib’s countryside, as she was forced to drop out of school and tend to her family.

This year, she decided to go back to school. But although she is not technically married, but rather a widow, she is trying to hide her status at the Education Directorate through her inside contacts to circumvent the recent decision, and be able to finish her high school studies and achieve her dream of becoming a nurse.

Jassem described HTS’ recent efforts as unjust and arbitrary, adding that there is no article or clause preventing married women from education in the Syrian Constitution, Syrian laws or even in Islam.

For years, the education sector in Idlib and its countryside has been suffering from great difficulties that have encumbered thousands of male and female students from education.

On the other hand, a school principal in Maarrat Misrin, in the north of Idlib, told Al-Monitor that she was recently asked by the Education Directorate of the Salvation Government not to enroll married female students in public schools that are affiliated with the directorate.

The source, who asked that her name and the name of the school not be published due to safety concerns, said that the decision was not in writing, but it was verbally mentioned to her.

She said that she was told she would be held accountable if any married student is enrolled at her school, and she would be punished.

She noted that the decision applies to all schools in Idlib and its countryside that are affiliated with the Education Directorate.

The school principal said she was also asked to tell married women seeking education that there are no available spots.

The source said she is personally implementing this mandatory decision, as she believes the most suitable place for a woman is her husband's house and raising her children. She noted that a married woman would take the place of another student because she would have to suspend education during pregnancy and childbearing for an extended period, and that would deprive an unmarried student of the spot.

She said that the way unmarried and married female students think is totally different, especially when it comes to marital conversations in school. This might affect other girls’ thinking.

She concluded by saying that, as a school principal, she believes the decision is correct, and any married woman should abide by it and by her husband’s opinion completely.

An Idlib-based activist who spoke to Al-Monitor on condition of anonymity said that banning married women from enrolling in public schools is arbitrary and unjust, amid lack of justifications, except for HTS’ control of the area and its systematic crackdown on citizens and education of women, married or unmarried, but mainly the married ones.

Women have bigger responsibilities and burdens, and education can boost their self-confidence and empower them to interact with others and with society, she said, adding that depriving women of education negatively affects their lives, weakens their character and robs them of economic independence.

HTS is trying to completely control the education sector in Idlib and indoctrinate students with its ideas and beliefs by luring them to its religious schools and offering them benefits.

In February, teachers who volunteer at schools affiliated with Idlib and Hama education directorates closed schools until they have paid their outstanding wages, as part of a general strike. Teachers in Idlib, who were forced to work as volunteers after years of unpaid salaries, had been protesting in recent years the deteriorating conditions of schools in Idlib. But their demands continue to fall on deaf ears.

Correction: Sept. 6, 2022. An earlier version of this article indicated that HTS had issued a decision to ban married women from studies. Rather, teachers and school administrators say they have been given verbal instructions in this regard.