Hayat Tahrir al-Sham in Idlib has ended the work of its security apparatus that has been accused of controlling people’s lives. 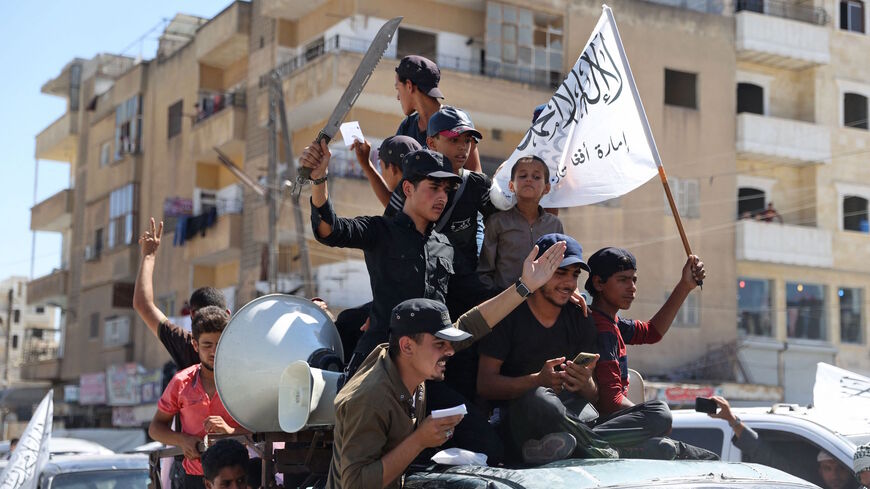 Members of Syria's top jihadist group the Hayat Tahrir al-Sham (HTS) alliance, led by al-Qaeda's former Syria affiliate, parade with their flags and those of the Taliban's declared "Islamic Emirate of Afghanistan" through the rebel-held northwestern city of Idlib on Aug. 20, 2021. - Omar Haj Kadour/AFP via Getty Images

Hayat Tahrir al-Sham (HTS) has ended the work of Al-Falah apparatus, which it launched in May 2020 as part of the religious police apparatus — Hisbah — that it established in 2014, the Syrian Observatory for Human Rights reported Sept. 3.

Al-Falah apparatus is tasked with monitoring markets and forbidding the mixing of men and women among other functions, to impose its control over the smallest details of the people’s daily lives. This apparatus continued to harass the population until it was recently suspended, following popular protests against it for interfering in the people’s personal lives and imposing many restrictions on them.

According to an analytical reading prepared by the Istanbul-based Jusoor Center for Studies, Al-Falah apparatus consists of several offices: Women's Patrols Office, Mohtasiboun, Executive Force, Judicial Office and Complaints and Follow-up Office. Its members have absolute authority, such as arresting and holding perpetrators of legal violations accountable, and its actions range from advising to using direct force under the principle of “the duty of enjoining the good and forbidding the evil.”

One of Al-Falah’s most prominent tasks is to prevent men and women from mixing in public places by erecting control points on university campuses and in parks, preventing men from selling women’s clothes, banning the display of mannequins at shops, monitoring wedding halls and banning music and smoking. In addition, it is known to interfere with women's clothing and accessories and forcing humanitarian organizations to separate their staff by gender.

The director of public relations in HTS’ affiliated salvation government, Mulham al-Ahmad, told Al-Monitor, “In conjunction with terminating the work of Al-Falah, HTS started forming an alternative apparatus under the name of the ‘moral police.’ It will be affiliated with the salvation government’s police institutions, and its tasks will be limited compared to Al-Falah’s.”

He noted, “It will focus on moral issues and refrain from interfering in the details of the lives of civilians. It will have a civilian capacity to solve conflicts within the community, which is part of the salvation government’s measures to govern various fields in the areas under its control. Al-Falah has played its role throughout the last phase. Now, these measures are in accordance with the new plan drawn up by HTS.”

Ending Al-Falah’s work comes as part of a series of changes that HTS is gradually making within the framework of opening up to the outside world and marketing itself as a legitimate opposition group and ruler of Idlib, with whom partnerships and understandings can be built.

However, it seems that HTS is forced to form the moral police in order to satisfy the extremist current within it, which does not accept many of these new changes.

Muhammed el-Sukkeri, a researcher at the Jusoor Center for Studies, told Al-Monitor, “HTS focuses on rearranging its house through its government institutions and is working in an organized manner because it realizes that its militaristic character and the way it manages Idlib according to its ideologies could never allow it to make it on the regional and international scene.”

He said, “HTS has thus started paying more attention to its civilian authority in an attempt to find tools to help deal with the international community, especially after bringing in aid, which is an important step for HTS.”

Sukkeri noted, “HTS’ desire to be part of the political process — to have a foothold in the future Syria and to enter the Syrian parliament — prompted it to reconsider its previous policy and work to showcase itself as a civilian authority, so as to persuade the West to allow it to play its role and represent Idlib. However, ending the work of Al-Falah and forming the moral police can be a mere change of name.”

The Hisbah apparatuses have a long record of violations against civilians, most notably the attacks on girls in the Idlib city market in June 2017. In addition, a female preacher once beat up the director of exams at Idlib University due to a dispute over her outfit. Bus drivers affiliated with the  nongovernmental Violet Organization were arrested, and teachers and students of Al-Orouba High School, the Pythagoras Institute and the Center for Development and Technology were beaten up, all under the pretext of men and women mixing. These apparatuses have also carried out floggings, against the perpetrators of Sharia violations.

The chairman of the Syrian Network for Human Rights, Fadel Abdul Ghany, condemned the extremist practices of the Hisbah apparatus in Idlib.

“These apparatuses impose restrictions on the population in the areas under their control, interfering in personal affairs and freedoms, according to their hard-line ideology. They beat up civilians, arrest them and force violators to pay fines. They violate basic rights provided by international human rights laws,” he told Al-Monitor.

He added, “Through these apparatuses, HTS is trying to control society to fully comply with its ideology. The international community should help Syrian society get rid of extremist organizations by taking serious steps according to a specific and strict timetable to achieve a political transition toward democracy that guarantees stability and human rights.”