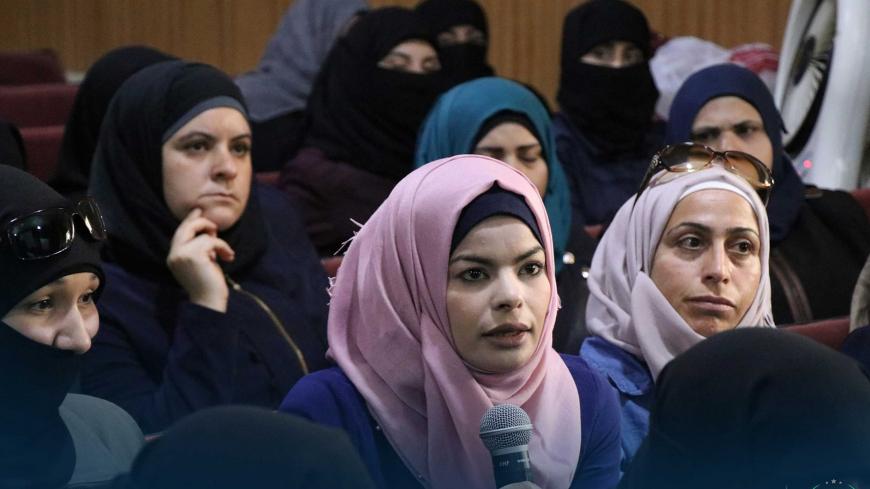 Attendees of the General Women’s Conference for the Support and Empowerment of Women, Azaz, Syria, July 25, 2018. - Facebook/stabcommittee

ALEPPO — The General Women’s Conference for the Support and Empowerment of Women in the Aleppo Euphrates Shield area, which is under the control of the Free Syrian Army (FSA), convened July 25 in Azaz — a city in Aleppo's northern countryside.

The conference, which gathered more than 150 Syrian women working in various service and humanitarian sectors in the area, was organized under the auspices of the Stabilization Committee, affiliated with the Free Aleppo Governorate Council. Representatives of the Syrian Interim Government were also present at the conference, which also hosted several female activists coming from the cities of Gaziantep and Kilis in Turkey.

The conference resulted in the creation of a new organization for women's political, social and economic empowerment in Syria's opposition-held areas.

Activist Nivin Hotary, a member of the women’s group affiliated with the Stabilization Committee, told Al-Monitor that the conference brought together women from all over Syria, including many displaced from areas such as Deir Ez-Zor and eastern Ghouta now living in the Euphrates Shield area.

“Women attended the conference to emphasize that they can have an active role in society and are able to represent themselves and participate in various social and political sectors. The conference addressed the most important challenges and problems faced by Syrian women in the opposition-held areas and ways to overcome such challenges, as well as means to achieve participation in society and take on political roles,” Hotary said.

She went on, “The outcomes of the conference included the formation of a civil society organization dealing with the affairs of women, defending their rights and empowering women politically, economically, socially and culturally so they become able to participate in decision-making. The organization also aims to establish strategic projects to further promote women’s roles in society, launch community integration programs and organize training workshops to hone women's skills.”

Syrian women played a major role in the Syrian revolution, which they saw as an opportunity to resist the restrictions imposed on them and restore their rights. Women participated alongside men in the protests and were prosecuted by the security services.

Many of Syria's women were left on their own to face major hardships after their husbands were killed, arrested or left disabled. They were often forced to become the breadwinners for their families and look after children alone.

The opposition-controlled areas, especially in the countrysides of Idlib and Aleppo, have witnessed major changes in women's activism since early 2013. Several organizations and associations concerned with women's rights and empowerment were established to help them such as the Barkat Amal (A Glimpse of Hope) organization, the Women Now center in Maaret al-Naaman, Space of Hope Organization, the Educated Women's Association and the Syrian Women's Gathering.

Local councils established offices for women’s affairs such as the Council of Free Aleppo Governorate's Office for the Protection of Women and Children and the Women and Child Care Office in Jabal al-Zawiya in Idlib.

Women’s rights activist Fatma Saadi, director of the Azaz Women Support and Empowerment Authority, told Al-Monitor, “The organizations and associations that emerged in the opposition-held areas in northern Syrian in the past years have focused primarily on programs to support women economically such as sewing and beauty services training, literacy programs, language courses and handicraft programs, which help women to secure jobs. Many women have had to provide for their children without help from men.”

Saadi added, “Women have found some success in promoting themselves in a conservative society and have built a strong presence in the local councils in Idlib and Aleppo. But they need much more social care and legal and civil education to be able to reach leadership positions, especially in the political sphere.”

The participation of women in local councils remains largely limited to positions in the civil registries and in administrative offices like the Diwan. They still make up only about 10% of their staff, according to the local council members Al-Monitor visited in the northern Aleppo countryside.

Salam Bakour, a teacher in a school in the city of al-Bab, is unimpressed. She told Al-Monitor, “The training sessions and programs for women's empowerment in the opposition-held areas are just for show and do not benefit women on the ground. They end up taking photographs with the name of the organization and institution in the background, and promises of job opportunities are unfulfilled. I think we are merely a tool for the owners of these organizations to make money, as they charge for the courses and programs we take.”