Syrians celebrate 10 years of revolution, committed to their goal

Syrians celebrate the 10th anniversary of their revolution, and reiterate their demands for dignity, freedom and changing the current regime. 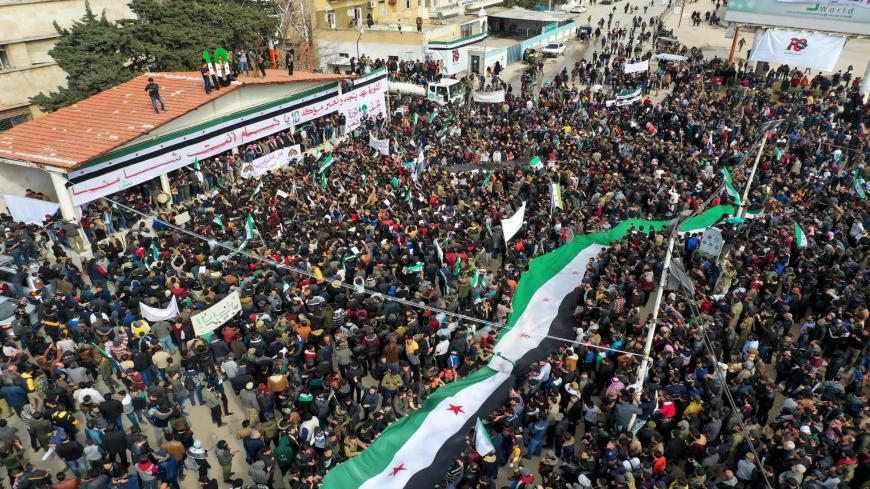 An aerial picture shows Syrians waving the opposition flag during a gathering in the rebel-held city of Idlib, as they mark 10 years since the nationwide anti-government protests that sparked the country's devastating civil war, Syria, March 15, 2021. - Omar Haj Kadour/AFP via Getty Images

ALEPPO, Syria — It is unclear where the political path for Syria is leading. With a divided opposition and a government still in power and surrounded with allies, it is clear that the country’s instability will persist longer, causing more damages and civilian suffering. Yet for the 10th anniversary of the Syrian revolution,  the opposition-held areas in northwestern Syria celebrated the 10th anniversary of the revolution — originally ignited on March 18, 2011, in the southern governorate of Daraa — in a festive atmosphere. Hundreds of thousands of civilians took to the streets across these parts, affirming from the freedom squares that their journey persists.

The preparations for the demonstrations and festivities began a few days before the anniversary date in many cities and towns that the Syrian regime does not control. The revolution’s banners filled the squares in the cities of Idlib, Azaz, al-Bab, Dana, Jisr al-Shughour and others.

On March 15, thousands of civilians gathered in Idlib's Sabaa Bahrat Square, and celebrated the 10th anniversary of the revolution in a mass demonstration as thousands of demonstrators from across the Idlib countryside joined the square. The participants’ chants demanded freedom and justice echoed throughout the city where the revolution’s flags were raised including a large one in Idlib city center. The demonstrations and celebrations reached other towns in the Idlib countryside. Hundreds of people gathered in Martyrs Square in the southern city of Jisr al-Shughour, chanting for freedom, as well as in Kafr Takharim and Sarmada.

Speaking to Al-Monitor, Houda Nasrallah, a civil society activist celebrating the revolution’s anniversary in Idlib, said that the events and demonstrations celebrating the 10th anniversary of the  Syrian revolution remarkably show that the Syrians remain determined and committed to the top goal of bringing down the regime. She said that the real motive is the people’s total belief in the value of dignity and freedom. “Ten years later, our chants are still the same; the people want to bring down the regime,” she added.

Mohammad al-Hassan, a displaced man from Deir ez-Zor countryside based in Idlib, told Al-Monitor, “We are here to celebrate the 10th anniversary of the Syrian revolution, and to say that we renew the pledge a decade later. We will continue to fight for our freedom and dignity, and to prove to the regime that we are still the same as we were 10 years ago.”

Al-Monitor was present at the demonstrations in Aleppo countryside. Thousands of Syrians gathered in Azaz’s public square and city center, and chanted the revolution’s songs and slogan that “the people want to bring down the regime.” There were multiple events and activities celebrating this anniversary in the city such as the speeches at the liberated area's University of Aleppo that officials of the National Coalition of Syrian Revolutionary and Opposition Forces attended. Al-Monitor was also present at the demonstrations in Akhtarin where the demonstrators sang for the martyrs and the homeland.

Similar demonstrations were also held in al-Bab, Afrin, al-Rai and Bizaah in Aleppo countryside. Syrians from all walks of life joined the demonstrations, chanted against the regime and demanded the release of the detainees. Men, women, children and the elderly, and displaced and local residents took part in the demonstrations.

Speaking to Al-Monitor, the defense minister in the Syrian opposition's self-styled interim government, Maj. Gen. Salim Idris, said, “On the 10th anniversary of the freedom and dignity revolution, we renew the pledge to carry on the revolution's path until our demands are met, and [to say that] nothing will stop us.”

He continued, “Our participation in the mass demonstrations held in the liberated areas showed us that the Syrians have become more committed to their demands and to their struggle for freedom and justice in the 10 years since the start of the revolution.”

At the demonstration in Azaz, Al-Monitor spoke to journalist Raafat Junaid. He said, “Although a decade has passed since the revolution was ignited, the Syrians still hold onto their revolution and the demands they protested for.”

Speaking to Al-Monitor at the demonstration in Akhtarin in Aleppo's countryside, Ismail Mahmoud, a civil society activist hailing from Dabiq in Aleppo countryside, said that the revolution should continue “in honor of the thousands of detainees incarcerated in the regime’s prisons, the hundreds of thousands of martyrs and millions of displaced Syrians and refugees. The demands for freedom and justice have become more pressing after 10 years.”

Abdul Hakim al-Masri, minister of finance and economy in the opposition-led interim government, told Al-Monitor, “The same demands are raised in the celebrations marking a decade since the Syrian revolution, which a lot of people have bet on. The demonstrations on this anniversary reflect the Syrians’ determination and persistence.”

Journalist Mohamed Nour told Al-Monitor, “The demonstrators’ enthusiasm has remained the same as they were 10 years ago. It is the great revolution.”

Salwa Mohamed, a civil society activist in Afrin in Aleppo's countryside, told Al-Monitor, “The mass demonstrations in our liberated areas in northwestern Syria are the largest in several years. The Syrian revolutionaries are here to renew the pledge to their demands for freedom and for bringing down the regime, restoring the revolution’s peaceful spirit that the regime has tried to end for years. The free people’s message from the square is that we are still committed to our demands from which we do not derail — no matter how high the price is.”

Several international organizations spoke about the 10th anniversary of the Syrian revolution. They called in their statements for ending the ongoing war and holding accountable the perpetrators of violations against the Syrian people. The international position on the Syrian war is clear: The war must end. The means are still being debated.