Tensions escalated on the Idlib front in the wake of the Astana talks held in Tehran as Russian airstrikes killed several children. 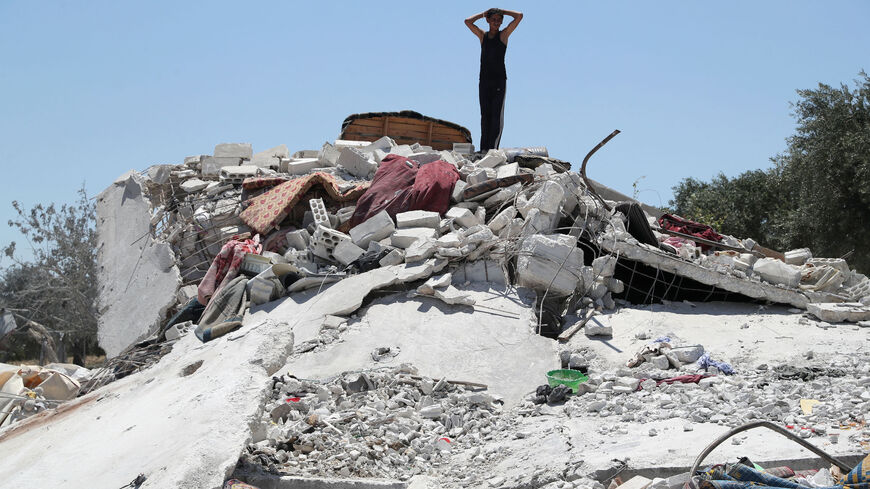 A young Syrian gestures above debris following a Russian air strike on the outskirts of the rebel-held city of Jisr al-Shughur in Syria's northwestern province of Idlib on July 22, 2022. - OMAR HAJ KADOUR/AFP via Getty Images

On the morning of July 22, Russian warplanes struck a house on the outskirts of the town of al-Jadida in the Jisr al-Shughur countryside, killing seven people including five children and wounding more than 12 others, mostly women and children.

The Syrian Civil Defense, also known as the White Helmets, tweeted July 22, “Seven civilians, including four children from one family, were killed, and 12 others, including eight children, were injured. The Russian military struck a poultry farm inhabited by displaced persons on the outskirts of al-Jadida village and civilian homes on the outskirts of al-Janoudiyah village in the western countryside of Idlib."

The White Helmets and local rescue networks published photos and video showing the destruction caused by the recent Russian strikes as well as the efforts to extract those trapped under the rubble.

The attacks sparked widespread condemnation from international rights groups. UNICEF's MENA representative Adele Khodr said in a July 22 statement, “At least five children were killed and nine injured in the west of Idlib, in the northwest of Syria in an attack early this morning.”

The latest Russian attack coincided with artillery and missile shelling by the Syrian government forces on the south Idlib village of al-Mazraa, which suffered material damage but no loss of lives.

Speaking for the National Front for Liberation, which is affiliated with the Free Syrian Army (FSA), Capt. Naji Mustafa told Al-Monitor, “After the Russian occupation committed the brutal massacre in Jisr al-Shughur, the artillery and missile regiments of the National Front for Liberation responded immediately by targeting positions of the Assad regime forces and their supporters in the countryside of Latakia, Hama, Aleppo and Idlib."

He went on, "We sent a message to the regime and its supporters reminding them that we are always ready to fight back, and we will defend the people and protect the land.”

Syrian activists organized vigils in a number of cities including Azaz, al-Bab, Afrin and Ariha. The protesters called on the leaders of the opposition factions to avenge the victims of the Russian attack and raised banners denouncing the Astana process, whose sponsors Turkey, Russia and Iran recently held a summit in Tehran.

Opposition circles in northwestern Syria fear the escalation may be a prelude to a large-scale military operation by the government forces.

In Idlib over the past few days, fighters backed by Iran and Russia have reinforced their positions in areas under the control of the government forces.

On July 20, the Russian Defense Ministry announced that its forces shot down two drones near the Russian Khmeimim airbase in the Latakia countryside. No casualties or damage was recorded.

The Russian news agency Sputnik quoted a spokesperson for the Russian forces in Syria as saying that the drones came from the northeast, from a distance of two kilometers.

FSA leader Col. Mustafa Bakour told Al-Monitor, “The massacre committed by the Russian planes in the Idlib countryside is a message to Turkey after the failed Tehran summit. The idea is that Russia is determined to finish what it started in 2015 in its quest to restore all lands outside of Assad's control. Russia, in other words, will continue to target the areas where the factions are present and confront Turkish forces. The Russian massacre and the escalation on the Idlib front after the Tehran summit are evidence of the lack of consensus between Russia, Iran and Turkey.”

Muhammad al-Sukari, a researcher on Syrian affairs based in Gaziantep, told Al-Monitor, “The Turkish deployment of military reinforcements to Idlib is a clear indication that the Tehran summit did not satisfy Ankara. The Russian shelling of opposition areas and the escalation from both sides only confirm the lack of consensus. Meanwhile, warnings continue to be sent about the imminent Turkish military operation against the Syrian Democratic Forces.”

Sukari added, “The recent movements of the regime forces on the Idlib front and the deployment of Iranian and Syrian regime forces are supported by Moscow. They are part of the pressure strategy practiced by Russia, the regime and Iran on Turkey. They are warning messages to Ankara saying that any Turkish military operation in the area will lead to the collapse of the cease-fire agreement that was reached in Idlib” in 2020.