Osama al-Rifai, head of the Turkish-backed Syrian Islamic Council, was criticized by secular opposition figures for his recent remarks about Syrian women. 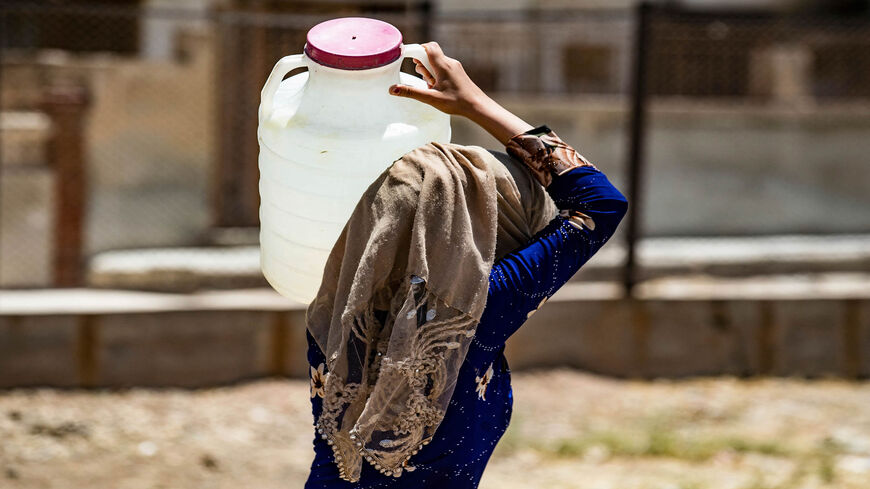 A Syrian woman carries a container of water provided by UNICEF in the northeastern city of Hasakah, after disruption in water supply from the Alouk station, Syria, July 8, 2021. - Delil Souleiman/AFP via Getty Images

ALEPPO, Syria — The visit of the head of the opposition Syrian Islamic Council (SIC) to Azaz, which is under the control of the Turkish-backed Free Syrian Army (FSA) in Aleppo countryside in northwestern Syria, sparked a wide debate among Syrians due to the statements that the sheikh made as part of his sermon in one of the Azaz mosques.

On Aug. 5, Osama al-Rifai, head of the SIC, arrived in northern Aleppo countryside from Turkey, in coordination with the FSA-affiliated Sham Front. Rafei met with officials in civil associations and factional leaders and visited the University of Aleppo in the opposition-held areas. He also laid the foundations of the SIC building in Azaz, which is now home to the headquarters and offices of most Syrian opposition associations, including the Syrian National Coalition and the Ministry of Defense in the opposition’s Syrian Interim Government.

On Aug. 7, Abo Ahmad Nour, head of the Sham Front, tweeted, “We are honored to receive His Eminence Sheikh Rifai, head of the SIC, and the honorable trustees of the council. It is a blessed step taken by the distinguished gentlemen to strengthen the link between the institutions of the military and civil revolution and their authority represented by the council.”

An SIC official told Al-Monitor on condition of anonymity, “The visit aims to strengthen the role of the Islamic Council as an authority in opposition areas. The council will have its permanent headquarters in Azaz and will work to increase cohesion and communication with decision-makers to improve the situation in these areas and strengthen the work of the committees that seek reform and redress grievances.”

He said, “The Turkish government wants to move the opposition areas from a state of chaos and rampant insecurity to a state of stability and support for institutions. This desire appeared with the transfer of the headquarters of the interim government and the coalition from Turkey to the countryside of Aleppo. There is now an attempt to provide a religious cover through the SIC, which is supposed to bear the religious and historical responsibility to confront the ideology of extremism, in addition to withdrawing religious legitimacy from the sheikhdom of the regime.”

In his sermon at Azaz Grand Mosque, which sparked controversy, Sheikh Rifai said that some Syrian women have become recruits of the United Nations and international organizations under humanitarian, relief and training covers to spread ideas about women’s emancipation.

He added, “There is a pronounced crowd of colonialists, infidels and misled people in the West, and they mobilized armies to divert young people from their values ​​and their upbringing. Did you know that there are women from our own country who come as recruits from the UN and other infidel organizations to spread ideas of what they call women’s emancipation and so-called gender under the slogan of empowering women and granting them freedom? They tell women that they are enslaved to their husbands, fathers or elder brothers, and ask them to ignore them and take their freedom. They then leak to them misguided ideas, nudity and everything that goes outside the circle of Islam. These are recruits from the West who are here to corrupt our women.”

Islamic researcher Joma Lhep told Al-Monitor, “A group of Syrian opposition members attacked Sheikh Rifai because of his statements during a sermon he delivered in a mosque in Azaz in the countryside of Aleppo. This group hates any religious act and has its justifications that it finds reasonable. Most of its members are ideologically and organizationally affiliated with parties and organizations that Rifai criticized and attacked in his sermon.”

Lhep said, “The sermon of Rifai is disappointing. He criticized superficial and secondary matters. Some issues are more important to tackle in the Syrian situation.”

Rahaf al-Doghli, a lecturer in the Department of Political Science at Lancaster University, told Al-Monitor, “The seriousness of Sheikh Rifai’s statements in his sermon in Azaz indicates the intertwinement of political patriarchy with social patriarchy, where individualism is dissolved, violence against women is perpetuated, and the political struggle toward freedom and democracy is reduced to a war of ideologies and civilizations between the West and the East.”

She said, “I am not surprised by the discourse of the Sunni sheikhdom, even though it initially supported the ideas of the revolution. Still, it remained molded under its traditional cover and within patriarchal dynamics that refuse to overthrow power in its patriarchal sense, which is politically linked to social domination that considers the authority of masculinity as the only measure of sovereignty.”

Wisam al-Kassom, a member of the General Authority of the SIC, told Al-Monitor, “The attack on Rifai is illogical, because he is a symbol of the revolutionary and societal symbols, and insulting him means offending the Syrians. Claiming that Rifai insulted civil society organizations is a lie. He only mentioned some organizations that want to destroy the family and society. This is a well-known reality nobody can deny.”

Kassom added, “Besides, criticizing Sheikh Rifai for not tackling more important issues like what is happening in Daraa indicates a lack of follow-up to his activities and those of the SIC. In fact, the council issued a statement recently regarding the events in Daraa, and the honorable sheikh gave a televised speech in support of Daraa. His meeting with the minister of defense and leaders of the revolutionary corps and factions revolved around this issue.”

Abu Al-Hartha Tal Rifaat tweeted, “The interest in and celebration of Sheikh Rifai’s visit by civil, military and educational institutions is an indication that Syrians are generally inclined to the right and committed Islamic thought and to demolishing secular paganism, which corrupt parties are trying to spread among our conservative society, and to renewing the pact of standing with the oppressed against the oppressor.”

Shailan Schikh Mousa tweeted, “It is not strange to witness this reckless war against Syrian feminist women who work in civil society, who are struggling to achieve gender equality and who have repeatedly advocated for justice allover Syria.”