A mass grave was found in Azaz in the northern countryside of Aleppo, containing the remains of people who were believed to have been killed during the Islamic State control of the area in 2016. 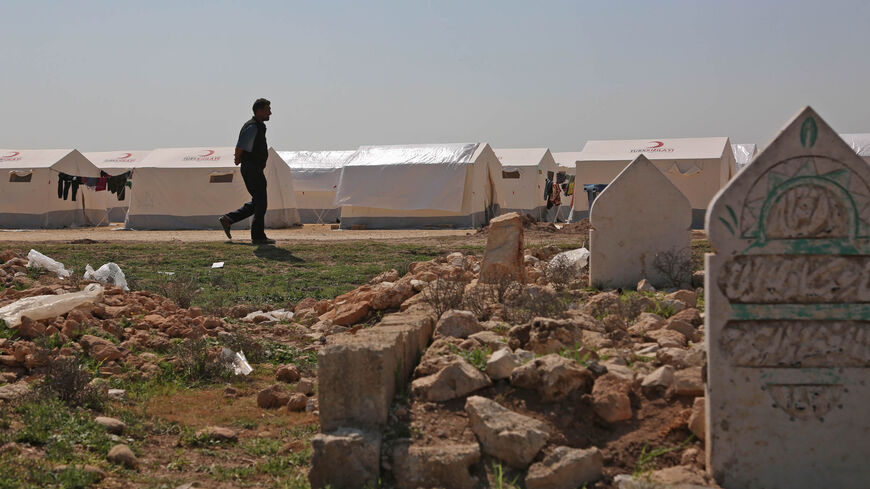 A Syrian man walks past graves at a camp for displaced Syrians from the former rebel bastion of Douma, in al-Bil, east of the rebel-held town of Azaz, Syria, April 13, 2018. - Zein al-Rifai/AFP via Getty Images

Syrian workers at the local council in Azaz have recently found a mass grave during works to expand a road in the eastern countryside of the city of Azaz, specifically in Naddah village, in the northern countryside of Aleppo.

The media office in Azaz’s local council wrote in an Aug. 23 Facebook post that teams of the Syrian Civil Defense, aka the White Helmets, exhumed from the grave the remains of five people, including a woman and a child.

“Search operations in the mass grave have ended and the remains of five people, likely a woman, a child and three men, have been exhumed,” the office said in its statement.

In another post on the same day, the media office said a dilapidated military uniform was also found on one of the bodies, but the details and identities of the bodies remain unknown.

According to local testimonies, the bodies belong to victims killed by the Islamic State (IS) during its operations in the area in 2016.

The armed opposition factions, backed by the Turkish army, had captured the village of Naddah, east of Azaz, as part of Operation Euphrates Shield in October 2016, in the wake of violent battles with IS, which was then controlling the area.

In an interview with Al-Monitor, Abdul Qader Hajj Othman, director of the Azaz media office, said the mass grave was found during excavation works on the Azaz-Soran road, aimed at expanding the road in the eastern countryside of Azaz.

He said, “The forensic medicine team in the city of Azaz has not yet issued its report regarding the identity and time of death of the victims. But local residents in the city of Azaz claim the bodies belong to victims killed by IS during its operations in the area in 2016 near the city of Azaz. How they were killed remains unknown.”

Othman noted, “This is not the first mass grave to be found in the area. Unidentified bodies are repeatedly found in the countryside of Aleppo. On Feb. 18, 2021, members of the Syrian Civil Defense found a mass grave containing five unidentified bodies in the city of al-Bab in the eastern countryside of Aleppo. The discovery was made during the removal of rubble in al-Sad road area on the outskirts of the city of al-Bab.”

He added, “IS and the Syrian Democratic Forces [SDF] both committed massacres. Dozens of opposition fighters were killed in a battle launched by the opposition factions against the SDF in the village of Ain Digna near the village of Ming, which the SDF had controlled in February 2016. At the time, the SDF published a video on the internet showing the bodies of Free Syrian Army [FSA] fighters loaded on a truck that roamed the streets of Afrin before their burial.”

Other mass graves were found near the Menagh military airport in the northern countryside of Aleppo in 2016. It contained dozens of Syrian government soldiers who were killed during the siege imposed by the FSA on the base during its battles with the Syrian army in 2013. Back then reports said 94-100 bodies were exhumed with the help of the residents of the Shiite-majority towns of Nubl and al-Zahraa in Aleppo and in coordination with the Syrian government and the Kurds.

Many mass graves have been found in the east Euphrates areas previously controlled by IS. Others were also found in government-controlled areas between Homs, Hama, Daraa and Aleppo’s countryside, in addition to graves in northwestern Syria controlled by the opposition.

Ahmed al-Dak, media activist based in the northern countryside of Aleppo, who witnessed the exhumation of the bodies in the grave found near Azaz recently, told Al-Monitor, “The service teams of the local council in the city of Azaz who found the mass grave informed the local police force and Civil Defense Forces, who rushed to the inspect the scene. I was accompanying them as a journalist to cover the incident. On that day, five bodies were removed. People in the area reckon they were a woman, a child and three men killed in 2016, but their exact identities remain unknown.”

He said, “As a journalist, I witnessed the discovery of several mass graves in our area in the countryside of Aleppo. These are often left by IS or the separatist militias such as the Kurdistan Workers Party [PKK] or the Democratic Union Party [PYD] in the Afrin area or elsewhere. When the Turkish forces took control of the area and the SDF forces pulled out, several mass graves were discovered, which contained bodies of members of the Turkish-backed Syrian National Army.”

Dak noted, “More mass graves are likely to be discovered. The mass graves prove that massacres took place, especially since the areas here were controlled by many militias, including IS and PKK/PYD militias. The Syrian regime also carried out massacres and left mass graves, mainly for anonymous victims.”

He added, “The buried persons are often tortured before being killed. This proves that these militias are terrorist groups. We call on the international community and human rights organizations to hold the perpetrators accountable and bring them to justice.”

In a report published on July 3, 2018, Human Rights Watch said, “A local group working to uncover mass graves in the area of northeastern Syria once controlled by the Islamic State (also known as ISIS) needs international support and technical assistance to preserve evidence of possible crimes and identify the remains.”

Activists in the area accuse IS of killing civilians and burying them in mass graves during its control of the area.

In late July, the military council of Manbij and its countryside, affiliated with the Kurdish-led Autonomous Administration of North and East Syria, announced the discovery of a mass grave in Manbij city, in the northeast of Aleppo province, containing dozens of bodies.

The council said the victims were killed by IS during its control of the area.

In a statement, the council noted, “During works on the sewage system in Manbij near a downtown hotel, a mass grave containing the remains of 30 civilians, including two women and two children, was found.”

The statement reported that the bodies were found handcuffed and blindfolded.