With Turkey’s help, al-Bab’s local council started issuing new IDs to Syrians who had lost them in the war, a move that will soon be applicable in the entire Euphrates Shield area. 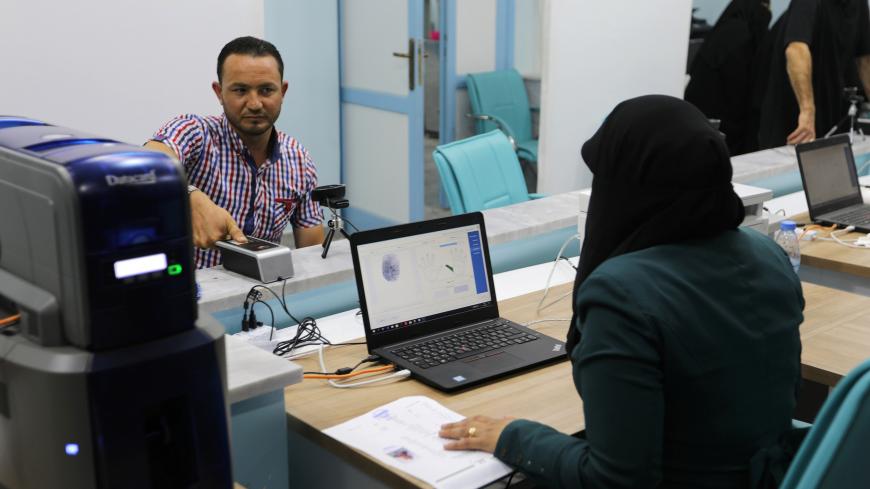 A man scans his thumbprint during the registration process for a new identification card, al-Bab, Syria, July 15, 2018. - REUTERS/ Khalil Ashawi

ALEPPO, Syria — The residents of al-Bab and surrounding towns in the eastern Aleppo countryside began obtaining new identification cards on July 19. As a first stage, al-Bab’s local council, with the Turkish government’s help, issued 140,000 new IDs. The same will apply to other areas in northern Syria that are controlled by the Syrian armed opposition.

In order to be granted an ID, one is required to refer to the census office at al-Bab’s local council to obtain a personal status record for each family member. The documents issued by the Syrian regime’s institutions proving the identity of the applicant are used when applying for an ID.

The city’s officials explained that the new IDs are designed to make life easier and allow them to differentiate ordinary civilians from those suspected of being affiliated with the Islamic State or the Kurdish People's Protection Units. Furthermore, it is a major step for the many Syrians who lost their IDs in the war.

These IDs show the person’s name, family name, date of birth, place of issue, and number in Arabic and Turkish. The flag of the Syrian revolution is seen at the left corner, and the slogan of the local council that issued the ID with the cardholder’s photo is in the right corner.

To receive an ID, residents and displaced persons must have their fingerprints taken and pay 500 Syrian pounds (about $1).

Jamal Osman, the director of al-Bab’s local council, told Al-Monitor, “It was al-Bab’s local council’s idea to grant IDs, which has become a must as many local residents and displaced in al-Bab lost their identity documents. We are grateful for the Turkish government, which provided all of the needed devices, programs, computers, fingerprinting equipment and ID printer. Also, al-Bab’s local council made available a building to house the civil registry directorate.”

Osman added, “All of the local councils in the Euphrates Shield area will be doing so. Most of the councils there, such as Azaz in northern Aleppo countryside and al-Rai in the northeastern Aleppo countryside, started issuing civilians IDs, and soon this will be applicable in all of liberated northern Syria. The Turkish government will recognize the new IDs issued by local councils soon.” He said, “The local council will issue civilians with no IDs personal status records in the future.”

Countless Syrians in the opposition-held areas lost their identity documents over the past seven years, either due to the destruction of their homes or random displacement. Many can’t obtain new documents for several reasons, such as the fear of prosecution and the high fees to obtain them. Identity is proven either through an identification document issued by a regime institution, such as a birth certificate; personal status record or driver's license; or by referring to the civil registry in the opposition-held areas with two witnesses to obtain a personal status record.

In this vein, Aref al-Aref, an activist in al-Bab, told Al-Monitor, “I am from al-Bab and I used to live in al-Mashhad neighborhood in eastern Aleppo during the military campaign of 2016. I lost my identity documents in an airstrike targeting my house. It would cost me my life to go to regime-held areas to obtain them. I am actually wanted by the regime security services because I am an oppositionist and took part in the revolution.”

He continued, “It is a nice move from al-Bab’s local council. Now, I do have an ID that will be recognized by the Turkish government, which would make things easier for me and the many civilians who do not have IDs or family records.”

By helping local councils organize society in northern Syria — particularly those councils in areas the Turkish army helped seize from the Islamic State such as al-Bab and from the Women's Protection Units (YPJ) such as Afrin — Turkey seeks to establish a large presence. This would undermine the Syrian regime and its allies’ efforts to carry out a military action in northern Syria, which is the last stronghold of the Syrian armed opposition bordering Turkey.

Ankara believes that it is in its advantage that northern Syrian be safe and secure, and it is well aware that the ongoing chaos there will provide the Syrian regime and its allies with another pretext for an offensive, which will result in hundreds of thousands of civilians being displaced and heading toward border areas — which Turkey is working to avoid.

In addition, there was a recent rapprochement between the Syrian regime and the YPJ, with the latter expressing willingness to join a military action against the armed opposition factions in northern Syria. Turkey will reject the presence of any Kurdish military faction near its borders. This being said, organizing society and restoring security with Turkey’s assistance in northern Syria promotes Ankara’s stance, provides Turkey with a stronger foothold in the country and wards off any future attempt by the regime and its allies to restore areas it does not hold in northern Syria.

Syrians who no longer have their identity documents and are based in the opposition-held areas believe that the local council’s move is essential, particularly since the new ID will be recognized by Turkey, a neighboring country where more than 3.4 million displaced Syrians reside. These displaced Syrians are counting on the local councils’ efforts to issue them passports that are recognized by the international community, with Turkey’s assistance. The Syrian passport issued by regime institutions has become one of the most expensive internationally, as Syrians living abroad are required to pay $800 to immediately obtain a passport that is valid for two years or pay $300 for one that will be issued in 12-21 days.

As for the Syrian regime, so far it has not voiced a stance on the local council’s step to issue IDs in northern Syria.