After taking hold of Idlib, Hayat Tahrir al-Sham sought to expand control over the Free Syrian Army-held areas in the Aleppo countryside by marketing its alleged security and civil administration successes and the lack of security in the FSA areas. 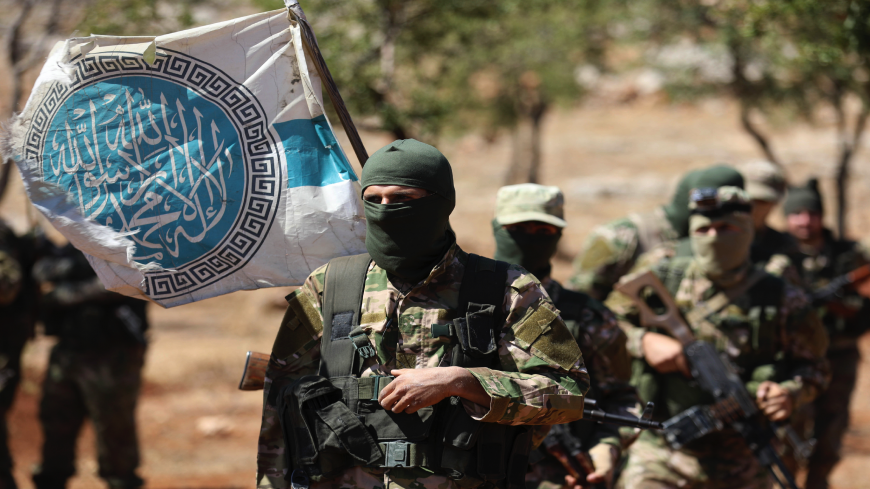 Syrian fighters attend a mock battle in anticipation of an attack by the regime on Idlib province and the surrounding countryside, during a graduation of new Hayat Tahrir al-Sham (HTS) members at a camp in the countryside of the northern Idlib province on Aug. 14, 2018. - OMAR HAJ KADOUR/AFP via Getty Images

ALEPPO — Hayat Tahrir al-Sham (HTS) has seemingly come a long way in seizing control over Idlib and aspires to expand that control at the Turkish-backed opposition's expense in northwestern Syria. Since early 2019 and after battling Free Syrian Army (FSA) factions, HTS has directed its attention to the development of the civil administration’s work and provided its affiliated Syrian Salvation Government with additional powers to set up institutions and bodies to manage civil action.

In the security sector, HTS portrays itself as the de facto ruler in its areas of influence and promotes its alleged success through the pursuit of Islamic State (IS) cells. The HTS general security apparatus announced Jan. 13 a security operation targeting an IS cell in the Idlib countryside.

Speaking to Al-Monitor, Mahmood Talha, a journalist for the local Thiqah news agency, said that “HTS publicizes itself as a popular de facto authority. In its supporters' view, it is an anticipated and inevitable outcome based on its alleged success in creating a governmental and security system. Such allegations on the civil administration in Idlib are deceptive, and many institutions are only pro forma and have no significant efficiency, such as health and education bodies. This is while the Salvation Government gives attention to institutions through which it collects money and imposes taxes, such as the state property administration, the checkpoints, crossings, bakeries, fuel and transport administrations, as well as the camps affairs and humanitarian affairs directorates, and the municipalities directorate that has recently imposed fees on building permits.”

While HTS is recognized as a terrorist group by the United States and the UN Security Council, the US has focused its fire more recently on Haras al-Din, a more radical offshoot. Although HTS has worked to present itself as a more Syrian nationalist force and claims to have severed organizational links with Al-Qaeda, Damascus and Moscow continue to lump it as an offshoot of the latter. UN reports have cited human rights abuses and “war crimes” by the group.

In parallel to HTS and the Salvation Government — which the group is affiliated with — celebrating their alleged success in the civil administration in Idlib, another success in managing the security dossier is being promoted in a no less deceptive way. The Salvation Government’s media directorate, as well as the official and alternative media of HTS, intensifies propaganda in this vein. HTS commander-in-chief Abu Mohammad al-Julani’s frequent appearances lately are in line with the publicity policy the group adopts.

Zahabi, edressi1, al-shamali_alhr, i3lamisory and many others are the pseudonyms of HTS communicators and commanders who have Telegram accounts where they promote their security and civil administration successes. Their organized campaign reflects the HTS ambition to expand at the expense of the opposition. That consists of an alternative tactic of direct confrontation. Zahabi indicated on Telegram that “despite the mistakes made by the one managing the liberated [areas] in Idlib, it is the best suited [group] to manage the entire liberated [parts] and impose full control not only over Idlib but over every part that does not fall under Russian and Iranian control.”

Abdul Wahab al-Assi, a researcher in Gaziantep who works at the Jusoor for Studies Center, told Al-Monitor that “HTS is looking forward to expanding in the FSA-held areas in northern Aleppo in a way that is not only limited to the security side, which it is seemingly able to somehow ensure effectively. The counter-propaganda and focus on the lack of security in the faction-held areas greatly serve these ambitions.”

Assi said that “the thing that impedes HTS’s safe access to the faction-held areas in the Aleppo countryside is the lack of any intellectual favorable environment. The local residents and societal groups reject its existence and adopted the national army’s narrative that HTS is to be blamed for undermining the Syrian opposition forces’ influence and for standing behind the violations committed against the armed factions, activists and others, and for the major failure of the Salvation Government despite the abundant resources and lack of competitiveness.”

Assi added, “HTS does not miss any opportunity to achieve an ideological and psychological breakthrough in the faction-held areas. It is exploiting the large security gap there and blaming security and military agencies for that, considering them to be a part of the problem. Also, it is marketing the security model in Idlib. Yet, even though HTS is able to undermine the people’s confidence in the advantage of continuing to uphold the opposition factions’ narrative on their relations, this breakthrough will not serve effective access, given that control and power sources are being shared.”

Speaking to Al-Monitor, the FSA Mutasem Brigade’s political bureau director Mustafa Sejari noted, “HTS is ambitious to expand at the expense of the FSA factions and worked in advance to tarnish the reputation of the factions by accusing them of treason and militarily attacked them so as to take control over Idlib. Today, it is tarnishing the reputation of the national army paving the way for their offensives. Julani was not and will never become a leader, except for the bandits who are affiliated with him.”

Orabi Abdulhay Orabi, a researcher of Islamic groups, told Al-Monitor, “HTS aspires to be a local faction that would be internationally accepted. Being internationally accepted means that this faction can be relied upon in various matters, including the security file and other tasks. In case it succeeds in expanding toward the Olive Branch and Euphrates Shield areas, it will win bigger popularity and probably a stronger political ground, enabling it to negotiate with Turkey and other countries. It really aspires to expand at the expense of the FSA in the Aleppo countryside. That can be seen in its alternative media.”